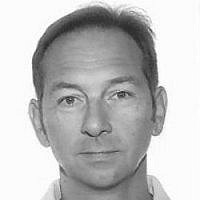 The Blogs
George van Bergen
Apply for a Blog
Please note that the posts on The Blogs are contributed by third parties. The opinions, facts and any media content in them are presented solely by the authors, and neither The Times of Israel nor its partners assume any responsibility for them. Please contact us in case of abuse. In case of abuse,
Report this post. 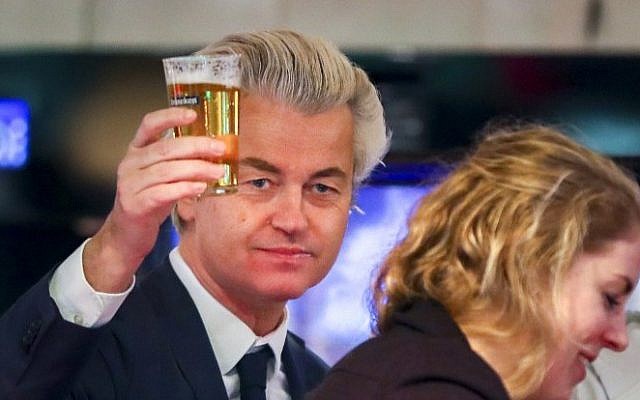 Dutch member of Parliament and leader of the far-right Party for Freedom (PVV) Geert Wilders, center, raises his glass in a cafe during a visit to the town of Volendam, on March 3, 2017, ahead of March 15 general elections. (AFP/ ANP / Jerry Lampen)

A sigh of relief emanated from the offices of leaders across Europe as incumbent Prime Minister Mark Rutte’s center-right Liberals declared victory in the Dutch parliamentary elections. Rutte had, in his words, beaten “the wrong kind of populism,” that preached by firebrand populist Geert Wilders’s Freedom Party.

But the conclusion of most pundits that the Dutch stopped the wave of populist anger that propelled the UK out of the EU and Donald Trump into the White House may be too simple. A closer reading of the Dutch election results tells a somewhat different story.

While over 80% of potential voters turned out on March 15, Rutte’s VVD attracted only 21% of the vote, down from its 26% share in the outgoing parliament, and close to the worst showing for a first-place party in the history of the country’s no-threshold, proportionate representation system. Wilders’s party increased its share from 10% to 13% and came in second, just ahead of the conservative Christian Democrats. Significantly, the conservatives, who are indispensable to forming any government coalition, took a page from the Wilders playbook by declaring radical Islam a threat to Western democracy, and highlighting the need for a revival of national identity. Their share of the vote increased from 8% to 12%. In addition, a new party entered parliament on a platform opposing EU membership and the political establishment, adding another 2% to that side of the argument.

The VVD’s junior coalition partner, the Labor Party, suffered a historic defeat, falling from 25% to less than 6%. This drop signifies a clear rejection of the policies of the outgoing government, which went from a majority of 80 seats out of 150 to only 42.

Even by Dutch standards, the new parliament is highly fragmented, and at least four or five parties will be necessary to achieve a majority. Normally the runner-up party would be involved in negotiations to form the new government, but both Rutte and the center-left D66 have declared they will not consider a coalition with Wilders. Talks, at least at first, will be limited to the mainstream center-right and center-left parties. Here is the catch.

Such a broad-based government, even if it can be assembled, will have to bridge wide gaps among the partners on a range of socioeconomic, ethical, EU and foreign policy issues, while Wilders’s supporters remain as concerned as ever about what they view as a political establishment disconnected from much of the populace. And indeed, even many who voted for the center-right agree with their worries about immigration, poor integration, and identity, the threat from radical Islam and terrorism, misgivings about the EU, a desire for a return to national sovereignty, and resentment about the economic effects of globalization. A quick look at the facts shows why.

Of the country’s 16.9 million people, 2.1 million are non-Western migrants, mostly Turkish and Moroccan, and their Dutch-born children. Pew Research calculates that about 1 million of those — 6% of the population — are Muslim. The number of Muslims increased by an estimated 1% annually over the last ten years.

The likely continued growth of the migrant population, together with this failure in integrating them, risks exacerbating the situation. Any likely Dutch government will have to reckon with the divergent election platforms of the coalition parties, probably resulting in a bland program that does not fully satisfy anyone. And since the government will likely include parties from the center-left that do not share Wilders’s populist concerns, his job in the opposition could become easier, setting the stage for a potentially better showing in the next elections. The crisis, then, has been at best delayed, not solved.

Failing integration is not exclusive to the Netherlands. Even though Wilders did not come in first, these issues will feature prominently in elections later this year in France, Germany, and Italy, and in the discourse of their populists and right-wing parties. Thus the center parties in Europe should resist the temptation for self-congratulation in the wake of the Dutch election.

Those who vote for Le Pen, Wilders, etc., are struggling with real problems. If responsible mainstream parties won’t acknowledge and tackle them, and neglect to look beyond obvious but insufficient economic solutions, the populists will eventually win. You don’t need a crystal ball to figure this out, but clarity of vision is required. Let’s hope they have it, and use it.

George van Bergen, a Dutch citizen, is Deputy Director of the AJC Transatlantic Institute in Brussels.

About the Author
George van Bergen is Deputy Director of the AJC Transatlantic Institute in Brussels.
Comments