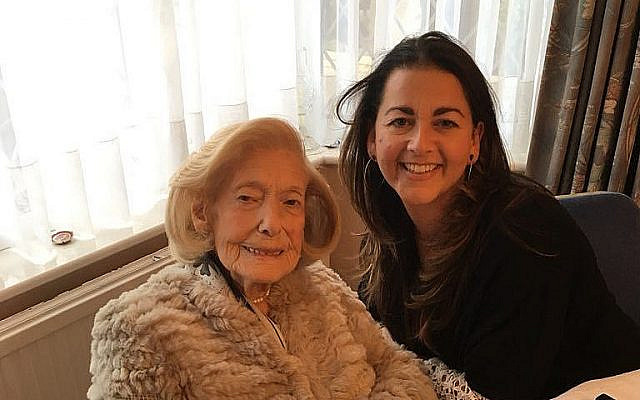 Karen with the late Gena Turgel

This year, as we mark Holocaust Memorial Day, we are encouraged to find light in the darkness.

It is strange to look for light in such a dark episode. But there are glimmers of light.

There is light in the stories of those who, despite the risks, resisted or fought the Nazis. Whether they smuggled Jews to safety, forged false papers, or hid Jews in their homes, these people – ordinary people doing extraordinary things – made a difference.

There is light in small acts of kindness that happened across occupied Europe, from the farmer who gave a pregnant prisoner a glass of milk during her transport to a camp, to the mum who saved all of the potatoes peels she could for her children, despite being starving herself.

There is light in the stories of those who liberated the concentration and death camps, saving the lives of the few weak and emaciated prisoners still left alive.

And there is light today, in the courage and dedication of our elderly Holocaust survivors who, despite all they have endured, refuse to stop sharing their darkest memories.

This year’s Holocaust Memorial Day theme was born out of the words of one of the strongest and most indomitable people I have ever met, my friend, mentor and hero, the late Gena Turgel MBE.

Gena was just 16 when the Nazis occupied Poland. She and her family were forced in to the Krakow ghetto and from there to the Plaszow concentration camp. She went on to survive Auschwitz, before being sent to Bergen-Belsen where she was eventually liberated by British forces. Among the British soldiers who liberated her was Norman, who went to be become her husband. She lost five of her siblings during the Holocaust, and a number of members of her extended family.

Gena passed away in 2018, but her light cannot and will not be dimmed. Thanks to her indefatigable determination to tell the world what had happened during Europe’s darkest days, her story, and the story of 6 million Jewish men, women and children, will be remembered.

This Holocaust Memorial Day, we light a candle in memory of Gena, and her fivebrothers and sisters who were brutally murdered in the Holocaust, all those persecuted and killed by the Nazis, and all those who have been murdered in genocides since. And we pledge that her light, and the light of all of these stories, will glow in the darkness.