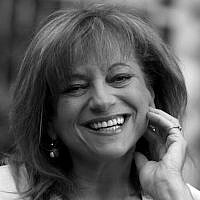 The Blogs
Hila Solomon
Apply for a Blog
Advertisement
Please note that the posts on The Blogs are contributed by third parties. The opinions, facts and any media content in them are presented solely by the authors, and neither The Times of Israel nor its partners assume any responsibility for them. Please contact us in case of abuse. In case of abuse,
Report this post.

“Mon petit chou-fleur” were amongst the sweet words first whispered in my ear by the handsome French clarinetist, who would, for a while, become my great love and husband. At the time, I didn’t think being called a cauliflower was a term of endearment, but rather some twisted dig at my being curly headed vegetarian in those days. The vegan equivalent, if you were, of the other most eloquent French words of love, ‘mon petit canard’.

Cauliflower has always been one of my favourite vegetables, and research for this piece has proved it to be beloved company to many wise, creative and conservative people alike. . Ask anyone you know for their first association with this rather strange ‘flower’ and they will describe it as ‘meaty’, substantial, and ‘tender’ . 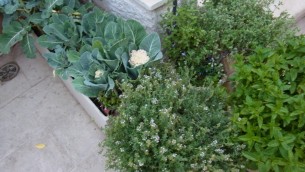 cauliflowers are easy to grow amongst garden herbs, even in pots [photo hila solomon]

My earliest memories are of my paternal grandmother’s “cauliflower bhaji”, made with the ubiquitous ginger, garlic, and turmeric, accented with a touch of mint and lemon. Later in life, the Frenchman’s gratin au chou-fleur still evokes wonderful moments in Parisian cafes during winter, when the windows steamed in protest at the cold outdoors, whilst we bohemians sipped wine and revelled in the end-smoke of gitanes. These days I’ll travel to Ramle, near Lod, down a seedy old road to an unpretentious workers’ café to find the best cauliflower “machsi’, where the tiny florets have been coaxed apart and exquisitely filled with ground meat, and then are baked, whole. .This recipe is an art form that has been passed down through 5 generations of Iraqi women.

A Tel Aviv urban legend about a trendy bistro’s whole cauliflower, followed by a surprise gift for my vegetable garden last year, from a shepherd, announced my crusade to immortalize this sexy vegetable. I lovingly planted what I was told was kale. The plants began to grow, and suddenly the shepherd and I were parents to a crop of orange cauliflowers, nurtured between exquisite textured green leaves. They survived the terrible storm of 2013 and the snows. Had they been irradiated by falling trees and power lines? Cauliflower is white I thought.

Scientific investigation proved that the Shepherd’s gift was in fact a rare species that had been first identified around 1970 in Canada. It took a 30 year journey over 2 continents from farm to laboratory and then table, to understand that this smaller mutant, although less tasty than the common white cauliflower, offered more than its alluring colour. The florets of this new cauliflower contain carotene and around 25 times more vitamin A than its white cousin.

The legend was found in Tel Aviv’s Abraxas North bistro, and has now become a signature dish at my Salon, Spoons in Jerusalem. I have created the technique and recipe below as an interpretation simply by seeing and tasting it only once in Tel Aviv in order to produce a sensual, succulent and dramatic artwork, easily produced in a domestic kitchen.

The secret is to find the finest and freshest white cauliflowers, preferably from a market or organic grower, where the florets are hard and crunchy and not all limp and yellow. Ensure that the leaves are not yellow or marked by bug holes or mould.

White is the preferred veggie here, not the purple, yellow, green or orange varieties. Low carbohydrate dieters can enjoy cauliflower as a delicious alternative to potatoes or rice, because they lack the starch of these others. 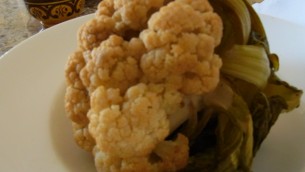 serve the whole baked pampered cauliflower on a serving plate, with much aplomb and splendour! [photographer hila solomon]

Place a whole cauliflower, with its leaves in tact, in a glass or stainless bowl, and cover it with cold tap water, adding about 3 tablespoons of white or apple vinegar. This is to kill any bugs or other secret agents that might be hiding out in the florets. It has the added benefit of crisping up the leaves. Leave for about 5 minutes in this bath and then throw out the water and rinse

Return the cauliflower to the bowl and now cover it entirely with boiling water and add about 3 tablespoons of course kosher salt to the bowl. Cover with a saucepan lid or aluminium foil. Leave for another 5 – 8 minutes in this salt bath. You should place the cauliflower floret side up first, and then turn it over so that the flesh is in the water and the leaves on the top.

In the meantime prepare another large bowl with an ice bath [ cold water chilled with ice.] to reverse the blanching process.

Preheat your oven to 200 c. Prepare a baking tin that will hold the entire whole cauliflower by greasing with around 1/4 cup of fine olive oil.

When the cauliflower has been in the salt bath long enough, remove it, and place it in the ice bath, leaves side first, and then turn it floret side down. This process takes around 2 minutes.

We are now ready for the 2 – 4 hour baking process! You can bake one or multiple cauliflowers at one time having gone through the prep above.
Place the beauty in the prepared oven tray, flesh side up. Drizzle another 1/3 cup virgin olive oil over the florets, and add another sprinkling of course kosher salt. Cover the entire baking dish first with parchment paper and then with foil.

Place in the oven, and check say after one hour. Enjoy the delicious aroma of vegetable and oil drifting through your kitchen. Check the condition of the flesh. Re-cover. At some point if the cauliflower is not browning covered, but not until at least one hour has past, uncover the baking tray and return it to the oven. I find that it’s important to tip out the pan liquids that have been produced in order to avoid burning and smoke that might be ignited in the oven as the oil hits oven filters.

When ready, rest the cauliflower in the pan for around 10 minutes.
I love hearing the ‘wow’ when I serve this on a large serving dish, with a spoon and knife, and guests enjoy the dramatic entrance and then the dance of cutting and serving it..

About the Author
Hila Solomon is a writer and restauranteur, chef, and food consultant who lives and works in Jerusalem. Originally a designer , Hila created "Spoons" as a private dining room or "salon" in an historic stone house in Yemin Moshe, Jerusalem. Considered one of the top 6 culinary experiences in the nations capital, Spoons weaves a sensual interaction between design, history, finest wines and flavours, music and people. It's the address for an exchange of ideas and meeting of minds, as well as a world of adventure. Hila welcomes ViP travelers to her house, including heads of state, members of the diplomatic community, politicians, business leaders, writers, philosophers, artists and musicians. Strictly by reservation only, a group of 8 – 36 guests can enjoy this insider's view of Israel. Menus are designed for each group, and guests choose either a kosher meat or a kosher dairy menu. Several times a year, Hila runs boutique culinary tours in Israel to places of excellence known only to 'insiders' or professional foodies
Related Topics
Related Posts
Comments