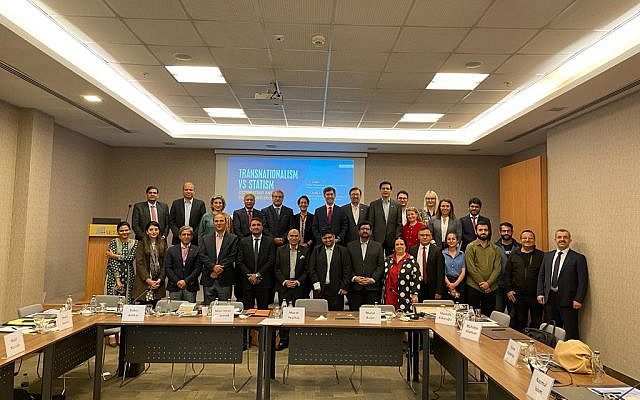 Lone wolf attacks have started in Israel, detonators were found in the Indian state of Maharashtra. Terrorism attacks in both Israel and India is on the rise, after a seeming uneasy period of calm. A senior member of the Israeli counter terrorism unit was killed in a “complex” operation. Most “credit” for these attacks is being taken by ISIS units, much to say that other terrorist organizations have now turned peaceful. A recent meeting of scholars, soldiers, intelligence officers was held in Istanbul by the Turkish think tank Foundation for Political, Economic and Social Research (SETA), where Mustafa Craner addressed the participants. This was the first Turkish-Pakistan security dialogue and Craner called the step of reviving the Islamabad-Tehran-Istabul train a step in the right direction. Nazir Hussien, a Pakistani scholar, accused India and Israel of unleashing terror in Kashmir and Palestine. This meeting, at the highest strategic level in Turkey, a country with whom Israel has relations, does not bode well for the future of security. This also brings into play the experience of the Pakistani army into what may be future operations against the state of Israel, especially as former Prime Minister Imran Khan protests the imminent recognition of Israel by the current Pakistani government.

For many years, Pakistanis at the highest level claimed that Osama Bin was dead. The former military dictator and stalwart ally of the West, General Pervez Musharraf, said on numerous occasions that Osama was in all likelihood dead. But as it happened, not only was Osama alive, he was comfortably ensconced in a safe-house a stone-throw away from the Pakistan Military Academy, near Abbottabad.

After the Americans assassinated him in 2011, Pakistan’s government feigned ignorance about Osama’s presence. With injured innocence, the Pakistanis insisted that had the information about Osama been shared with them, they would have dealt with him themselves. The only problem was that there were many occasions when the international coalition forces had shared intelligence with the Pakistanis, only to discover that the ‘persons of interest’ had escaped. When it comes to terrorism, the Pakistan’s playbook is not very difficult to decode. The default setting is to deny everything and cover up the tracks. When denial doesn’t work, Pakistan takes the plea that the people accused of terrorism are not from Pakistan.

If the pressure mounts to a point where the state is forced to demonstrate action against these elements, it either does an eyewash of a prosecution, or else it declares these elements have bolted and cannot be located. If the pressure still doesn’t reduce, then some of these more notorious individuals are declared dead. It is only if despite being pronounced dead, there is unrelenting pressure to produce proof of death of a wanted terrorist that Pakistan’s ‘deep state’ performs the miracle of resurrecting a ‘dead man’. These has also been a case where a man who had actually died – Taliban Emir-ul-Momineen Mullah Omar – was kept ‘alive’ and was issuing diktats from his grave.

The playbook strategies have unfolded right in front of the eyes of the international community numerous times. But these have been ignored or brushed under the carpet because terrorism emanating from Pakistan was always seen as a regional problem (India), and not something that affected the West or Israel.

But this is not really true. The fingerprints of Pakistan have been found in virtually every major terror attack in the West, even the failed ones. The attempted Times Square bomber was a Pakistani origin US citizen. The Pakistanis claimed that since he was a naturalized US citizen, it had nothing to do with them. This despite the fact that he developed links with Pakistan based terrorist groups, some of whom were linked to the Pakistani state. When the 7/7 London Train bombings took place, and its main accused Rashid Rauf turned out to be a Pakistan-origin Briton, the Pakistan government washed their hands by saying that they had nothing to do with the bombing. What they didn’t say was that Rauf was radicalized and received training and support from inside Pakistan.

That Rauf was related through marriage with the Jaish-e-Mohammed Chief Masood Azhar, despite his being one of the most wanted terrorists, no worthwhile action was ever taken. He and his brothers who ran the dreaded UN designated terror group JeM were always allowed to get away scot-free. Whenever pressure mounted, they would claim they couldn’t locate him. Eerily, different Pakistani leaders gave different explanations – former Foreign Minister Shah Mehmood Qureshi claimed Azhar was very sick in a hospital, even as his own colleagues claimed that they had no idea of Azhar’s whereabouts.

Then there is the case of the Lashkar-e-Taiba (LeT) Chief Hafiz Saeed was presented to the world as a philanthropist and whenever the pressure mounted, had a few cases slapped against him. But all these cases were flimsy, designed to not hold in any court of law. Even when convicted by lower courts to defuse the pressure on Pakistan, superior courts would invariably let him off the hook. The Dawood Ibrahim case is another one. Despite Red Corner notices against him, and evidence that he was based in Karachi from where he was running his criminal empire with the help and involvement of the ISI, the Pakistanis have denied his presence in Pakistan.

After the Mumbai terror attacks, Pakistan initially washed its hands off the entire incident and claimed it had nothing to do with them. They denied the attackers were Pakistani. After Ajmal Kasab was captured alive, the Pakistanis first denied he was a Pakistani. Then they put out a narrative that Kasab was kidnapped from Kathmandu and became a fall-guy for a ‘false flag’ operation by Indian intelligence agencies. When it became known that Kasab was from a small town called Faridkot in Okara district, Pakistani officials at first claimed there was no Faridkot in Pakistan. But since this lie had no buyers, they admitted Kasab was a Pakistani, but insisted he was a non-state actor.

There are innumerable other cases where Pakistan has gone out of its way to deny something for which there is overwhelming evidence. But what really makes things worse is their verbal and legal gymnastics on the issue of Sajid Mir, the mysterious mastermind, who remote controlled the murder and mayhem that Pakistani terrorists carried out in Mumbai in November 2008 (26/11). Paradoxically this attack sealed the bond in between India and Israel’s security services.

When Sajid Mir’s name first cropped up, the Pakistanis feigned complete ignorance. They pretended that nobody by the name and the description existed. This despite the fact that Sajid Mir had been convicted in absentia by a French Court. His name had cropped up in cases in other jurisdictions like Australia, US, Denmark, UK and US both before and after the Mumbai attacks.

Later, when the pressure became too much, especially after the FATF started insisting on Pakistan demonstrating intent through action, the Pakistanis declared that Sajid Mir had died. But the matter did not end there because the FATF sought information about the investigations that Pakistani authorities had conducted before they discovered that Sajid Mir had ‘died’ and also information they had gathered to actually confirm his death. The FATF demanded additional information and desire to know what these investigations had revealed about Sajid Mir’s role in LeT.

In 2021, Pakistan formed a Special Task Force, led by the Federal Investigation Agency (FIA), to pour over and review all the information that had been gathered about Mir. The Task Force reached the conclusion that the leads they followed suggested that the profile of Sajid Mir fit the man who they had discovered had died. The FATF was informed that the Task Force had verified (with the help of photographs and witnesses) that the picture of Sajid Mir with the dead man, the address of the deceased was the same as that of Mir’s father, they had identified his grave and were undertaking forensic analysis to re-confirm the identity of the dead man. As for his role in LeT, the Task Force interrogated LeT cadres who confirmed Mir’s association and involvement with LeT. Pakistan pleaded with FATF that since the man was already dead, he could not be prosecuted. However, FATF was assured that Mir’s association with LeT will be investigated and prosecuted.

Despite trying to sound very convincing, Pakistan wasn’t quite able to convince the FATF which continued to seek more clinching evidence in Sajid Mir affair. Finally, last April Pakistan was forced to come clean. Pakistan reported to the Asia Pacific Group that the forensic analysis revealed that while the dead body in the grave was the child of Sajid Mir’s mother, there was no conclusive evidence that the body was of Sajid Mir. After this the Pakistanis gave an elaborate and long-winded explanation of how hard they worked to get to the bottom of the Sajid Mir mystery.

They revealed that their investigation revealed the linkages between properties owned by LeT and the terror financing activities of Sajid Mir. They also were able to ‘identify’ an individual who fit the profile and description of Sajid Mir. Finally, in the third week of April they managed to ‘apprehend’ Sajid Mir. Thus the man who had been proclaimed dead and buried had been resurrected. What is more, he has been booked on charges of involvement in terrorist attacks by LeT and for managing the terror finances of LeT. The FATF has been placated. The Pakistanis have expressed confidence that they will also be able to successfully prosecute and secure conviction against Mir and assured the FATF that it will be kept in the loop on the proceedings against Mir in the courts.

The resurrection of Sajid Mir and his arrest and prosecution is certainly a big victory for the FATF its processes, procedures and pressure it built on Pakistan. It is a demonstration that when the international community works to a purpose, terrorists can be brought to justice. But the entire Sajid Mir affair also raises many serious and disturbing questions over the games that Pakistan blithely plays and uses dissimulation on terrorism cases. Rather than lauding them for finally coming clean on a notorious, brutal and ruthless terrorist like Sajid Mir, Pakistan needs to be called out for denial and deception on this individual and not given a clean chit as it would reverse the gains made. It is critical that this pressure be maintained to ensure that Pakistan lives up to the high level political commitments it has made to FATF and not only prosecutes but also punishes the terrorists that have wreaked so much death and destruction not just outside Pakistan but also inside. Otherwise it wont be long, with the Taliban in Afghanistan that the ghosts of 9/11 and 26/11 come back to haunt us.