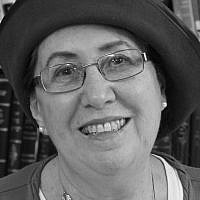 The Blogs
Chana Henkin
Apply for a Blog
Advertisement
Please note that the posts on The Blogs are contributed by third parties. The opinions, facts and any media content in them are presented solely by the authors, and neither The Times of Israel nor its partners assume any responsibility for them. Please contact us in case of abuse. In case of abuse,
Report this post.

Voyeurism in the mikveh is a grave violation of Jewish law and of the sacred trust between a community and its rabbi. It is particularly loathsome if, as charged, it involved abuse of converts who placed their trust in the converting rabbi. I wanted to believe that Rabbi Freundel was innocent of the charges leveled against him. Now, as details surface from day to day, I pray that this episode will not undermine religious observance and the work of thousands of devoted women who serve in mikvaot, rain and shine. Mikveh is a sacred religious obligation that Jewish women have performed faithfully for thousands of years, and so must it remain.

Rabbi Freundel will have his day in court. Wherever the truth lies, the allegations spotlight an anomaly that needs correction. While Orthodox communal institutions serve men and women alike, women are generally under-represented or absent from supervision. Their absence is particularly acute in the case of mikvaot, whose principal clients are women, and whose supervisors are typically men.

Mikveh is a holy and private space for the community’s women, and it is a place where not just water runs deep. Consider a space overflowing with the prayers, vulnerability and emotions of women in fertility treatments, women recovered from or in treatment for cancer, women hoping for better in their marriages, less observant women trying out a religious ritual for the first time, victims of domestic or sexual abuse, and women dealing with all the commonplace challenges of life.

Most mikvaot today are well-run, and supported by tireless, unsung work of women and men. But the present allegations should serve as a warning signal, and prompt us to correct conditions that invite abuse. If in the past we lacked female Torah scholars who could supervise mikvaot — today that has changed. By this summer, Nishmat, The Jeanie Schottenstein Center For Advanced Torah Study For Women, will have qualified more than 100 Yoatzot Halacha, women scholars in the laws of mikveh and Family Purity. Nine are presently serving in North America with widespread rabbinic backing, and later this year, they will be joined by seven more who are presently studying to be Yoatzot Halacha through Nishmat’s Miriam Glaubach Center in the US. These women could serve as regional mikveh supervisors, working closely with community rabbis.

Educators must teach and inspire women to use the mikveh faithfully. But it is the community’s and its leadership’s responsibility to prevent abuse and to create the conditions that encourage proper observance. No man should have the keys to a women’s mikveh. The time has come to listen to the needs of women and to include women.

About the Author
Rabbanit Chana Henkin is the founder and Dean of NISHMAT, the Jeanie Schottenstein Center for Advanced Torah Study for Women in Jerusalem. In 1997, she pioneered the concept of Yoatzot Halacha. Nishmat remains the only institution in the world training Yoatzot Halacha.
Related Topics
Related Posts
Comments