I happened to hear about Father Patrick Desbois in 2013 when I read the article: “Holocaust Researchers Catalog 42,500 Nazi Ghettos, Camps; Numbers Are ‘Unbelievable’” 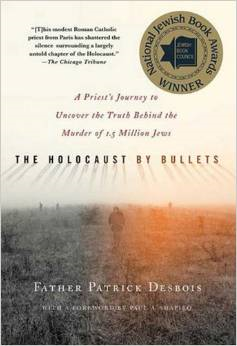 The telling and documenting the mass killing of Jews in Europe has been an ongoing saga. Additional shocking facts appear on a regular basis and with each revelation the dreadful murder of 6 million Jews, among them 1.5 million children, only gets uglier and more horrific. The Holocaust is the trauma of the Jewish people, which cannot be shaken off.

Several months ago I had the honor to meet the Yahad In Unum team, its headquarters is Paris, France: Father Patrick Desbois, Marco Gonzalez and Patrice Bensimon. They were in Los Angeles for the opening of their organization’s exhibition ‘Holocaust By Bullets,’ at the Los Angeles Museum of Holocaust, also the title of Father Desbois’ book: The Holocaust by Bullets: A Priest’s Journey to Uncover the Truth Behind the Murder of 1.5 Million Jews. 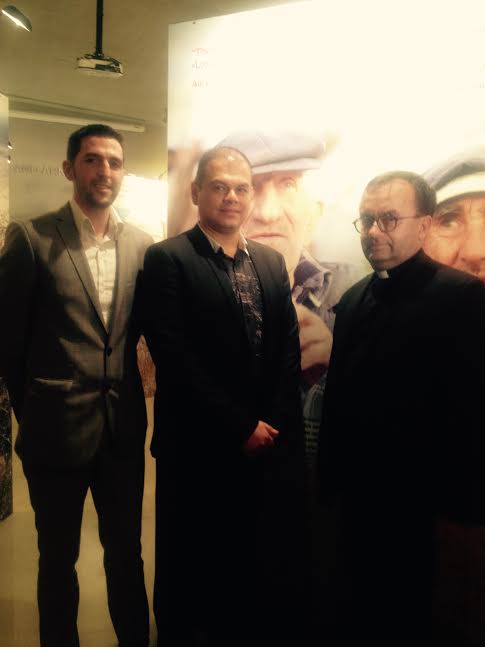 I was blessed with the honor to interview Father Desbois, whose mother’s tongue is French and in command of the Hebrew language, which he learned in an Ulpan (a special school in Israel where you learn to speak Israel’s national language, Hebrew) in Israel. Sitting opposite him during the morning hours interview, he appeared to be tired, often on the phone, tense and extremely sincere about his mission to unveil as many unknown mass graves of Jews in East Europe and in a relatively short time. 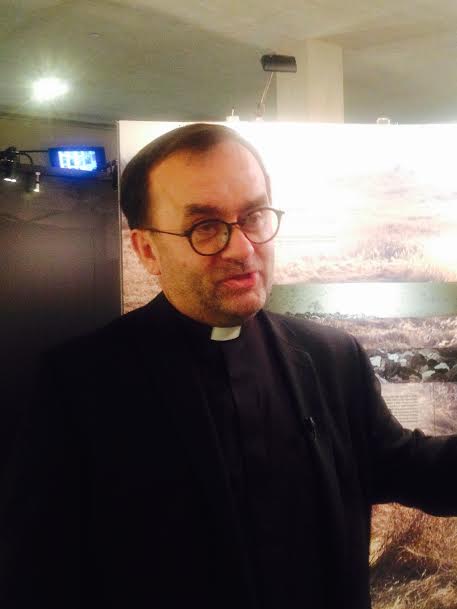 My first question, which I am sure every interviewer asks Father Desbois was: “What drives you to do what you do?”

FD: “In 1942, during WWII, my grandfather was a soldier. He was deported by the Nazi occupying force from Strasbourg (France), to the Ukraine. He managed to escape from his incarceration three times. On his last escape he was in Strasbourg’s train station on his way to Burgundy to join his family. A woman recognized him and called the German Gestapo and he was deported to Rava Ruska (http://en.wikipedia.org/wiki/Rava-Ruska), a small border town between Ukraine and Poland. At the end of the war he was freed by the Red Army. My grandfather never spoke to anyone about his war experience. No matter how many times I asked, he remained silent. Eventually, one day he told me that ’in the camp there was no food and nothing to drink but outside the camp it was much worse.’ As a school age child I could not understand what could be worse than being locked in a prisoners’ camp, but my grandfather did not say anything else.“

One day Father Desbois decided to go to Rava Ruska to build a memorial for the prisoners. He knew that in that town the Germans killed 18,000 Jews. When he asked the officials at the municipality where the mass grave of the Jews, no one was willing to speak up. “They always said the Jews were killed in secret,” Father Patrick continues his story to explain to me what drives him to do what he does.

FD: “When a new municipality was elected in Rava Ruska, the new mayor, Mr. Yaroslav, took me to a small village where 50 farmers were waiting for us. I was told that we arrived at mass grave of the 14,000 Jews of Rava Ruska, killed in December 1942. The farmers began to speak up. At that time they were all children and teenagers who witnessed the killing. They remembered that at first one German on a motorcycle arrived; he scouted the surrounding and then left, to later learn he was a ‘mass grave digging specialist.’ That was the sign that what will follow suit will be the digging, because during his abrupt visit this German planned the site and the size of the digging. A day later two Germans arrived and with then were 30 Jews riding on a truck. The Germans forced them, at gun point, to dig. The witnesses remember that the Germans watching over the diggers wanted to hear music, so they put a gramophone on a table and one of them even played the harmonica he brought along. Pieces of the harmonica were found when we were digging around the mass grave, and is used for evidence. The Germans went further and demanded of the farmers to bring them two cooked chickens to eat. When the dig was deep enough the German guards told the Jews, who were busy digging none stop, to get out and rest. The 30 Jews made it out from the hole, a local police placed explosives in the dig and when the Jews were told to return and continue digging the explosives went off to kill them all.”

A witness told Father Patrick that she was 14 year old then. The Germans made her hide the bodies’ pieces in the trees branches around the dig. Trucks kept on arriving till 1,500 Jews were all murdered.

Hearing the shocking witnesses’ stories, of uncovering hidden atrocities, made mayor, Mr. Yaroslav say to Father Patrick, “what you have done to our village you can do for many more villages.”

Father Desbois, who was anointed a Catholic Father 30 years ago, was shocked. Jews were murdered in public and people who buried them or witnessed their killing suppressed the horror deep in their subconscious but now they are willing and want to speak up. He now had his calling. He returned to Paris and met with the Paris Cardinal Aaron Jean-Marie Lustiger, who happened to be a Jew by birth. Cardinal Lustiger was not surprised by Father Patrick’s stories. He knew all about it because his own Polish family was shot in the very same way.

Father Patrick continued to New York City to meet with Israel Singer, then the secretary general of the World Jewish Congress. Mr. Singer told him that his team has been looking for these mass graves since 1944 but could not find them.

Next step, Singer arrived to Paris to meet with Cardinal Lustiger. Together they decided to establish the project Yahad In Unum, its sole task is to find all the mass graves and give the dead memory.

The starting point was the Rava Ruska town area. However, they fast realized that there were mass graves in nearly every village in the Ukraine. There was a need to build a team. Marco was recruited by Cardinal Lustiger. They decided to create a real methodology to find the mass graves of the Jews and the Romani, (also spelled Romany, or Roma), widely known among English-speaking people by the exonym Gypsies.

Today, 25 full time staffers go 15 times a year, 70 days each period, to find graves and interview local elderly folks, who, at the time when they witnessed the horrific events were young, some very young. By now the team has already interviewed 4,000 witnesses and investigated 1,700 extermination sites.

All together it is estimated that more than 2,000,000 Jews were shot and buried in mass graves in the Ukraine, Belarus, Russia, Poland, Romania, Moldavia, Lithuania, Latvia, Estonia and Serbia.

“Why did you take upon yourself such a monumental and mentally difficult task?” I had to ask.

FD: “I do not know. I came from a family that taught me values that made me believe this has to be done. I am convinced that you cannot build a democracy and a modern free and with values world on mass graves. If we do not bury the Jews and the Roma of Europe, what can we say about Darfur, Bosnia, ISIS? More so, many families are now looking for a closure, or for a family member’s record and they look up to us to help them. We have received hundreds of letters asking, ‘where are my mother and father, or grandmother and grandfather?’ I see it my duty to first give a closure to these families so they can go and say Kaddish, the Jewish prayer for the dead, for the first time. We are the only organization in the world to find your family’s fate, no question asked, no fee requested.” 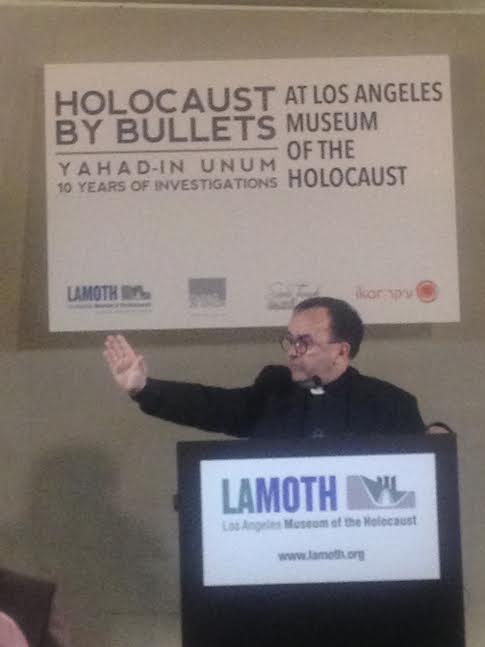 “What is the time frame to conclude your work?” I asked.

FD: “Four years. Four years before all the witnesses pass and the follow-up will become very difficult if not impossible.”

Father Patrick then asked me to give his message to the readers: “The killing of Jews by shooting is the actual model of mass killing, just as ISIS is doing these days. Just as what took place in Darfur. No one will ever think of building another Auschwitz because of the cyber technology and fast media and satellite transmission. All modern genocides are perpetrated by shooting. This thought process Father Patrick included in his book, “The Holocaust by Bullets: A Priest’s Journey to Uncover the Truth Behind the Murder of 1.5 Million Jews.”

FD: “We have to teach Holocaust to the new generations because they have to know what happened in the world so they will fight for values, freedom and morals” Father Desbois makes a profound statement.

Father Patrick recognizes that young people want to learn about the Holocaust and learn to fight it.

And with that Father Patrick Desbois ended our interview. With a heavy heart I left the venue to digest what I just heard.

One important term I understand well now, ‘it is not finished until it is finished’.

You can live for a week without food but you cannot live for one moment without hope. And hope for a better world I want to have. I want the world to rid itself of all its deleterious elements.

I left the interview full of admiration for this righteous, angelic man who took upon himself to fulfill such a difficult task and with one question which I carry with me and have no answer for: why it is not a Jew who is bringing the memory of the unknown dead Jews, rather it is a Catholic Priest?

Father Patrick Desbois and his team’s work have a timeline. In four years there will be no witness to speak with. Our collective effort to help the Yahad In-Unum Foundation to complete its holy work in time is imperative. I am asking you all to join this monumental effort.

For more information and any help one can offer please contact the office of Friends of Yahad In Unum, Robin Massee, Exect. Director, e-mail: americanfriendsyiu@gmail.com

After all if only 6 million Jews donate each year $18.00=Chai, meaning life, in memory of the Jews with no memory, it will amount to $10,800,000, enough to cover Yahad In Unum’s budget and complete the project, before old age takes the witnesses out of the living and the souls of the dead, who have no memory, will continue be restless to haunt us all.