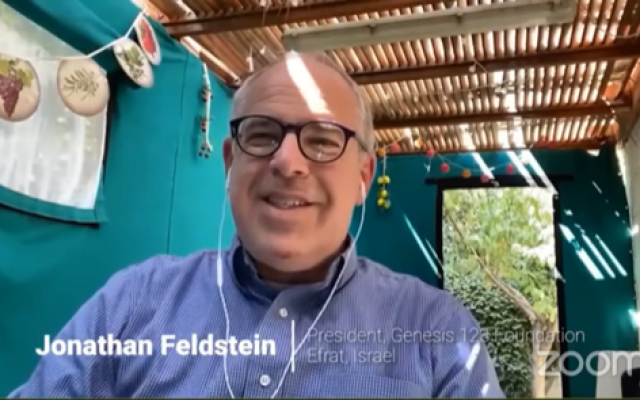 “Miraculous.” “Amazing.” “Divinely inspired.” “The second most significant milestone in our lifetime.”

These are just some of the words used by Jewish leaders describing how they felt by the incredible phenomena of Christians from around the world praying for Israel as part of the Genesis 123 Foundation’s Global Prayer for Israel and Virtual Pilgrimage.  This historic event was the first of its kind, breaking down barriers and building bridges, and providing Christians worldwide the opportunity to be inspired and participate worldwide.  As a Virtual Pilgrimage, participants are invited to send prayers through Genesis123.co that are being printed and placed directly in the Western Wall.

There were far too many meaningful and inspiring prayers for Israel to summarize them all, or highlight each person praying.  Several were noteworthy pillars of the Christian community in Israel including Chris Mitchell, CBN Jerusalem Bureau Chief, Sharon Sanders of Christian friends of Israel, journalists Nathalie Blackham, Paul Calvert, and Emily Jones, also of CBN and a Genesis 123 Foundation Advisory Board member.

The newest member of this distinguished group was Bishop Glenn Plummer, Israel’s first Bishop on behalf of the Church of God in Christ, COGIC. As one of the veterans of this community, Mitchell observed how from the balcony of his apartment he sees children playing in the streets, a literal fulfillment of prophesy.   Bishop Plummer expressed a beautiful teaching he learned from an orthodox Rabbi that how when we pray for the peace of Jerusalem, it is not just praying for peace in Jerusalem, but for the supernatural peace that resides upon Jerusalem for the rest of the world.

Earlier in the day, prayers from China and India went into overtime, exceeding the planned time by nearly an hour.  Chinese and Indian participation were noteworthy, not just as the two most populous nations on earth, but because Christians there, like Israel in the Middle East, exist as small minorities and often are persecuted.  This made their public prayers and affirmation of Israel as central to their faith, all the more meaningful.

While the hour of prayers from Africa were spirited and sincere, among the most unique of these was from Congo, in Swahili. Many noted that even though they didn’t understand the language, the intensity and fervor of the prayer for Israel was understood clearly.

Prayers from Nigeria where Christians have a national network to support Israel. (courtesy)

With participants from Australia to Alaska, people brought prayers from over 30 nations including Argentina, Australia, Brazil, British Virgin Islands, Canada, Chile, China, Colombia, Congo, Cuba, Denmark, Ecuador, Finland, Greece, Hong Kong, Hungary, India, Indonesia, Israel, Japan, Kenya, Korea, Nepal, Nigeria, Pakistan, Philippines, Poland, Sierra Leone, Singapore, South Africa, Spain, Uganda, Venezuela, the UK, and US.  It’s especially noteworthy that some of these countries do not have diplomatic relations with Israel, and even more so that its often unsafe for Christians to worship openly in some of these countries.  Yet that did not stop more than three hours of prayer in China and India, and prayers from Pakistan, Indonesia, Cuba, and Venezuela.  As diverse as the countries, prayers were brought in several languages including Chinese, Hindi, Greek, Polish, Hebrew, Swahili, French, Danish, Japanese, Spanish, Portuguese, English, and some of the native languages of Hawaii and Alaska.

Dr. Bill Winston of the Living Word Christian Center delivered poignant prayers from his office, but is especially noteworthy in that he preaches from a pulpit adorned with the flag of Israel.  Pastor Rafael Cruz lead off more than an hour of prayer in Spanish by sharing why Israel is and should be important to Christians, followed by fervent, inspired prayer in both English and Spanish.

One of the passionate live prayers came from Pastor Mark Biltz who’s El Shaddai Ministry holds services on Saturday, connecting to Shabbat, the Sabbath.  The live prayer broadcast for the Global Prayer for Israel and Virtual Pilgrimage was also part of his own ministry worship service.  He noted how the event is “pivotal” in history, bringing Jews and Christians together. With an emphasis on the Jewish festivals, Pastor Biltz evoked a traditional Jewish prayer in Hebrew and English, “Blessed are You Lord, our God, King of the universe, who has granted us life, sustained us, and enabled us to reach this occasion today.”  Noting the beginning of the Biblical rainy season in the Land, he added prayers to God, the “One who makes the wind blow and the rains descend,” to provide rain where it is so badly needed in areas suffering drought and deadly fires.

At another point joined by Pastor Todd Schumacher in Lake Charles, LA, prayers were made for the withholding of rain for an area that had been hit directly by a hurricane twice in just six weeks.

The event coincided with the Biblical pilgrimage festival of Sukkot (Tabernacles) and celebration of the end and beginning of the annual cycle of reading the Torah, Simchat Torah.  The last hour began with comments from noted Jerusalem Channel broadcaster and Genesis 123 Foundation Advisory Board Member, Christine Darg and ended with live prayers from Alaska with Pastors Niki Tshibaka and Jenn Eason.

Darg, a frequent presence in Israel hosting Christian conferences and unique events around the Biblical festivals, would normally have been in Israel with her “Mobile Feast of Tabernacles.” Because the pandemic has prevented her and virtually all tourists from coming to Israel now, she was especially excited about how the Genesis 123 Foundation went about celebrating and building bridges virtually.

The wide range of Christian prayers was interspersed by unique Jewish commentary and teachings to give Christians a sense of how Jews celebrate the Biblical festivals, and how Jews understand the significance of Christian prayer and support for Israel.  Comments, prayers, and teachings came from a wide range of Jewish leaders such as former Ambassador Michael Oren, radio host Dennis Prager, former Knesset Member Rabbi Yehudah Glick, Eyal Carlin of Israel’s Ministry of Tourism, and several others including many Genesis 123 Foundation board members.

Hundreds of warm and effusive message and prayers were received on social media and more by private messages.  “Laura” expressed the sentiment of many so beautifully. “I believe the Lord had a hand in it all because I’ve always wanted to help the Jewish people. The best way I can think of to do that is to be a friend. So, when I saw this prayer conference, I saw it as a great opportunity to do just that. I want to thank all of you once again. I feel like the Lord allowed me to finally do something for Israel and I got to fulfill a tiny portion of our shared scriptures by blessing Israel.  It was an honor.”

The Genesis 123 Foundation is a non-profit with an international board dedicated to building bridges between Jews and Christians and Christians with Israel.  The full 12 hour program can be viewed at its Facebook page, or YouTube channel.