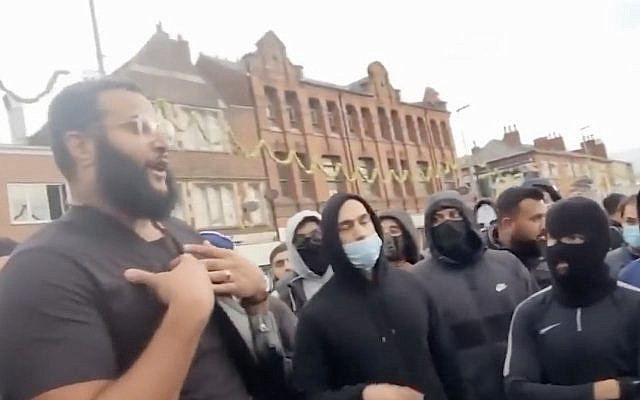 Mohammed Hijab is not a name unknown in the UK, especially in the middle eastern circles which monitor the Israel-Palestinian conflict. In 2021, The Jewish Chronicle reported on the BBC interview of this British Youtuber for the highly controversial BBC documentary on antisemitism in the UK. In May, Hijab had gone with a group of supporters to counter a pro-Israel rally, declaring “We are with the brothers and sisters of Palestine. We will get our vengeance in this life and the afterlife!…..We love death!….Allahu akbar! Takbir!”

An ugly group of haters went to counter the pro-Israel demonstration in London on Sunday. Here's one of the scenes.

"We are with the brothers and sisters of Palestine. We will get our vengeance in this life and the afterlife!"

It seems now that Hijab has started straying from his geography of focus in the Middle East, Palestine, and has been involved in inciting Hindu-Muslim conflicts in Leicester over last weekend at the end of an India-Pakistan cricket match.

In a previous post on the ToI blogs which I had written in April 2021, I had warned of the globalization of Jihad. Jihad, which was now online as well as was bound by synchronized public relations and perception management techniques from the US right up to India. Jihad, where lessons learned by the Hamas in Israel were being used by Islamic extremists in India. It now unfortunately seems that I was right.

Since 75 years, Hindus and Muslims, Indians and Pakistanis have been living and coexisting peacefully in the UK. Both communities have success stories of migrants post partition however there is a historic community of united Indians (migrants prior to the partition in 1947), Hindus and Muslims who have become a fabric of British society. Suddenly, after a cricket match, it all seems to have all changed. British-Egyptian Hijab, who has had little to do with India and Pakistan, seems to be in the center of all the action.

Hijab, who until now was primarily focused on protesting against Israel, spreading anti-zionism and antisemitism, was also seen with a megaphone in Leicester calling Hindus weak, cowardly and inciting groups of muslim youth.

Leicester muslims themselves can be heard asking Hijab to “put the mike down” and “stop inciting” the crowds. Hijab formally has a radically different version. A press release on his website states:

“Given my influence in the community, I had two key objectives visiting Leicester. The first was to ensure that no one from the Muslim community breaks the law or manifests signs of extremist behavior. The second was to remind the community that the law allows the use of reasonable force to defend oneself and vulnerable people. Innocent women were being attacked. My actions and words were recorded and they were said and done in front of the Police. My public work is very clear. I do not condone or advocate for any violence and disharmony between any members or groups of the British public. I will continue to work to ensure the harmony and wellbeing for all, including the Hindu and Muslim communities.”

This directly contradicts the videos that show the Muslim community in Leicester asking him not to escalate the situation.

Hijab often shares the stage and has collaborated with other social media Islamic extremists such as Majid Freedmen and Ali Dawah, who have also added India and Hindus to their focus, which until recently was limited to Palestine and pro-Palestinian, anti-Israel rallies. With over half a million followers on youtube, Hijab has a considerable following in the UK and worldwide.

This incident is the seed of a globalized spread of attack which are slowly creating a unified Islamic front online and offline, uniting Islamic extremist activists who previously were focused on their geographies, to a global cause of Jihad. The important addition to this is now the hindu community which had been largely ignored in the past by Islamic radicals overseas. While protests against Kashmir were limited to activities and rallies against the government of India, this is the first time where violence had been directed against the Hindu community specifically making India and Hindus interchangeable in the propaganda spread by these activists. Activists who are now interfering in South Asian communities on sole qualification of being “Muslim” leaders.

The change in focus of such activists such as Mohammed Hijab who have now created a common front for the global Islamic cause is the symptom of a coordinated islamic fundamentalist campaign which targets anything that they feel does not suit their brand of Islam. It is a precursor for the radicalization of European youth and creates the basis for violence and terrorism of a new breed and generation. Israel and India, Jews and Hindus are all fair game enemies. Europe must take note of this rising tide of homegrown islamic “radicals” and “intellectuals”, as this tide will eventually spread globally creating a tsunami of violence and discord.