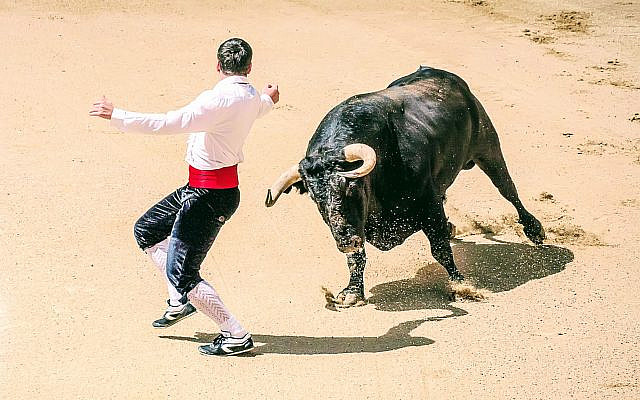 We need decisiveness, determination, not whining…no agreement will stop them. If you want to shoot, shoot, don’t talk.

These days, there is a similar situation with Russia and the U.S.’s threats over Ukraine: too much senseless political bantering and ultimatums that is only ratcheting up tension in the world. The result is that Russia’s ominous military machine including 100,000 troops have surrounded Ukraine (the 2nd largest country in Europe) on three sides and are poised to attack, yet there is a ridiculous song and dance being played out on the world stage that looks something like this:

Russia beefs up their military on the borders with Ukraine. The U.S. seemingly gets all anxious claiming that Russia is getting ready and/or going to attack. In order to deescalate, Russia demands guarantees from the U.S. that they will not admit Ukraine into NATO in the future. The U.S. dismisses it and instead offers negotiations over military exercises and missile placement in Eastern Europe as well as arms control agreements, and threatens “severe consequences” (primarily economic sanctions) and claims unity with Europe, while the EU waffles. Russia ups the ante and the cycle repeats for weeks now.

This is not the way the superpowers typically engage in Russia’s back yard.

For example, when Russia wanted to take Crimea in 2014, there wasn’t all this saber-rattling, instead they just did it flash bang. With little to no warning, Russia and their mercenaries were in taking and annexing Crimea and fomenting separatists in the Donbas region of Eastern Ukraine before the West even knew what hit them. A similar story played out when Russia invaded Georgia in 2008 taking and still occupying territories of South Ossetia and Abkhazia (about 1/5 of Georgia) and it was over in matter of days.

On one hand, Russia and China are coming together (and not just in increased trade and military exercises) to confront the United States, and make the U.S. look impotent even as it continues to be “war-weary” after the long and in many ways unsuccessful wars in Afghanistan and Iraq. In doing so, Russia seeks to reassert their powerful stature and regain strategic lands from the days of the old Soviet Union, the loss of which Putin sees as the “greatest geopolitical catastrophe” of the 20th century. While at the same time, China adamantly wants to reabsorb Taiwan even by force as well as to dominate the South China Sea where a third of the world shipping occurs. While the U.S. had sought to pivot to East Asia to confront the increasingly powerful China, Russia’s dangerous antics in Europe have divided the U.S.’s attention and capabilities. Together, Russia and China strategize that they may be able to both get what they want and avoid a serious military confrontation with the West.

Amidst Russia’s continued military buildup, the U.S. has said openly and repeatedly that they are not going to commit troops to defending Ukraine and have instead simply put a token 8,500 on “heightened alert” to deploy to eastern Europe in the case of hostilities. Rather than any serious military maneuvers or threats of it to ward off Russia, the U.S. talks of economic consequences and sanctions, which didn’t work eight years ago when Russia took Crimea and there is no reason to think it will work now. Further, sanctions haven’t crippled North Korea or Iran, so it is doubtful that it will thwart the bigger and badder Russia. At the very least, if the U.S. wanted to keep Russia off-balance and to think twice what the U.S. will do, it could simply use ambiguity to keep Russia guessing and unsure of themselves. Moreover, instead of ratcheting up the consequences for Russia, the U.S. seems to be watering them down from initially threatening the heavy-hitting disconnect of Russia from the SWIFT international banking system to now just imposing export sanctions on some key technologies and potentially halting the Nord Steam 2 gas pipeline to Germany. Thus, the perceived toothless threats of more sanctions seem to be having the opposite effect of de-escalation and is instead goading Russia to increase their military preparedness for a full-scale invasion of Ukraine.

The disproportionate and likely ineffectual soft reaction by the U.S. to Russia’s hard military threat to Ukraine is escalating tensions rather than ratcheting them down. In effect, the U.S. is saying to Russia: “Go ahead, we dare you!” This makes sense, if the U.S. sees Ukraine as a strategic blunder for Putin that will cause Russia to lose far more than they think they have to gain. The gambit is that if Russia invades, a number of things will happen that will actually weaken Russia in the long-term. While initially Russia’s superior military forces will overwhelm Kyiv, the belief is that in the longer-term, Russia will get bogged down in a costly war of attrition with the Ukrainians on top of the subsequent economic sanctions both of which Russia can ill afford. Moreover, Russia will be seen to be on the “wrong side of history” having invaded a sovereign country and either annexed or occupied it along with much ensuing death and devastation being inflicted. Therefore, instead of weakening NATO as Russia would like to see happen, this in effect will strengthen NATO convincing its members that the Russian threat is still very much persistent and will result in it making an even greater investment in their armed forces to counter Russia in the future.

In the end, the question is whose strategy will prove to be the winning one: Russia’s daunting finger on the trigger or even an actual devastating invasion of resource-rich Ukraine to try and safeguard their flank on Eastern Europe or the U.S. gambling that Russia will get mired in a no-win Afghan-like military foray that will bankrupt them financially and morally. As we await the answer to this, the world is learning to disregard and disrespect those that talk bull and goad the bull rather than decisively confronting the threat. We can’t afford the consequences to world peace and stability.