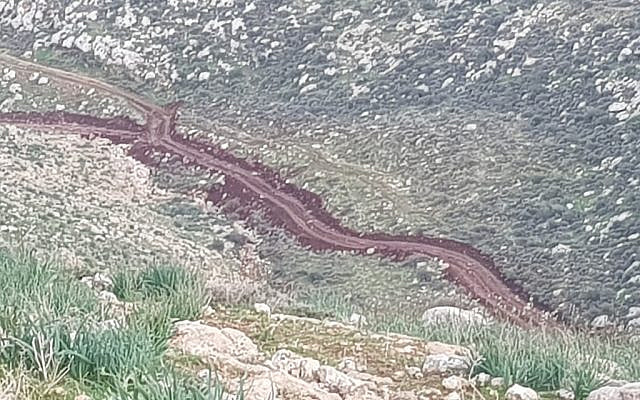 This week I was accosted by settler youth and faced other dangers, trying to bring Israeli security forces to where settlers were building a road through a army live fire zone in the middle of the night.  Details below. Another dirt road isn’t such a big deal.  The real story was that the purpose for building the road was to further their plans to take over the land and drive out the Bedouin shepherds who had coexisted with the army for decades.  When I told the story on Facebook, one representative comment was a hashtag to “hakol shelanu,”(It is all ours.).  I answered, “Everything belongs to God.  It is interesting how almost every religion believes that God loves them more than anybody else.  There are a lot of believers out there who think that God gave the Jewish people a blank check.  We are the chosen people, God gave us the land, it is all ours, and it would be sinful not to “redeem” it by almost any means possible.   That isn’t what the Torah says, or what most of our sages taught.

In this week’s Torah portion we are told “If you will obey Me faithfully and keep My Covenant, you shall be My treasured possession among all the peoples. Indeed, all the earth is Mine, but you shall be to Me a kingdom of priests and a holy nation” (Exodus 19:5-6)  IF  We can debate what obeying God and keeping God’s Covenant with us entails, but clearly God is not giving us a blank check.  Unlike the belief in some Christian thought that the Jewish covenant with God has been abrogated, the Torah and prophets make it clear that there is no permanent break (Isaiah 50:1, Jeremiah  3:12, Hosea 3:5, etc) However, the Land is not guaranteed to us in perpetuity, but on condition.

Separate from the question of sovereignty, most Talmudic sages recognized the property rights of non-Jews in the Land of Israel.  We cannot wave the Bible to cancel property rights.  Furthermore, in our dialogue with God, we can request that God give us the opportunity to honor God’s Image by allowing us to dwell together in peace and mutual respect.

This brings me back to the last of the 10 commandments we read this week, “You shall not covet the house of re’ekha (usually translated “your neighbor” but better translated as the one who is essentially like you- i.e. every human being) : you shall not cover your re’ekha’s wife, or his/her male or female slave, or his/her ox or his/her ass, or anything that is your re’ekha’s (Exosus 20:15)  “It is all ours” is one of the ways we give ourselves permission to covet. Those who take more and more of our country’s wealth and resources at the expense of those living in poverty do this in a way.  However, we see this most clearly as a justification for dispossessing non-Jews in the Land of Israel.

This brings me to the events of this week.  There were many, but I will focus on one.

On Tuesday I received a call from the Bedouin of Eyn Rashash. They reported that the previous night, settlers (presumably settlers from the Malakhei HaShalom outpost adjacent to the Mavo Shilo army base, just east of the Alon road.) had worked from 7:00 pm to 5:00 am to create a new road running through the lands they covet, even though it is an army live fire practice zone.   As mentioned above, the Bedouin tell us they had lived in harmony with the army for decades.  Unless there was to be a military exercise, they were allowed to graze their flocks freely. This changed when the Malakhei HaShalom outpost was set up. In recent months the verbal harassment and intimidation gave way to physical violence, and chasing Bedouin flocks away by running horses around and through them, while playing loud music.

I arrived in the afternoon, and stayed in order to see if the work would resume that evening.  Around 7:30 we heard the rumble of the heavy earth moving equipment and saw the lights from afar. The huge tractors came from the direction of the settlement and army base. In other words, there is no way that the soldiers in the base didn’t know that unauthorized earth moving vehicles were moving into an army zone at the night.   My first call to the army situation room was at 7:41 pm. I asked if there was any authorized work going on.  They said they would send soldiers, and I sent them coordinates and a map.  My second call was at 8:00 PM. In the situation room they maintained that they needed more help with the location. Although my explanations were very clear, and the army knows the area well, I offered to go to where the vehicles were in order to send additional GPS data, to meet the army next to their base and take them there, or do whatever else was helpful. At 8:27, understanding that nobody was on their way, I told them that I would take the risk of getting to where the work was taking place.  I cautiously made my way through the dark.  At 8:47, when I was already deep in the territory, a police officer called, saying that he would ensure that the army would arrive, and asking that I not take risks. It was a bit late for that.  I sent him and the army my coordinates, finally arriving where the work was taking place.  I laid flat on the ground to film the work without being detected.

At 9:52, I was back at the Bedouin encampment. The army had done nothing.  I arranged to meet the army on the access road to their base.  The army didn’t show up, but four of the at risk youth who reside at the outpost did. I called the police and army for help, as they surrounded and blocked my car. When one of them covered his face, I began to worry, recalling recent incidents in which these same youth had acted violently.  Although I was only several hundred meters from the army base, nobody showed up.  After I managed to break free, I flagged down a passing army jeep.  The soldiers said they would follow me to where the settlers were building the road, but then drove away.

At 10:47, I was told that the army hadn’t been able to find me (hard to believe), and that the topography was too difficult for the army. I offered to make things even easier by going to the gate of the base.  I was told that the base would be notified.  At 10:54, the army said the police would meet me, and go with me.  At 10:56 the police said that nobody had spoken to them, and that the work was the army’s responsibility.  The police officer said that she would speak with the command center. I requested that somebody get back to me, after the army and police resolved their ping pong, and notify me who was taking responsibility. At 11:25, I told the command center was still waiting, and asked for an honest answer if, after almost four hours, whether anybody had anybody had any real intent to come.  Again the soldiers in a jeep said they would accompany me, followed me a short distance, and then drove off.  I returned to the gate of the base.  A more senior officer told me at 11:35 that I had to submit a telephone complaint.  I told her that the army didn’t need a complaint from me to the police to deal with work be done in their live fire zone.  Furthermore, I had already spoken to the police (the police officer I spoke with apparently didn’t talk to the command center, as she said she would.  The command center officer said she would talk with the police.

At 12:11 I had a long conversation with the command center officer, who told me it was too dangerous for the army to go to where the work was taking place, and it would have to wait until the morning. She would sendAs we were speaking, two of the youth found me again, and again blocked my car.  The guard at the gate said he couldn’t help me unless they attacked me physically.  The officer on the line said she would send somebody out, but didn’t. She handed me over to a even more senior officer who wouldn’t even tell me whether there was any authorized work going on that night.

At 9:28 am, a Civil Administration officer called and said that he was on his way, but the Bedouin called to complain that the army showed up in their encampment, not where the work was taking place.  Finally, around noon, the Civil Administaration stopped and confiscated one of the returning work vehicles, as two others escaped to the Jordan valley. By that time, the new road extended many kilometers.  Starting in the wadi that the settlers of Malakhei HaShalom wanted to impose as the border between their flock and Bedouin flocks, as they divided up the live fire zone.  It then cut into the territory that they had previously been willing to leave for the Bedouin even approaching water Bedouin water sources.

The point of this story is that those who use the cover of “It is all ours” to justify stealing what they covet by force and by trickery had at least the tacit cooperation of the Benyamin army brigade.  The road is an almost completed fact. Its route gives away its purpose.

The Civil Admnistration officer said “Leave it to us now.  We are taking care of it.”  I replied that I hope that “taking care of it” meant making sure that the Bedouin could return to the areas that the settlers have been using increasingly aggressive methods to keep them out of.

Some of my colleagues argue with me that it was simply foolish self-delusion to even imagine that the army would do anything other than allow the settlers to do as they wish. Even if they are correct, as they seem to have been in this case, I refuse not to demand that others act justly. I respect people enough to hold them to higher standards.  Believing in the possibility and responsibility of helping others to find the goodness and decency within them, I will continue to work and pray for the day when we live up to our obligations established in our Covenant with God made at Mt. Sinai.  May our understanding that all the earth is God’s, lead us to cease to covet and steal what is not ours, and find true fulfillment in maximizing the wellbeing of all humanity.