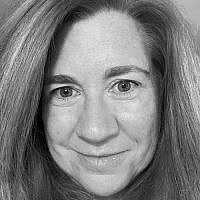 The Blogs
Shana Rosenblatt Mauer
Apply for a Blog
Please note that the posts on The Blogs are contributed by third parties. The opinions, facts and any media content in them are presented solely by the authors, and neither The Times of Israel nor its partners assume any responsibility for them. Please contact us in case of abuse. In case of abuse,
Report this post.

As the government wrestles with how to loosen the Corona-related lockdown, no matter what the policy change, God will not go bankrupt, lose his home, succumb to depression, fall behind in geometry, or become a couch potato.

There is little agreement about the overall danger of the disease, contagion data, the most likely infection sources, incubation periods and so forth. What is clear is that somehow we are going to have to re-activate all the facets of our world. But, where do we begin? Who is suffering most? What lockdown damage is going to be hardest to reverse?

Every sector in Israeli society bemoans its situation, insisting that it should be a top priority in the process of relaxing the national closure. Accordingly, members of Knesset plead for their own constituents. Adding to this chorus are religious (almost all ultra-Orthodox) leaders – in and out of government – who have demanded that synagogues should be open, religious ceremonies should be held with guests, yeshiva studies should continue uninterrupted. However, as we enter a renewed effort to normalize our lives, it is imperative that we all exercise flexibility, compassion, and, importantly, common sense.

Religious leaders who call for a relaxation of restrictions on religious life rarely state what, some have argue, underlies their appeals. Their true worry may be that without the rhythm of religious life – days, weeks and months punctuated by brits, engagements, weddings, rebbes’ tischs, massive funerals, shivas – the religious community may lose its momentum. Individuals may even find themselves adrift. The tight hold that the ultra-Orthodox leadership enjoys, presumably, may recede. Their concerns are real. This structure has given Jews strength and solace throughout history. Moreover, the ultra-Orthodox do face assaults on their way of life, and are perennially at odds with large swathes Israeli society.

However, this is not the case that has been made on the Knesset floor. Instead, when the opening of malls and yoga studios has been proposed, there have been retaliatory demands for synagogues and yeshivas to return to business-as-usual, as if business owners and God are in competition.

While certain MK’s rage that shuls should be opened because restaurants might, at any moment, resume business, the comparison is erroneous. The proprietors need the restaurants’ customers, the resultant revenue being imperative for them to turn a profit and support themselves and their families. Does God need worshippers to be inside beitei Knesset? Are prayers from a parking lot quorum no less precious than those issued from Jerusalem’s Great Synagogue. The religious leadership also mocks proposals to open gyms and swimming pools, responding that such frivolity is unconscionable when weddings are limited to dozens of guests and men cannot visit mikvahs. But, again, the analogy is flawed. Exercise facilities are not, as some imagine, mainly vehicles for the vain to sculpt their physiques. For the most part, they are important tools in the quest to maintain health. Data has shown that weight gain and attendant health issues have been precipitously on the rise during the pandemic. In contrast, limitations on weddings, presumably, have no deleterious impact on the long-term happiness of the couple. Similarly, Jewish men have sustained their spirituality throughout epochs somewhat more trying than a few mikvah-free months.

The Corona restrictions have not forbidden religious practice, they have only reconfigured it. If certain segments of the religious community feel that this reconfiguration is threatening, even devastating, that is a situation that possibly needs addressing. But, to pretend that these restrictions are an assault on personal spirituality and God’s relationship with individuals is disingenuous. Israel is not the Soviet Union. Israelis are free to engage in their daily supplications unhindered. True, they have to do this outside and the size of minyanim is limited. But, for the meantime, the weather is still cooperative and experience has shown that parks, impromptu sidewalk gazebos, large courtyards and various outdoor enclaves can all serve as interim shuls. Likewise, Israel’s Corona-related directives for religious life are hardly the stuff of Spanish Inquisition edicts and it is not only specious, but unforgivable, to behave as if they are.

The whole equation that demands reciprocity for one sector of society every time another sector benefits from relaxed restrictions is childish and counterproductive. This game of sectorial one-upmanship amidst the resumption of life in the shadow of Corona is endlessly galling. At the very least, there should not be a pretense that limitations on the frameworks of religious life must be repealed for “the sake of Heaven.” God will not be forfeiting on a mortgage any time soon, and the religious dedication of those who are genuinely devoted will not crumble because of parking lot services and outdoor “daf yomi.”

About the Author
Dr. Shana Rosenblatt Mauer is an instructor in the English Department at Herzog College (Alon Shvut) and teaches topics in contemporary Jewish literature at Machon Schechter (in Jerusalem).
Related Topics
Related Posts
Comments