They say that Armageddon, that war to end all wars would take place in Megiddo, not far from my old Kibbutz Barkai, and the Wadi Ara area, which Prime Minister Netanyahu reportedly has offered to transfer (without consulting the local Arab residents) to a future Palestinian state in exchange for settlements in the West Bank.

However, a more likely location is the Temple Mount/Haram al-Sharif, which has been the focus of so many tensions recently. The clash between Jewish right-wing fundamentalists who want to build a 3rd Temple on the location with Muslim extremists concerned with safeguarding the honor of the 3rd holiest site in the Islam world after Mecca and Medina, could be the ultimate spark.

Handle with care is an understatement.when talking about the area which contains the Al Aqsa Mosque (from which the Prophet Muhammed ascended to the heavens), the Western Wall (of the Second Temple), with the nearby Church of the Holy Sepulchre thrown in for good measure.

The Dome of the Rock & the Western Wall

When Naomi Shemer wrote “Jerusalem the Golden” in 1967 at the request of Mayor Teddy Kollek, she was undoubtedly thinking of the beautiful Golden Dome glistening on top of the Dome of the Rock mosque. I first saw that Golden Dome in July, 1967, after the war, a mesmerizing site. At the time, I just saw a beautiful work of art, without realizing all the implications.

It reminded me of the other Golden Dome I had seen when I arrived in Israel for the first time, to the port of Haifa by ship – the Golden Dome of the Bahai Temple on Mt. Carmel. Also a mesmerizing site. However, that dome, which overlooks the Haifa harbor from Mt. Carmel and the exquisite Bahai Gardens, will not cause World War III (although the Shiites don’t like the Bahai’s, who claim they are an extension of Islam, the next step). The Golden Dome of the Bahai Temple

Back in June 1967, one of the wisest things that then Defense Minister Moshe Dayan did was to order that the Israeli flag be removed from the area, and to leave the Jerusalem Islamic Waqf in charge of the religious sites on the Temple Mount-Haram al-Sharif area. Dayan said that Israel didn’t need “another Vatican”.

After the war, a few Jewish extremists dreamed of rebuilding a 3rd Temple on the site.  They were assumed by the vast majority of the Israeli public and leadership to be suffering an acute case of Jerusalem Syndrome. One of them was Gershon Solomon, who founded a group called The Temple Mount Faithful movement.  Hebrew University Prof. Emerita Moshe Maoz, one of Israel’s foremost experts on Islam, says that Solomon was one of his students, and he definitely considers him to have been a “major educational failure” on his part.

In 1984, a group of national religious Jews that grew out of the Gush Emunim/Bloc of the Faithful settler movement actually planned to blow up the mosques on the Temple Mount/Haram Al-Sharif, to prepare the ground for the building of the 3rd Temple.  Fortunately they were discovered and caught by the General Security Services, before they could carry out their “mission from God”.

Today, people with such views have even infiltrated into the mainstream of the Israeli leadership, with Minister Uri Ariel of the Jewish Home Party calling for a rebuilding of the 3rd Temple.

As for the whole idea of rebuilding a 3rd Temple, I agree with Gershon Baskin who wrote recently that “building the third Temple would be the destruction of modern Jewry and would, I believe, lead directly to the end of the modern State of Israel.” .

The recent crisis around the Temple Mount/Haram Al-Sharif should be a warning to all of us, that a reasonable long-term solution must be found to neutralize the dangers inherent in the conflicting visions of the Jewish and Muslim extremists.

The solution lies in the wisdom of those back in 1947 who formulated UN Resolution 181, the Partition Plan, who called for the establishment of a Jewish and an Arab state in Mandatory Palestine, with Jerusalem to be an international city.  While it’s clear that, unfortunately in 2017,  the overwhelming majority of the Israelis and Palestinians will not accept the idea of a total internationalization of West and East Jerusalem, an internationalization of the Old City, and particularly the Temple Mount/Haram al-Sharif area is not only possible, it’s doable.  There are many formulas available for how to do it.  What is needed is wise civil society and political leadership, on all sides, to get it done. 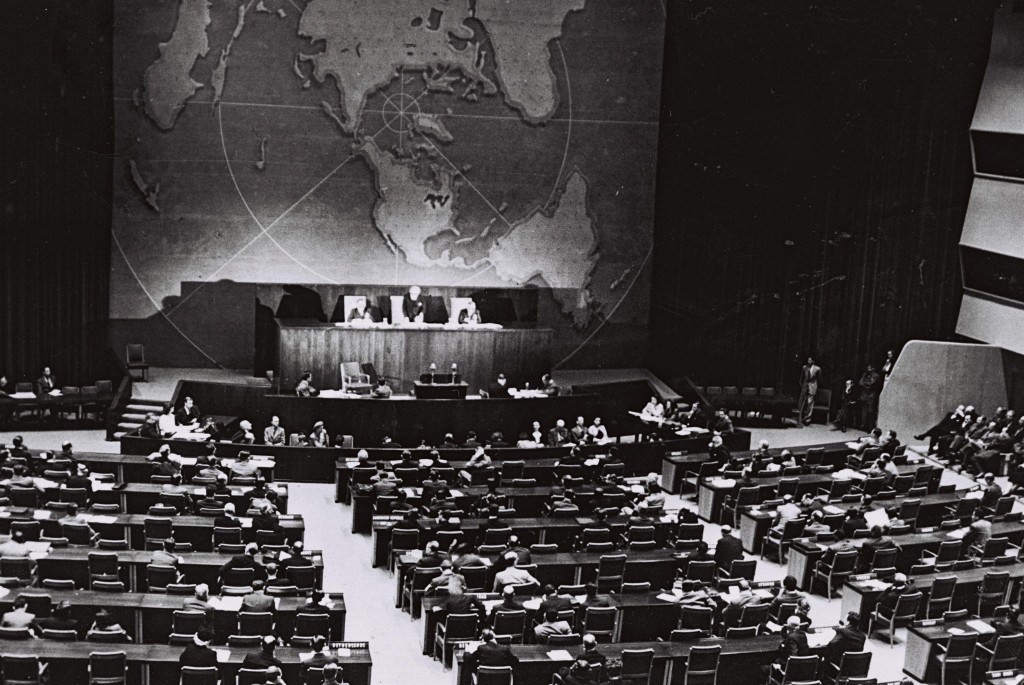 The UN General Assembly voting in 1947 for the Partition Plan
About the Author
Hillel Schenker is Co-Editor of the Palestine-Israel Journal, and lives in Tel Aviv
Related Topics
Related Posts
Comments