Something there is that doesn’t love a wall,

That sends the frozen-ground-swell under it,
And spills the upper boulders in the sun;
And makes gaps even two can pass abreast…
I let my neighbor know beyond the hill;
And on a day we meet to walk the line
And set the wall between us once again.
We keep the wall between us as we go.
To each the boulders that have fallen to each…
There where it is we do not need the wall:
He is all pine and I am apple orchard.
My apple trees will never get across
And eat the cones under his pines, I tell him.
He only says, ‘Good fences make good neighbors.’
Spring is the mischief in me, and I wonder
If I could put a notion in his head:
‘Why do they make good neighbors?…
Before I built a wall I’d ask to know
What I was walling in or walling out,
And to whom I was like to give offense.
Something there is that doesn’t love a wall…
He says again, ‘Good fences make good neighbors.’

I share Frost’s frustration with his neighbor just over that fence.  There does seem to be something in Nature itself that abhors walls; they keep people and their properties unnaturally walled off from each other.  Why must his neighbor insist that good fences make good neighbors?  Wouldn’t one open land shared by all without artificial boundaries help us be better neighbors? If God’s own handiwork resists the walls that we erect between each other, why shouldn’t we resist them as well?  At the same time, I think I understand the neighbor’s point of view.  There are occasions when separation is a better choice than sharing, but how and when do we decide that this is the case?

I read this poem and I wonder:  who is right?  Frost or his neighbor on the other side of that fence?  Yet this way of thinking is a bit too rigid, too much of a zero-sum approach to human affairs. A better way to pose this question is, when is one or the other right?

Jewish tradition has done a little bit of thinking about this question, so let’s imagine that Robert Frost is joining us to study a passage from the Mishnah, Jewish oral law, to see what it has to say.  Tractate Bava Batra deals with different aspects of Jewish property law.  In the first chapter of that Mishnah tractate, the conversation is almost exclusively about people who jointly own property and the circumstances under which they may or may not create walls between them.  In ancient times, people lived in homes surrounding courtyards, such as the ones in the image below: 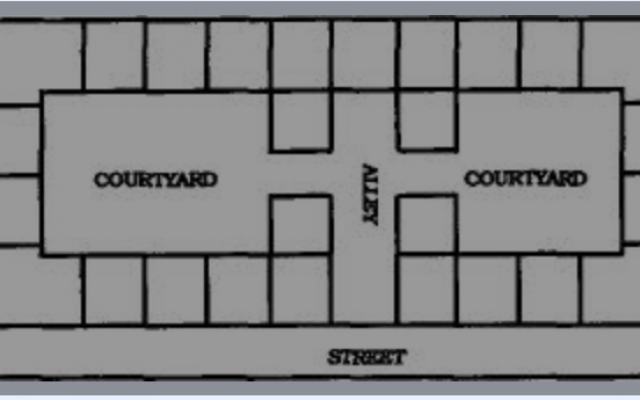 Note that the courtyard was common property; everyone on each cul-de-sac owned it and shared it.  What if one or more or the owners wanted to erect a fence or a wall to avoid what Jewish law calls heizeq re-iah, personal damage caused by a lack of privacy?  If the co-owners owned at least four square amot of front property, roughly 36 square feet, one of them could force one or more neighbors help to erect a common wall between them, to protect his or her privacy.  If each owned less than this amount in the courtyard, those good neighbors could make good fences between them, but no one could force anyone else to do so, since dividing tiny parcels of land would impose a hardship on the owner; similar rules applied in dividing gardening property, if such was the local custom. Interestingly – and Frost would be happy with this – neighbors of adjoining properties in an open field could never force each other to erect a wall dividing their properties. If my neighbor chose to do so, he would do so at his own expense and inconvenience. Theoretically, Frost’s apple trees and his neighbor’s pine trees could freely mix.

Frost’s opinion is that nature itself hates separation between property and people.  This implies that we should tear down all those walls and be part of one great universal neighborhood.  The problem is that people don’t live in nature, we live in relationships, families, cultures, and distinct groups that require boundaries to keep them healthy.

His neighbor’s opinion is that you can’t have good neighbors -that is, good societal relations – without constant separation between people, the proverbial good fences.  The problem with this opinion is that one person’s good neighborly fence can be another person’s prison.  As an example, Americans are still learning the hard way that “separate but equal” is never equal, when the ones doing the separating are at the top of the caste system walling off others whom they don’t really deem equal by virtue of race, class, or ethnicity.

The Mishnah cuts a middle path between these extremes of unyielding individualism and collectivism, of rigid particularism and universalism. By implication, it asks all of us local, national and global neighbors to consider three things before erecting or tearing down our fences and walls:

As we end our study, we should recognize one other thing that the Mishnah and  Frost’s poem teach us. Deciding which fences are good and which nature abhors requires dialogue, not platitudes. It is too easy to fall back on comfortable dogmas like “something there is that doesn’t love a wall” or “good fences make good neighbors.”  Configuring the alternating contours of openness and boundaries in a society demands of us the hard work of talking and arguing, agreeing and agreeing to disagree.  Grown-ups in civil society need to look over their walls at each other and interact respectfully as fully engaged equals.

As we enter this new secular year, are we up to that task?

About the Author
Dan Ornstein is rabbi at Congregation Ohav Shalom and a writer living in Albany, NY. He is the author of Cain v. Abel: A Jewish Courtroom Drama (Jewish Publication Society, 2020.)
Comments