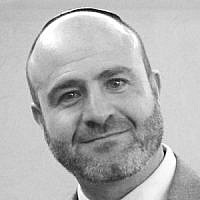 The Blogs
Benjamin Laniado
Apply for a Blog
Please note that the posts on The Blogs are contributed by third parties. The opinions, facts and any media content in them are presented solely by the authors, and neither The Times of Israel nor its partners assume any responsibility for them. Please contact us in case of abuse. In case of abuse,
Report this post.

These recent months we have witnessed an unprecedented event: the first great pandemic of this new century. Our ancestors have lived, and survived, these types of phenomena, but the daily news can be overwhelming and even depressing.

At CADENA we believe in the adaptability of homo sapiens: we have seen cases of dense cities such as Hong Kong or countries like Taiwan that, despite being so close to the epicenter, have avoided the negative consequences of the infection thanks to their experience prior with SARS, in 2002. This is good news. We can and must learn from previous experiences.

When dealing with this crisis, the historian Yuval Noah Harari has mentioned, the world has two options: either we return to nationalism and closed borders or we strengthening our international solidarity.

As an international humanitarian agency, we believe there is only one choice: human solidarity, beyond linguistic, cultural, ethnic, or religious borders.

In this sense, we regret the withdrawal of funds from global organizations. We think it is essential to maintain the international alliances that resulted from the catastrophic experience of the Second World War. This type of alliances prevents medical protection material from becoming a scarce product sold to the highest bidder when it should be managed strategically with a view to public health.

Following this spirit of solidarity, we welcome the pronouncement by Ursula von der Leyen, President of the European Union, recognizing that Italy had to face the crisis alone. We believe that this is an example of international solidarity that sets the tone for how we should conceive of the disease: as a global phenomenon.

But beyond national expressions of solidarity, we believe, as Harari himself points out, that what distinguishes our species is the ability to communicate and to establish ties beyond the family group. Cooperation is an instinct for survival: those who have overcome the evolutionary and historical challenges have been those who have known how to cooperate.

Today is the time to strengthen those ties. We all belong to a community, whether it is faith-based, a sports team, hobby focused or our own coworkers. I encourage you to contact these acquaintances, ask them if they need help. It is only by creating mutual aid ecosystems that we can build resilience.

Anyway, here are some good news that will give us hope in these uncertain times:

–New Zealand may return to normal operations: the country has shown that it is possible not only to flatten the contagion curve but also to eliminate it completely, thanks to a series of strict measures to prevent the spread.

–The first tests of a vaccine are being carried out in the United States, Israel, and other countries. In fact, a tuberculosis vaccine developed a century ago, could help boost the immune system.

—The quarantine has ended in Wuhan, the epicenter of the pandemic: despite everything the city went through it is now gradually returning to normal.

Much remains to be done, the director of the World Health Organization, Tedros Adhanom Ghebreyesus, mentioned a few days ago that the worst of the pandemic is yet to come.

We know that in Africa, Asia, and Latin America the vast majority live in conditions that made them vulnerable in light of this reality.  in CADENA we will continue working tirelessly to reach out to them and work jointly on a promising future for humanity.

Let us open the doors of cooperation and mutualism, this is the only way will we face this enormous challenge.

About the Author
Benjamin is the Secretary-General of CADENA: a global Jewish humanitarian relief agency based in Mexico City. He's the winner of the 2020 "Changing the World" Award, awarded by President of Israel, Reuven Rivlin.
Comments