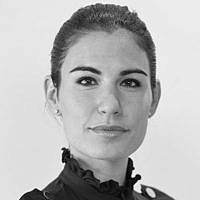 The Blogs
Ariella Dreyfuss
Apply for a Blog
Advertisement
Please note that the posts on The Blogs are contributed by third parties. The opinions, facts and any media content in them are presented solely by the authors, and neither The Times of Israel nor its partners assume any responsibility for them. Please contact us in case of abuse. In case of abuse,
Report this post.

It has certainly been an interesting year, but 2020 was more than just the year of COVID-19. Here is my traditional rundown of 10 highlights (and lowlights) in the Israeli high-tech scene in the last 12 months.

However, more interestingly, the Israeli capital market, which up until 2020 was dominated by real estate and finance, finally developed a taste for technology. The Tel Aviv Stock Exchange (TASE) had a record number of 19 new high-tech company listings (including five R&D partnerships), including the first-ever TASE food-tech IPO by plant-based meat maker SavorEat and the IPOs of Ecoppia, GenCell and Aquarius Engines.

For once the customer was pivoting as well, with the pandemic forcing certain business to quickly adopt technologies previously considered a “nice to have” or that were being leisurely piloted, into a necessity, including predominantly digital health tools and tools to address the new work-from-home model.

About the Author
Originally from England, Ariella has lived in Israel since 2005. She is a partner in the M&A department at Barnea Jaffa Lande & Co and advises international and Israeli entrepreneurs and companies engaged in a wide range of high tech activities.
Related Topics
Related Posts
Comments