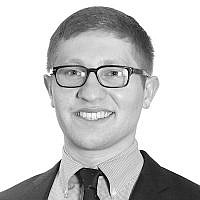 The Blogs
Robert Miller
Apply for a Blog
Advertisement
Please note that the posts on The Blogs are contributed by third parties. The opinions, facts and any media content in them are presented solely by the authors, and neither The Times of Israel nor its partners assume any responsibility for them. Please contact us in case of abuse. In case of abuse,
Report this post.

Given the amount of ink spilled on the matter in the Jewish press, you’d think that the Jersey City shooting had galvanized the community to combat the specter of anti-Semitism once again rearing its ugly head in public life. Sadly, the only resistance this slow-motion pogrom has faced is indifference and cheap verbiage.

One week ago, on December 10, a police officer and three civilians were murdered by two fringe members of the Black Hebrew Israelites in a shooting incident at a kosher grocery store in Jersey City, N.J. Three days after this horrific tragedy, I had the privilege of attending the Bronfman Center for Jewish Student Life at NYU’s delegation, organized by OU-JLIC Rabbi Joe Wolfson, to visit the bereaving survivors and family members of the victims of the massacre.

The most telling aspect of our trip was the lack of attention it was receiving. We arrived at the site four days after the tragedy only to find that we were the first to lay down flowers. Out of all the millions of Jews who live in the tri-state area, we were the only ones from outside the Haredi world who had set aside a few hours to pay our respects. Seeing this made me reflect on why this might be. Was it because this attack had happened so close to home that people just assumed others would be stepping up, or was it because the victims of the tragedy we are so distant, not in a physical sense, but had such a different lifestyle than the majority of the Jewish community. Regardless, despite all the hashtag activism, empty words, and articles in the Jewish Week and The Forward, we were the first that had bothered to show up. This, to me, was the ultimate tragedy. At a time when it seems as if the Western world is beginning to turn on its Jewish population again, diaspora Jewry has gone complacent. We are more concerned about debating the semantic nuances of being a religion versus a nationality to remember that we are all a part of עם ישראל.

After our visit to the site of the carnage, we met with Rabbi of a Shtiebel, who explained to us that the Jewish people, despite all our differences, are connected, like layers of an onion. This message, to me, was the most profound of the day. Throughout history, while many have attempted to eschew their Jewish identity or dispense with other Jews who practice differently than them, we are all the same in the eyes of our enemies, and we are the same at our core.

Mark Twain once asked: “All things are mortal but the Jew; all other forces pass, but he remains. What is the secret of his immortality?” One of the answers to that enigmatic question is the strength of the Jewish people’s connection to one another. The worst episodes to befall our people in history occurred when we forgot this timeless truth. The greatest קידוש ה׳ we could make on behalf of the victims of this horrific atrocity would be to put aside the forces that pull us farther apart and unite under the banner of collective responsibility for our fellow Jews. Only then can we begin to come to peace with what has occurred.

About the Author
Robert “Bobby” Miller, 22, is a senior at New York University from Englewood, New Jersey. He has long had a passion for international affairs and history and is an unequivocal Zionist.
Comments