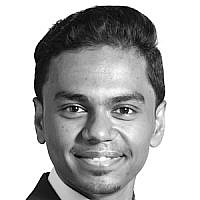 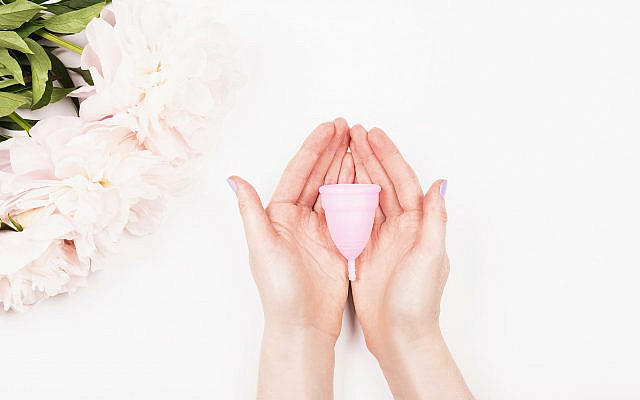 When we talk about periods, accessibility has always been prioritized over sustainability. However, one does not have to undermine another.

An average woman is likely to menstruate about 450 times throughout her lifetime. This implies that she will need to use some kind of menstrual product for about 450 weeks. The most accessible products are disposable ones, such as tampons and sanitary pads, which are easily found on the shelves of stores and pharmacies. The U.S. FDA recommends changing a tampon every four to eight hours a day. Assuming that each period lasts for about 5 days, this means a woman will use more than 9,000-11,000 tampons over her lifetime. Using current average market prices, this would mean an expense of $2,000-$2,500 or nearly  NIS 7-9,000 for something as natural as menstruation. In 2018, close to 18 billion pieces of tampons were sold worldwide, about a third of which were consumed by American women alone, with over 45 billion products sold overall annually. In addition to posing a financial risk for economically weaker section of the society, these sanitary products pose a grave environmental problem as almost all forms of disposable menstrual products are composed of between 10-90% of plastics or microplastics in the form of wings (for pads) and the applicators (for tampons). These used sanitary products find their way to the landfills and some eventually to the oceans. The plastics derived from pads or tampons are estimated to take between 500-600 years to decompose, so not using even a single pad can make a lot of difference.

A growing interest in reusable products

But menstruation does not have to be taxing on the environment. Recently, there is a growing interest in using sustainable menstrual products. The good-old cloth pad is making a comeback with an improved design while many others have chosen to embrace menstrual cups. Specifically, menstrual cups are inexpensive and sustainable to manage menstruation while also being convenient and safe. Medical-grade silicones used in these pads offer the least chances of contracting vaginal infections or itching compared to other available products. Most of these cups have a lifetime of about 10 years, implying that only a few cups can replace the number of tampons and pads used over the same period of time leading to considerable cost savings. That said, a clear lack of awareness of using these reusable products among Israeli women was apparent. This possibly stemmed from a number of reasons, such as lack of easy availability, lack of credible information, and as a result, hesitation, and finally, the general taboo regarding talking freely about menstruation. Moreover, a recent Tel Aviv University study has found an alarming amount of microplastics in marine animals along Israel’s coastline, some of which may be attributed to the flushing of sanitary products.

An attempt to spread the noise

The Davos Agenda 2021 of the World Economic Forum, with a special emphasis on sustainability, has called on the CEOs of major global corporations to commit to reducing emissions through being part of an existing alliance of 83 CEO’s of the largest companies of the world committed to transition to a low-carbon economy. Riding on this steadily gaining momentum against the rampant use of plastic products, the Tel Aviv Hub of World Economic Forum Global Shapers Community recently launched a campaign to raise awareness about the use of reusable menstrual products, highlighting their social, environmental, and medical aspects.  Realizing that there were many unanswered questions, the hub recently hosted a workshop with the idea of introducing the idea of sustainable menstruation to answer as many questions as possible. Smadar Regev Agmon, who passionately runs Nashuiti, shared that unlike popular opinion, menstrual cups were invented in 1937, even before tampons came to the limelight. However, it did not hit the market until the ’80s, and only now it is being considered as a viable option. Although readily available, she advised against buying menstrual products from general marketplaces, such as eBay, where the medical specifications are often overlooked.  In addition to menstrual cups, other reusable products include fabric tampons and pads, which can be cleaned and washed with other laundries. There is also growing popularity of menstrual underwear which are elegant, pretty, and more comfortable. As it may not be possible to change them during the day, menstrual underwears are perfect for less heavy days. Furthermore, Dr. Pinchas Aharoni, a practicing gynecologist at the Clalit Health Services shed light on the medical queries of using menstrual cups and pads. Discussing a recently published report on comparing menstrual cups with other products, Dr. Aharoni shared that cups are as effective in controlling leaks as other commonly used products, did not elicit vaginal infections, and were relatively easy to use while Toxic Shock Syndrome (TSS) was detected in only very rare cases. Although for some women, it might take some time and effort to get used to them, the learning curve is relatively quick and is not likely to last more than a couple of months. 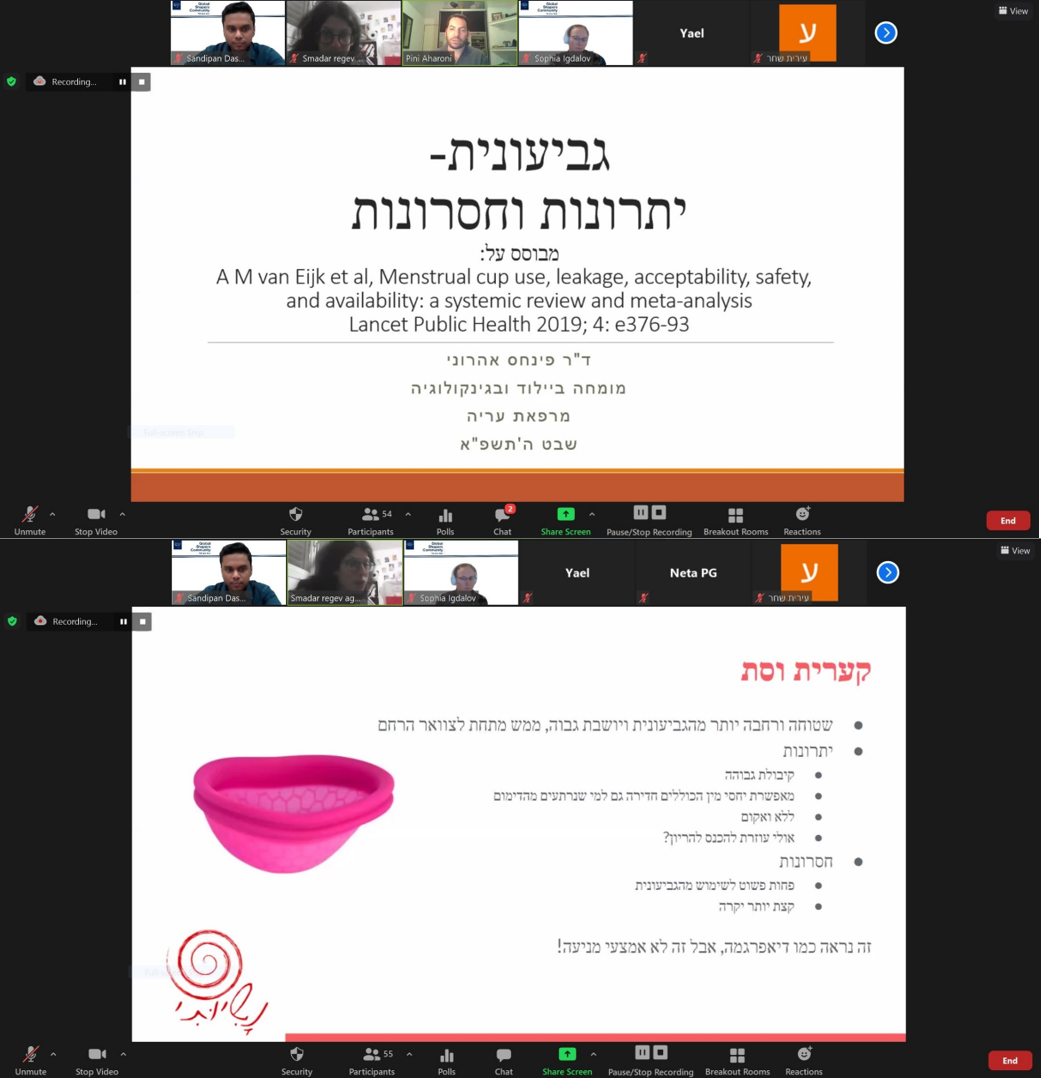 The recording of the workshop can be viewed here:

Following is a compilation of frequently asked questions that can be taken away from the workshop regarding using menstrual cups:

Q: Can the cup hurt the pelvic floor or cause uterine prolapse?

A: No, as the suction is relatively mild. It can aggravate existing uterine prolapse if pulled the wrong way.

Q: Can the cup hurt while urinating?

A: No. However, everything inserted into the vagina has the potential to interfere. If it hurts, it is probably inserted wrongly.

Q: Can I use the dryer to clean the products?

A: It is always advisable to check the manufacturer’s instructions.

Q: What if I have a short cervix?

A: Most women have an average-sized cervix. About 5% of women have a shorter one, and there are smaller cups for them – but it is recommended to have it measured before.

Q: Is there a certain age to use it?

A: It’s the exact same as the other menstrual products. There are specific sizes for teens.

Q: Is there less bleeding when you use the cup?

A: Probably not. Some women say that, but probably that’s because they are more aware of their bleeding after using the cup.

Q: When should I replace my cup?

A: It’s recommended to change every 10 years. If the cup is cracked or has changed color, it should probably be changed.

Q: How should I disinfect the cup?

A: The cups can be “cooked” in boiling water (with adequate caution that it doesn’t melt), or can be heated in a microwave after dipping it in water. Chlorine tablets can be used for outdoor use. What’s even more important than cleaning the cup is always cleaning the hands.

Q: How frequently should a cup be washed?

A: Good quality cups don’t have to be washed more than once a day (with soap and water) and disinfected once every month.

Past and future perspectives

With an inspiring start to the campaign, the workshop can be summarized by the following numbers:

The hub looks forward to involving both men and women from diverse social and economic backgrounds to make more women strongly consider making sustainable choices in managing their menstruation.