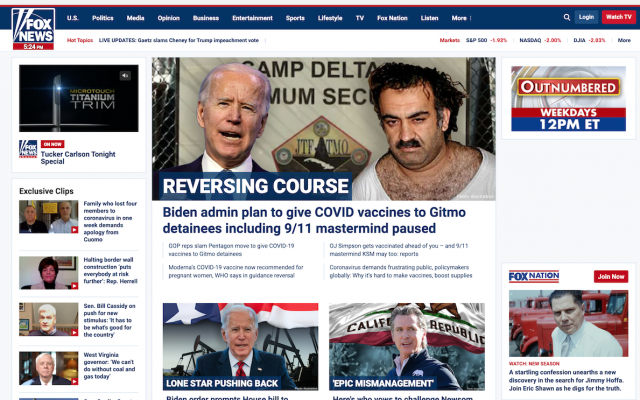 If you go to the GOP Twitter account or the front page of FoxNews, you will see a lot of stories on many topics, mostly targeting the actions of Democrats. The one-story you will not find is the one about Representative Greene and her statements on executing Democrats and accusation that Jewish Lasers started the deadly fires in California.

This is in stark contrast when any Democrat or person connected with the left makes an antisemitic public statement, whether it is Marc Lamont Hill, Nick Cannon, Congresswoman Occasio-Cortez or Congresswoman Tlaib, or anyone associated with Black Lives Matter. This silence has allowed the comments by the Qanon conspiracy Congresswoman to not show light on her character, her character has been known for some time, but the true character of the Republican party.

For many years, while we saw the rise of Far-Right antisemitism, while we saw comments and dog whistles from Donald Trump, the party has been silent. This all the while, they made largely symbolic gestures toward Israel like acknowledging Jerusalem as the capital when in fact it had been the capital since 1948 and Golan Heights which have also been Israeli territory since 1981. But when it came to condemning and calling out the antisemitic violence from their ranks, their silence and the silence of America has been deafening to American Jews. Why this double standard?

It is possible that the double standard is because the Jewish community in America is split 25/75 between the wealthy supporters of GOP and the largest middle class and poor who supporters of Democrats. The wealthy supporters are generally well-insulated from antisemitism and who support Israel and more importantly, support financially the Republican party. The support comes from wealthy donors such as Sheldon Adelson, who contributed 500million dollars to the Republican races, 70% of his total “charitable” contributions.

Now the idea that the Republican party would hold its members accountable is in many ways actually contrary to who they are. The Republican party today is largely Evangelical. Evangelicals by and large support the conversion of Jews to Christianity and support Israel out of a deeply held religious belief that when all Jews are in Israel, that the second coming of Jesus will occur. If one were to attend an Evangelical church on a Sunday, one would be likely to hear sermons that are not at all positive of Jewish people. This would be in line with Republican statements, which generally have strong support for Israel, but rarely speak positively or with support for the Jewish people. This again shouldn’t be surprising since Envagelical voters don’t hold positive views of Jewish people and the majority of Jewish people do not vote Republican.

What is surprising, however, is how the press, Jewish and non-Jewish, American and Israeli, seems to ignores this dichotomy in Republican response when the antisemitism comes from the left, vs the antisemitism from Republicans and the right. There appears to be massive public pressure for any Democrat who expresses antisemitic feelings to apologize and to repent, especially when they are black. A case and point was a TV personality Nick Cannon, as a result of his comments, who lost his job and went on an apology tour.

While the hypocrisy from the Republican party isn’t new, the question I have is, why is it that they get a pass for this from Jewish publications like the Forward, Tablet or Israel or Jerusalem Post or Haaretz or Republican Jews when no Democrat would ever get a pass. In fact, the only publication I could find that did report on Greene and her comments with respect to accountability was the one publication that is read by white supremacists: Breitbart.

Perhaps it is fear. Republicans are far less able to handle criticism. Criticism of Republicans is quickly countered with “what about” and anger. Perhaps the Jewish right fears that speaking up could cost them support from Republicans, which would only continue the propagation of lack of accountability from Republicans.

So why does the American Jewish community continue to allow itself to be exploited and used as the Bank of Republican Party while they do nothing to stop or address the antisemitism in America and their own ranks? If we can answer that questions, perhaps we can then start to hold both sides of the American political landscape accountable, and end the use of Jewish people and our suffering as a political tool.