One of the distinct advantages of having attention deficit disorder is that, with any article or book, I can skim or even skip entire sections. As a skimmer, on Shabbat afternoons, I often took a random volume of the Encyclopaedia Judaica off the shelf and just assumed I would find many things of interest. 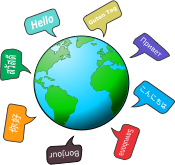 As it happened, a few years back I came across “Greetings and Congratulations” – 2 1/3 pages of all the things Jewish people say on various occasions. For examples: When someone does a Mitzvah that brings you benefit, Yasher Koach (instead of thank you); in reply to a friend asking how we are doing, Baruch HaShem – Praise God is appropriate, though my friend Arnie Draiman reminded me that Baruch HaShem Yom Yom – Praise God every single day, is even better; Shana Tova for the New Year, Chatima Tova on Yom Kippur; at a Bar or Bat Mitzvah, wedding or other Simcha, naturally Mazal Tov; and at the other end of the spectrum, at a Shiva, no words of greeting until the mourner opens the conversation.

There are even two that are not so well known: If you see a friend whom you haven’t seen (this means actually seen — not e-mailed, nor Facebooked, nor sent SMS’s — for a month, you recite Shehechayanu, and if it has been a year, one that is a bit heavier, Mechayay HaMetim, who has brought the dead back to life.

One of my very favorites (Brachot 31a) is this: “One not should part from another with trite chit-chat, nor laughter, nor other forms of levity, nor superficial things, nor worthless subjects, but rather with a word of Halachah (Jewish Law) because that way he will always remember the person.”

Five comments: (1) When I was at the Jewish Theological Seminary, good-bye to friends was often something like, “See you on the Quad” or “See you at The Bush” (because the icon for JTS was the burning bush that was not consumed); (2) In my discussions with students and audiences, working from the English and ignoring the Hebrew grammar, they conclude that it means also that you will always remember the word of Torah the person taught him or her; (3) Any speaker knows that it is more difficult to give a 12-minute talk than one 45 minutes long; (4) what is particularly appealing about this statement in the Talmud is that the persons saying good-bye have to have prepared something meaningful and that what they select will reflect something of their Jewish soul, (5) Word of Torah brings to mind the Yiddish phrase, “Zog mir a shtikl Toirah — Say for me a piece of Torah.”

Saying hello and good-bye and expressing oneself in a compact, meaningful manner are not easy tasks. Even more difficult when a person encounters something awesome: gazing at the fjords in New Zealand from the deck of a cruise ship, walking from room to room at the Hermitage, hearing one of the great tenors at the Sydney Opera House, or reacting to God’s finger touching Adam’s on the ceiling of the Sistine Chapel. What could anyone possibly say that doesn’t seem superficial?

My problem began when I thought I remembered that there were other readings of the text that said a word of Torah (instead of Halachah). In fact, that is the way the Talmud Yerushalmi has it.

There was yet another version that stated a word of Chochma. (The pre-eminent scholar of Rabbinic texts of the previous generation, Professor Saul Lieberman, z”l, explained that at that time, Chochma and Halachah were synonymous.) By the time I reached the limits of my energy level searching, I had at least 10 books, some weighing four pounds or more, off the shelves.

Reviewing all of the above, my personal thoughts are that, obviously this kind of encounter is a superb and frequent educational opportunity. Furthermore it provides some moments of depth to what might be a routine day of work, errands, and the like.

Psychologists have studied and proven that Elders who do crossword puzzles keep their minds more active despite the aging process. Similarly, this text is a constant reminder  that there is more depth and meaning to life than mere day-to-day living. I personally much prefer Torah over the Halachah wording.

Certainly delving into the laws concerning paying bills or why someone asleep in synagogue services is still counted in a minyan is of interest, but Torah is so much broader including the incredibly vast Aggadah (lore) of sermons, biographies, the human interactions of the hundreds of figures that are mentioned, and twists and turns of insights that might not otherwise be covered in the Halachah.

Finally, and I think most significantly, it radically changes a relationship: Putting this text into action transforms chaverim/chaverot (friends) into a new realm – chaverim but also moreh/morah (teacher) and talmid/talmidah (student). This could be particularly significant for someone who never understood himself or herself as a teacher. To my mind, in the 21st century this relationship has been narrowed down too much to the classroom, when the broader meaning we have explored is sorely needed.