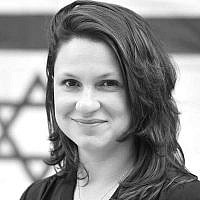 At our house, well before Hanukkah commences we pull out our dreidels and menorahs and adorn our dining room table with the symbols of the miracle of the eight nights. Recently, I watched as my nine-year-old daughter explained the rules of the dreidel game to her six-year-old sister. It was an emotional moment for me on many levels. The pride I felt witnessing my elder daughter passing on a tradition played around the world for so long! My six-year-old working hard to play accordingly, a beautiful mind who sees the world in her own unique way. (Their one-year-old brother attempted to take part but was summoned away from the match.)

Competition can be harsh.

It was a simple question from my daughter about two different dreidels that caught my attention.

“Po” (here) is on a dreidel from Israel, where the miracle occurred. “Sham” (there) is on the dreidels from other countries since the miracle took place not there but in the Land of Israel.

A difference of one simple word in the blessing and yet such a significant difference in meaning.

Especially at this moment.

Celebrating the great miracle that took place in the Land of Israel.

We are living through a frightening reality of a rise in antisemitism. Parents in Michigan dropping off their children at Hebrew school recently were confronted by a passing van whose driver recorded himself as he shouted profanities at them simply for being Jews, their children’s ears not immune to the vitriol being spewed at them.

In the community where we live, antisemitic graffiti adorns a popular walking trail complete with images of Jews with nooses around their necks and a swastika.

Physical attacks against Jews are an everyday occurrence in America, as they have increasingly become in other places in the world. In New York City’s Penn Station last month, police stopped two men with weapons who were on their way to commit a heinous crime. Only days before, an FBI warning across the Hudson River in New Jersey had worried parents picking up their children early from Jewish institutions as the FBI kicked off a statewide manhunt for men who had threatened to commit violence at unidentified synagogues. And most recently, a group of Jewish boys was chased with a taser gun by someone yelling abuse.

We are living in a time that many of us would have believed we were well past.

And yet in the United States, hate crimes against Jews are at a historic high.

The light of Hanukkah.

The miracle it brought to our people in a time of such darkness.

There is darkness like that around us right now.

And that is why there is no more fitting moment for us to be able to unite and Shine a Light on antisemitism.

We at Hadassah are proud to be part of the Shine A Light initiative and to continue to use our network of women Zionists to educate people on how to fight antisemitism and celebrate Jewish pride and Zionism.

This Hanukkah, we will light three menorahs in our home.

To shine light out of the window in each direction.

Not only for our neighbors to see, but for the world to know.

We will ensure that our light shines bright.

We will sing our Hanukkah songs, eat far too many sufganiyot and celebrate the great miracle that was, and the miracle that is.

About the Author
Michelle Rojas-Tal is a global speaker, trailblazer and advocate on Zionism, Jewish identity, and Israel engagement. Amongst her current projects, Michelle serves as the Zionist Scholar-in-Residence at Hadassah, The Women’s Zionist Organization of America.