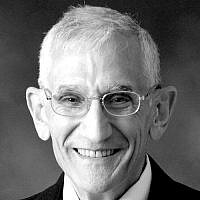 The Blogs
Edward M. Reingold
Apply for a Blog
Advertisement
Please note that the posts on The Blogs are contributed by third parties. The opinions, facts and any media content in them are presented solely by the authors, and neither The Times of Israel nor its partners assume any responsibility for them. Please contact us in case of abuse. In case of abuse,
Report this post.

Every week I listen to (or sometimes chant) the haftorah; but during the haftorah for two weeks of the year I am startled by memories of my father Haim Reingold. These two weeks are Shabbat Zachor, just before Purim, and Shabbat Chayei Sarah in the autumn.

My father Haim Reingold was born in Lodz, Poland on March 10, 1910. His father, my grandfather Shmaryahu, after whom my brother Arthur is named, had moved there from Minsk with my grandmother Esther Rudnianski at the turn of the century to find work. My father and his older brother Sam went to public schools. My father described the experience as unpleasant, anti-Semitic. For example, my father was short (5 feet, 5 inches tall) and the boys had to line up in order by height, so my father was at the end near where the gym teacher stood. My father described the teacher as a tall non-Jew who would poke my father’s head
with his keys as he called the boys to order.

Of course there is no haftorah at weekday Torah readings, so my father was simply called to the Torah for an aliyah. He never forgot this and so throughout his life did the haftorah for Parashat Zachor whenever it was available. (I do it too, when I can get it, in his memory.) That haftorah, from Chapter 15 of I Samuel ends with Samuel saying to Agog, “As your sword has made women childless, so will your mother be childless” and then hacking Agog to pieces. My father detested the violence of that passage, but every year he would read the haftorah or be distressed if he was not able to do so (if say, there was a bar mitzvah that week). On one such occasion he asked me if I could arrange for him to do it at my synagogue in Skokie—impossible because there are so many men who have an obligation to read it there.

The other haftorah that makes me think of my father is the haftorah we read for Parashat Chayei Sarah. This haftorah is from Chapter 1 of I Kings, describing King David’s old age and relationship with Bat Sheva. Verse 7 mentions “Yoav ben Tsruya.”

When my father’s family made aliyah in 1925, my father entered the famed Herzlia Gymnasium in Tel Aviv at which he excelled, despite being a new immigrant and having his education in Hebrew. (Yiddish was his mother tongue, but he also knew Polish.) His grades at graduation were all very high, especially in mathematics, but also in languages: Hebrew, Arabic, French, and German. His poorest grade was in English—which was ironic because that is the language he eventually read, wrote, and spoke most fluently and with a large vocabulary—I never heard him make a grammatical error or struggle to find a word; except for his accent, his English was perfect and sophisticated. Grades there were based on “bagruyot,” final graduation exams which were given orally to students by the teachers. These exams were semi-public.

Hayyim Nahman Bialik (1873–1934), the greatest modern Hebrew poet, lived near the Gymnasium. My father never mentioned his name without saying “that son of bitch Bialik” and my father never cursed. Why did my father dislike Bialik? Well, Bialik dropped in on my father’s Bible bagrut and asked a question: Who was the father of Yoav? My father knew the haftorah very well and quickly answered “Tsruya,” whereupon the committee laughed at him:

Tsrurya was Yoav’s mother. It was, apparently, a well-known trick question and my father was humiliated. He never forgave Bialik and forever after called him “that son of bitch.” So, whenever I hear or read that haftorah, I think of my father (and, of course, that son of bitch Bialik).

About the Author
I am a retired professor of computer science. PhD from Cornell. Orthodox Jew. Born & raised in Chicago, IL. Lived in Urbana, IL for 30 years before moving to Skokie, IL
Related Topics
Related Posts
Comments