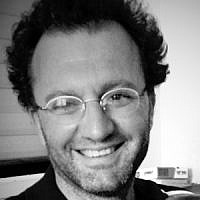 The Blogs
Yochai Ohayon
Apply for a Blog
Please note that the posts on The Blogs are contributed by third parties. The opinions, facts and any media content in them are presented solely by the authors, and neither The Times of Israel nor its partners assume any responsibility for them. Please contact us in case of abuse. In case of abuse,
Report this post.

A central mitzvah on passover is reading the hagaddah on seder night. “Tell your son”, it says, of the Jewish liberation from Egypt from the book of Exodus.

When we read the midrash of the four sons, each has his own question. Each requires a tailored response.

The version of the four sons is attributed to Rav Hiyya. Hiyya was a noted physician. He lived around the time of, and was presumably influenced by, Galen, a great medical researcher of the time.

Galen, leaning on Hippocrates’ humorism, believed that we are each made up of four vital bodily fluids, with our temperaments according to the mix of these fluids.

To quote Galen: “Sharpness and intelligence are caused by yellow bile in the soul, perseverance and consistency by the melancholic humour, and simplicity and naivety by blood. But the nature of phlegm has no effect on the character of the soul.”

Galen seeks to redress imbalances in temperament by focusing on environment, diet and occupation.

Our tradition, by contrast, restores balance through education. It becomes the duty of each parent to discern his child’s ‘temperament’ from his question. The corrective device is the Exodus story and how we relate it. In this way we ensure our children will grow to tell their sons in turn.

This midrash brought by (Dr) Rav Hiyya, suggests that our way of thinking about things affects our temperament, our physical health, in a profound way. It is impossible to overstate how radical an idea this is for antiquity. It anticipates cognitive behavioral therapy (CBT), which is only formalised almost two thousand years later!(Is this appeal to the power of narrative the secret sauce that affects the ‘phlegm’, whose contribution lay undetected?)

It Begins With a Question

Not unlike the father and the four sons at the Seder table, CBT trains us to become aware of our thought patterns, by uncovering the questions which mirror them, and by alerting us to which part of us is doing the asking (wise, wicked, silly, ignorant). Consequently we can curate our answers so that we stay balanced and grow to our potential.

As we sit at home this year, thanks to our unique challenge, we have more queries and resultant thoughts than ever. How should we best respond? Who did this to us? What’s going on? Perhaps we are even too overwhelmed to ask.

As we move into Passover and beyond, we should commit to following the edict in the story of the four sons. Which part of us is generating the questions? More crucially, which part of us is supplying the answers? That insight can help us to respond in a way that balances our thinking and propels our march to personal, national and global redemption.

About the Author
Yochai is a South Africa educated clinical psychologist living and working in Ra'anana Israel.
Comments