The Torah tells us that during Chol HaMoed Sukkot in the year right after Shemitta (like this year), all of Israel was to gather in Jerusalem at the Bet HaMikdash to hear the king read various sections of the Torah. Of course, that mitzva has not been performed since the destruction of the Temple; however, since the mid-1940s, there has been a commemorative event for this Mitzva.

The event is known as “HAKHEL” based on the words of the pasuk (Devarim 31:11)

Yesterday, more than 100,000 people assembled next to the Kotel for a Hakhel remembrance event. Seeing men, women and children of every stripe of Judaism was heart-warming. Hearing parents explaining to their kids what was happening was also amazing. (One father speaking to his daughter, who presumably was 7 years old, told her that she would be 14 at the next Hakhel. She thought that was the funniest thing!)

In attendance were current and former Chief Rabbis of Israel, President Rivlin and many other VIP’s. The stage was set up perpendicular to the Kotel and the crowd stretched as far as the eye could see. Putting aside politics (not an easy task for someone like me!), it was an exciting feeling! Hearing the President read the words of King David from Tehillim and hearing the Chief Rabbis reading from the Torah was incredible. 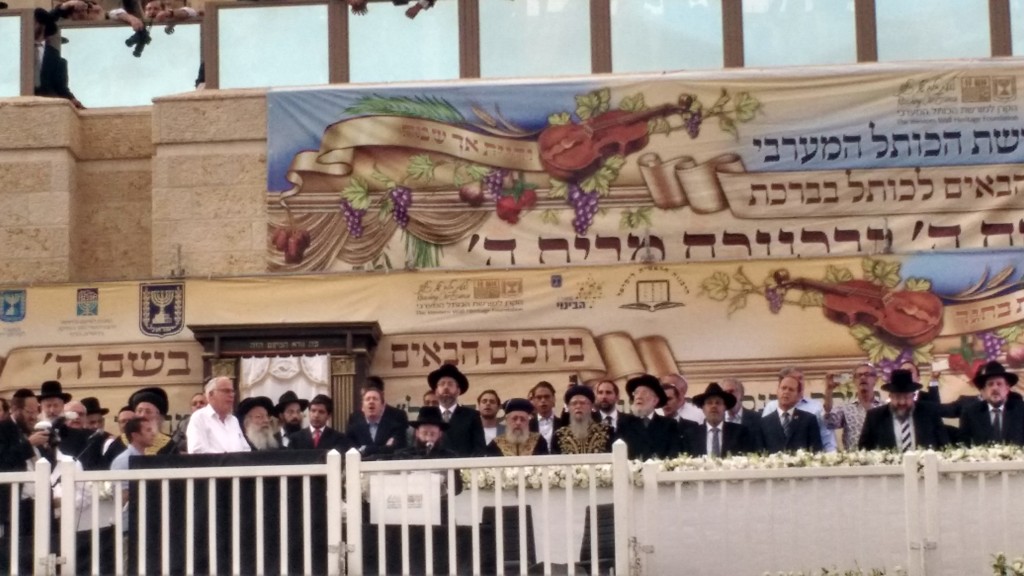 The above description is mostly a physical description. But, how did it FEEL to be there is the real question.

I have to say that, after six years in Israel, the times where I experience another “first” — something is rare at this point. Yet, having arrived on Aliya only a few months after the last Hakhel, this was indeed a fantastic “first” for which to be present!

Even for a moment, it had the feeling of the Jewish people standing at the foot of Har Sinai to get the Torah from G-d. Hearing more than 100,000 Jews accepting עול מלכות שמים (the recitation of Shema) in unison was a moment of inspiration that is hard to put into words. And the wonderful part is that it was being said by all of His children, no matter what they wore or didn’t wear; no matter what they believed or didn’t believe. Seeing a soldier (without a kippa) put his hand on his head to say the Shema was so touching. Little children straining to see the stage and grasping, in their way, the idea that they were witnessing a rare event — all of that added up to provide those in attendance with an overwhelming feeling of Ahavat Yisrael and a longing for more of this feeling.

Shemitta, sadly, served as a divisive issue between different communities. Perhaps, the advent of Hakhel right AFTER shemitta is to tell all of us that the time has come to re-unite and understand we all have only one mission on this Earth: to serve Hashem to the best of our abilities. And that can only be accomplished when we (literally and metaphorically) recite the Shema together.