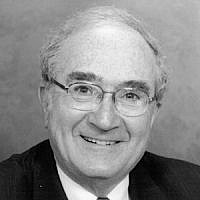 The Blogs
Norbert Weinberg
Apply for a Blog
Advertisement
Please note that the posts on The Blogs are contributed by third parties. The opinions, facts and any media content in them are presented solely by the authors, and neither The Times of Israel nor its partners assume any responsibility for them. Please contact us in case of abuse. In case of abuse,
Report this post.

The journey of the authentic Jewish way of life through the centuries has been a source of exactitude and inspirational precision. From the time of Abraham, through Sinai, the Prophets, followed by the Talmud and sages in every generation, have kept Judaism apace with its surrounding fluctuations. The Halacha … the Jewish code for everyday living, is a brilliant system which has kept apace with all scientific, medical and social change. Its very name implies “movement.” Its variations and accommodations have remained within the “four cubits” of Halacha. Other movements in Judaism, when faced with new conditions, have gone far beyond the strictures of Jewish law based upon many artificially manufactured reasons. Within traditional Judaism the details and spirit of the Halacha have been consistently maintained.
But all is not as perfect as it seems. Perhaps the greatest problem facing the observant Jewish world at the moment is that there is little unity. I refer specifically to those who are invested with chartering our religious paths. The fragmentation is huge and complex. Any thought of a centralized Sanhedrin (Supreme Court) is totally beyond the realm of expectation at this time. While there is the usual surge to enact Chumrot (prohibitions), there is very little movement to remove those strictures even when the reasons for their original enactments have completely disappeared.

I have a number of specific criticisms regarding this situation which I will list below.

1. Kitniyot is the Hebrew word for legumes. It consists of rice, corn, sunflower seeds, peanuts, soybeans, sesame seeds and peas, among others.
It seems that the ban on Kitniyot for Passover originated in early medieval France and Provence, progressing from there into Rhineland Germany. The prohibition against these foods only affected Ashkenazic Jews. The Sephardic communities were never concerned about this rabbinic proscription.

Various reasons have been offered for the origin of these products being forbidden. Some state that they were stacked in the same sacks as the five grains, creating the concern that they might become contaminated with Chametz. Also, these legume items were often made into products resembling Chametz, which caused confusion.
Placing all these details aside for the moment, the bottom line is unequivocally clear. Kitniyot (legumes) are not Chametz and, in today’s food marketing, there is no possibility of any Chametz mixing into legumes or being mistakenly recognized as such.

Under these circumstances, it would seem logical and entirely reasonable that Kitniyot be permitted on Passover. This is especially so, since the Sephardic Jews, in Israel and the Diaspora, do eat Kitniyot which, as formerly explained, are not Chametz in any way or manner. At this time, there are restaurants in Israel which advertise the inclusion of Kitniyot in their menus and there are other eating establishments which exclude legumes.

The plot thickens for the pre-Pesach shoppers. Food items are available with and without Kitniyot. The ingredients are often listed in tiny print and the shopper would be well-advised to take along a magnifying glass when shopping.

Since we are not dealing with Chametz on any level, it would seem reasonable and Halachically indicated that the rabbis end this matter once and for all. Yet, we know that this is not going to happen. What I suspect the scenario is going to be parallels what happened with the “Shabbat clock.” When these clocks first appeared on the market, a hue and cry was raised that they caused “Mar-et Ayin” (a false impression) created by lights going off and on in Jewish homes on Shabbat. But there were more and more who used the new method anyway until it was understood by all that it was the pre-programmed clock that did the job. Realistically, then, the Shabbat clock became permitted, not by Rabbinic declaration as it should have been, but by continued use – by default.

It is a disturbing observation that the Sages who should be the leaders in defining and legislating Jewish laws and practices are actually following the people. But it would seem that that is the price which we will have to pay until the formation of a universal Sanhedrin.

2. There is a weekly Shabbat morning prayer knows as “Y-kum Purkan” (“May Salvation Arise”). This prayer was composed in Babylonia in the Aramaic language and is recited on Shabbat mornings immediately after the Torah and prophetic readings. The first paragraph of this prayer directs its plea towards the welfare of the scholars of the Land of Israel and those of Babylonia. Now it must be immediately recognized that there are no more Jews in Babylonia. In fact, there is no longer any such country as Babylonia. Yet, prayers for this ancient and non-existent community go on unabated. There are some who have changed this text from Babylonia to “… those in all the lands of our dispersion.” Others contend that Babylonia may be considered a generic term applying to all countries outside of Israel.

While this is all well and good, one cannot help but wonder why the only word “Babylonia” could not – or should not- be periodically replaced by the names of the countries in which our fellow Jews are in actual need of our prayers. Even though this would be an infinitesimal change, it seems highly unlikely that, based upon our present structure, it would find a unified acceptance.

3. Tisha B-Av, the annual Jewish day of mourning for the destruction of Jerusalem and both Holy Temples, contains a very sad prayer, Nachem (“Console”). Following is the translation of some of the verses from this prayer which calls for our consolation. It describes the condition of Jerusalem.

“… the city that is in mourning, ruined and scorned and desolate… mournful without her children, in ruins without her dwellings, scorned without her glory, and desolate without inhabitants. She sits with covered head like a barren woman who never gave birth.”

This is the description of Jerusalem which our religious leaders have continued to have us describe Jerusalem since 1948 and 1967. No dwellings, no inhabitants, desolate and scorned! One wonders what the soldiers who gave their lives to liberate the city would think of these portrayals. The spiritual and physical growth of Jerusalem is nothing short of miraculous, yet we are to describe it in our holy Amidah (silent devotion) as desolate, without people and without dwellings!
Rabbi Shlomo Goren, the former Chief Rabbi of Israel, composed a somewhat different and upgraded version of this prayer, which is the one which I recite. However, it has not made its way into many Siddurim (Jewish prayer books). I remember, many years ago, that a prominent rabbi whispered to me on Tisha B-Av, “Don’t use Rabbi Goren’s version.”

To me, this is another example of how we are cast in stone. In fact, I am reminded of Lot’s wife who, by turning backward, was cast into a pillar of salt.
I sincerely hope that the above three examples will not be misunderstood. I have no need to eat kitniyot (legumes) on Pesach. I remember when the fare on Passover consisted of Matzah, eggs, some meat and potatoes. Today’s variety is beyond imagination. My concern is with the static position of our rabbinic leaders and their refusal to deal with legitimate changes when it clearly seems to be their duty to do so.

As I stated previously, any attempt to form even a semblance of a Sanhedrin at this time would be an exercise in futility. Perhaps one can hope for the gathering of even a group of leading rabbis who have the confidence and support of the majority of the Jewish people, to reinvest Halacha with its intended meaning and restore our observances in the traditions in which they were intended.

About the Author
Norbert Weinberg received Semicha from Yeshiva University in 1957 and has served communities in Quebec City,Canada,New Bedford MA, Fall River MA, Norwich CT and Newton MA. He has authored a number of books, the latest of which are "A Time To Tell" and "A Time To Share." With his wife, Susan, he lives half a year in Newton MA and half a year in Israel. Three of his daughters live in Efrat and one in Monsey, New York. Most of his twenty-four grandchildren live in Israel, as do his thirty-five great-grandchildren.
Comments