The Blogs
Lewis Rosen
Apply for a Blog
Advertisement
Please note that the posts on The Blogs are contributed by third parties. The opinions, facts and any media content in them are presented solely by the authors, and neither The Times of Israel nor its partners assume any responsibility for them. Please contact us in case of abuse. In case of abuse,
Report this post. 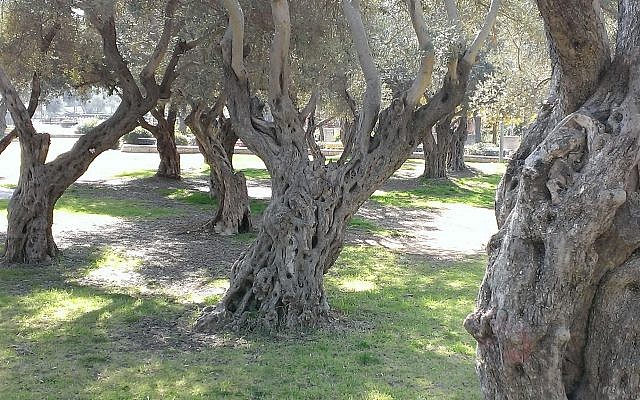 The Palestinians’ total denial of Jewish peoplehood and of the Jews’ deep historical connection to the land of Israel and Jerusalem, depicting Israel instead as a colonial enterprise without any historical or moral justification, puts an end-of-conflict peace beyond reach for the foreseeable future. Until Palestinians can accept Israel’s legitimacy there cannot be an enduring peace.

Those leading the various rounds of negotiations between Israelis and Palestinians since the Oslo Accords have focused on secular issues such as security, settlements, borders, Jerusalem, and refugees — all very important and difficult issues — but they have largely steered clear of the clash of narratives and the religious dimensions of the conflict. Halevi writes, “One reason, I believe, that the well-intentioned efforts of diplomats have failed so far is that they tend to ignore the deep religious commitments on both sides. For peace to succeed in the Middle East, it must speak in some way to our hearts.”

In any meaningful dialogue the Palestinians need to confront a richly nuanced presentation of the history and religion of the Jewish people and their never extinguished longing to return to the land of their forefathers. Jews were indigenous in this land for a millennium and are indigenous again. The Palestinians also need to hear a balanced account of the conflict, particularly the events of 1947-48 and 1967, and the ensuing years, including their leaders’ rejection of two-state offers that were made by Israel in 2000 and 2008 and which included major Israeli compromises.  Halevi provides such a vital presentation in his book. At the same time, he articulates an understanding of the Palestinians’ claim to the same land and expresses empathy for their suffering as events unfolded during the last 70 plus years, even though much of it was and is due to their leaders’ intransigence.  Notwithstanding his empathy for the Palestinians, and despite his strong support for a two-state solution, Halevi is not naive about the mortal dangers that Israel would face from a Palestinian state in the West Bank given the Palestinians’ deep enmity.

Through dialogue and empathy it may be possible for individual Palestinians to modify their rejectionist mindset. Halevi’s letters are, by choice, not addressed to Palestinian President Mahmoud Abbas or his colleagues, but rather to individuals at the “grass roots” level where change also needs to occur. In any case, Abbas has so much negative history as Palestinian leader and has delivered too many speeches rejecting Israel’s legitimacy in recent years for there to be any realistic hope for change.

As noted above, the Palestinian narrative denies the justice of the Jewish claim to the land. Some Israelis feel the same about the Palestinians’ claim. Halevi’s optimistic hope is that through acknowledgement of each other’s maximal dreams, which can only be starting points in any serious discussion, both side might be able to accept partition, though painful, as an appropriate mutual compromise that will end the conflict by providing partial justice to both sides. This is a highly important argument because “justice” is such a significant emotional issue, one that must be faced.

Yossi Klein Halevi is a religious Jew who made aliyah from New York to Israel in the early 1980s and writes, at times poetically, with an insider’s affectionate knowledge of Jewish tradition, ritual, and belief, a capability that secular advocates of Israel usually lack. He feels that surprisingly little effort has been made to tell in depth “the Jewish story.” He is also highly knowledgeable about Israel’s history since 1967, as reflected is his award-winning book, Like Dreamers.  Halevi has said that his approach in Letters is not “to score points” as so often is the goal of participants in debates and of writers of op-ed pieces.  Instead, the tone of the book is balanced, respectful, and cautiously hopeful, and offers many subtle insights.  Politically, Halevi characterizes himself as a “centrist,” and is critical of current stances of the both the Left and the Right in Israel. As a youth he espoused very right wing views, but they evolved significantly as he grappled with the paradoxes and complexities of life in Israel and confronted Palestinian realities and opinions.

As a religious Jew, Halevi relates frequently in his letters to prayer and belief, and discusses the meaning of several holidays in the Jewish calendar. He also has a strong grounding in Islam, and relates to some of its spiritual aspects in a positive and sympathetic way. In part this is because he undertook substantial outreach to Palestinians in the late 1990s and because he co-directs a major education effort by the Hartman Institute to present Judaism and Israel to young Muslim American leaders.

Halevi’s has said that his book really has two target audiences.  In addition to the Palestinians in the book’s title, he is writing it as well for Jews, particularly young Jews in North America.  Letters can be a real eye-opener for many young Jews about Judaism, Israel and Israel’s history, because their own Jewish education and knowledge of Israel’s history are often incomplete, and their views may be overly influenced by progressive critics who are overtly hostile to Israel.

Regarding Judaism and Israel, the story of a religious Jew who was so enthralled by his first visit to Israel shortly after the June 1967 Six Day War that he resolved to made aliyah is an exciting one. His personal odyssey once he came to Israel in 1982 and his descriptions of the diversity of the population and the complexity of the country’s many internal challenges is a multi-layered story that is so much richer and truer than the impressions that many young Jews have about Israel based on media treatments that are often superficial and unbalanced.

Regarding history, for North American Jews under the age of 35, events that occurred 50 to 80 years ago can seem like “ancient history” and hard to feel empathy for or identify with. Halevi successfully overcomes this distance by recalling the dramatic, exhilarating, and painful events of 1947-48 in a way that brings them alive and relevant to the present. In discussing 1967, when he was a teenager, Halevi vividly recalls the fears that Israelis felt in May 1967, and which he and other committed North American Jews shared from a distance, as Arab states mobilized for war and Arab airwaves were filled with rhetoric that called for the destruction of Israel.  Thousands of graves were dug in Israeli cities as the specter of a genocidal war against Israel became very real. Halevi recounts the emotional response to Israel’s sweeping victory, which also gave it control of Judaism’s most important sites for the first time. The elation following the war was heightened because of the terrible fears that preceded it. Halevi then reviews the factors that influenced the various stages of settlement activity in the West Bank. This history, starting in May 1967, is more nuanced and less black-and-white than implied by the description of Judea and Samaria (the West Bank) as “occupied territories,” an expression that Halevi consciously does not use in his writings.

For all these reasons, Letters deserves to be read by many young Jews.

In hoping for a dialogue that will lead, over time, to Palestinian acceptance of Israel’s legitimacy, which they have rejected until now, Halevi may be overreaching. In his first letter, he writes: “Neither of us is likely to convince the other of each side’s narrative. Each of us lives within a story so deeply rooted in our being, so defining of our collective and personal existence, that forfeiting our respective narratives would be a betrayal. But we need to challenge the stories we tell about each other, which have taken hold in our societies. We have imposed our worst historical nightmares on the other. To you we are colonialists, Crusaders. And to us you are the latest genocidal enemy seeking to destroy the Jewish people.” But because the Palestinians’ view of Israeli Jews as illegitimate colonial invaders is so central to their narrative, abandoning it might feel like “betrayal.” In that case, the desired change in how Palestinians view us may indeed be “a bridge too far.”

Halevi hopes that the two religions can contribute to an effort at reaching mutual accommodation instead of stifling it. Both Judaism and Islam have sacred texts.   Halevi writes: “ We need to seek out those generous voices embedded in our traditions and offer new interpretations of old concepts — which is, after all, how religions cope with change.” One may be skeptical about such hopes in light of the severe views expressed by many Muslim religious leaders (Palestinian and others) in sermons based on the more negative parts of sacred Islamic texts.

As mentioned, Halevi is reaching out to the Palestinian public rather than to Mahmoud Abbas. There will be other leaders sooner or later, but some of the obvious candidates would likely be no better than Abbas. It might take the emergence of an Ataturk-like leader, one ready to move towards ending the conflict via a negotiated partition, who would impose radical reforms on Palestinian education, media and religious teaching; such reforms could produce, over time, substantive changes in popular attitudes towards Israel. In the meantime, Halevi’s book, if read widely in its free Arabic translation, might lead to a growing minority within the Palestinian public who do accept Israel’s legitimacy. Such a development would make it easier for a leader inclined to push for the radical reforms mentioned above.

Regarding the author’s second target audience, the book can surely serve as an important educational resource within the Jewish world.