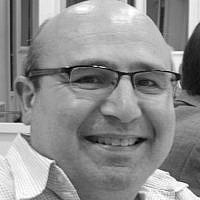 The Blogs
Juan Carlos Sanz Vazquez
Apply for a Blog
Advertisement
Please note that the posts on The Blogs are contributed by third parties. The opinions, facts and any media content in them are presented solely by the authors, and neither The Times of Israel nor its partners assume any responsibility for them. Please contact us in case of abuse. In case of abuse,
Report this post.

As we approach nearly a week in these terrorist attacks started by Hamas I am bewildered at the reaction of some actors in the International Community.  My first surprise as a South African is to find the government of Jacob Zuma  comparing Israel to Nazis: this is beyond belief, completely nauseating and it is certainly an insult to all Israelis, their government, and to all people of sound judgement around the world.

The second line of surprise comes from Philip Gordon, White House co-ordinator for the Middle East asking for respect to the ” sovereignty, security and dignity of Palestinians “.  My questions would be these:

Today the press reports that a Hamas terrorist on Al Aqsa T has just asked civilians to stay as human shelters in the roofs of houses despite the fact that the International Committee of the Red Cross acknowledges that Israel always warns civilians to get out of possible targets used by terrorists.  This is the dignity of Hamas:  using and abusing civilians as targets for their own evil, barbaric, criminal ends; using manipulation as a superb strategy to try and elate criminal minds in the Islamists´  mind who can only think, rumminate and joy with death because this is all they can offer the world, their political and religious ends.  And politically it suits them well because, as we all know from sociology, when there is no objective or goal in the group, having a common enemy or a scape-goat is perfect excuse.

The only way out of this is with peace but not at any cost.  We can only have peace when:

Let´s hope this terrorism from Hamas stops at once and that reality comes back to politicians, the P.A and Hamas.

About the Author
Born 1967 in South Africa (Port Elizabeth) In 1977 moved to Spain with family and studied primary and secondary school. B.A Honors (Marketing with French) 1990 -1994 in Republic of Ireland. Marketing consultant and languages teacher (2000 - 2011) in UK, France, and Spain. At present involved in 7 start up companies ranging from teaching languages to tourism in Spain. Fluent in Spanish, French, English and Portuguese. Basic Hebrew.
Comments