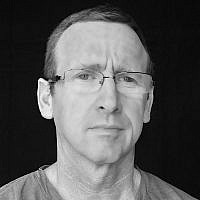 The Blogs
Ronen Itsik
Apply for a Blog
Advertisement
Please note that the posts on The Blogs are contributed by third parties. The opinions, facts and any media content in them are presented solely by the authors, and neither The Times of Israel nor its partners assume any responsibility for them. Please contact us in case of abuse. In case of abuse,
Report this post.

Discourse about ending the Israel-Palestinian conflict tends to be dismissive and despairing. People are ready to categorize the problem as insolvable.

Indeed, most Israelis and Palestinians believe the conflict to be not only insolvable but permanent.

People hold such opinions for two reasons. Firstly, for decades now, the Palestinian leadership has claimed that the State of Israel was built on the Palestinian motherland. That same leadership continually asserts that Jews stole Palestinian land. Successive generations have been inculcated with that idea.

The second reason that people accept the notion of that this conflict is without end is the Hamas regime, which holds 2 million Palestinians hostage. Recent headlines and op-eds by the Trump administration’s envoys to the region imply that they may even be ready to surrender to the idea that Hamas is an immovable object.

Connected as it is to the Ayatollahs in Iran, Hamas will never agree to sit down and negotiate. It is a brutal regime, designated a radical terrorist group by many parts of the western world. They will block any and all pragmatic proposals for ending the Israel Palestinian conflict – for as long as they are there.

Yet neither of these considerations means there is no way forward. There is a possible solution that must be considered. It exists, it is doable and it has a name. It is called the New State Solution.

It calls for a sovereign Palestinian state in the  Gaza strip, with contiguity into a section of the Sinai Peninsula – an area of land that is crying out for development.

Bordered by two stable, sovereign states – Egypt and Israel – and with an extensive shoreline – a New State, incorporative of a part of the Sinai, could be the “Out of The Box” solution needed to solve a seemingly impossible situation.

It has the potential to become another Dubai. It could be a turning point for the Palestinian people, enabling them to escape the poverty, violence, and culture of victimhood that currently exists.

The New State is a dream come true for them.

Click here to watch a video on the New State Solution.

To move this idea forward, those who care for the future of the region should assist in creating massive awareness about the idea on social media, traditional media and other mediums. It should be written about, debated and opined upon. Conferences should be convened and the merits of the idea should be presented, challenged and defended.

If the idea takes hold but at the grass roots and the grass tops, it will change for the better the discourse about the Israeli-Palestinian conflict. This is an idea that can be propelled forward by a momentum born of hope and anticipation for a better life for all Palestinians. The idea has the potential to convince Palestinians to turn away from past leaders who have delivered them nothing, and to instead chart their own course in the image of the future they wish to lead.

Such momentum can win the day. But with one clear caveat; Hamas must be removed. Hamas is an obstacle to any viable future. It must be deposed.

Ridding Gaza of Hamas would grant a real opening for pragmatic leadership that can adopt the “New State” idea.

Their presence has been tolerated for long enough and while many within the international community have designated Hamas a terror organization, proclamations are not sufficient. The primary source of the problem in Gaza is economic scarcity. To convert that into economic prosperity and opportunity, we must eliminate those who stymie the economic goodwill father international community – namely Hamas.

Envoys of the Trump administration seem very willing to discuss economic betterment for the Strip, but they seem equally unwilling to do anything about Hamas beyond highlighting its intransigence.

Let me be clear. In order to implement the economic fix that Gaza requires, Hamas has to be demolished. There are two ways in which this could be done.

With the New State Solution as the economical and political ‘fix’ for the region in the background; willing, key members of the international community could present that vision with an accompanying demand that Hamas disarms, backed up by a time limited opportunity to do so. Disarmament need not be a long, drawn out process.

If the Palestinian street comes to view a militant Hamas as the obstacle preventing a better life, Hamas’s days would be numbered. They could be compelled to accede to a call for disarmament by their own people.

If Hamas refuses to step aside, a determined military operation should be launched with a view to crushing all of its terror infrastructure. Such an operation will last for several months, and casualties will be an inevitable feature of such a campaign, but such realities must be viewed in the context of the reckoning that must be leveled at Hamas in order to usher in a brighter future.

Without Hamas in control, and with an international effort led mainly by the Trump administration, who clearly see that the Oslo process is a failure, the New State Solution could be converted from a vision to a reality within a decade.

About the Author
Col. Ronen Itsik (Res.) was an armor brigade commander in the Israeli Defense Forces. He is a Ph.D candidate specializing in examining civilian-military relations. Ronen published the book "A Man in a Tank" that became a bestseller, describing military service and combat situations against terror organizations from his point unique, specialized perspective.
Comments