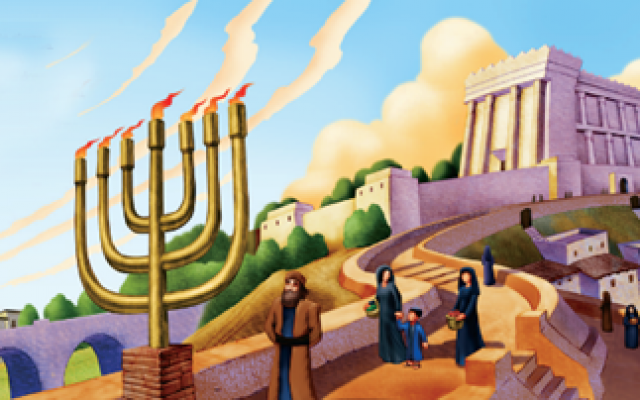 Image from the story of Hanukkah, Basely, Tilda, Harrington David

With the holiday of Hanukkah approaching, we are reminded of the miracles we celebrate every year:

Yet, it was only recently, during a trip to Mexico that I realized there was yet another miracle, often overlooked, without which none of the above miracles would have had any meaning. This was not a miracle performed directly by God, but rather one enacted by our people.

The ancient Greeks ruled over Israel from the 4th to the 1st century B.C., where they imposed their cultural traditions on the inhabitants of our land. Unfortunately, many of our ancestors adopted their Hellenist customs and abandoned Jewish practices during their rule. Interestingly, the moment the Maccabees expelled the Greeks from our land, there was a return to Torah and a regeneration of Jewish faith among the people who restored the temple and the holy practices in the land (Some of it had to be done by force).

While I have always cherished how the heroic Maccabees saved our heritage, it wasn’t until my visit to middle and South America that I realized that we shouldn’t take our people’s return to Torah for granted. In my traveling I discovered the peculiar relationship between Mexico’s people, most of whom have indigenous roots, and the Catholic Church which was introduced to Mezzo-America by the Spanish conquistadors in the 16th century. I was surprised to discover the disconnect between the people, most of whom are now Catholics, and the brutal history whereby the Catholic Spaniards destroyed much of the population, tried to eradicate its culture and forced conversions on the remaining inhabitants. The Spanish conquistadors ruled over Mexico for a little over two centuries but, despite the Mexican natives’ hatred for the Gachupin’s (native Spaniards) and their expulsion in the early 19th century, the population preserved their conquerors’ new Catholic religion, deserting their own indigenous traditions.

As a Jew, I belong to a nation that has suffered exile, persecution and forced conversions which diverted many of our people from our original faith, whether during the Spanish Inquisition, the Crusades, the Muslim domination, or the pogroms perpetrated by other European persecutors. Yet despite losing many Jews to foreign religions, our people adhered as best they could to Torah, building Jewish life when possible and moving to places where they could continue to live as proud Jews.

My Mexican tour guide shared the great enthusiasm with which Mexicans practice their Catholic religion. Over 85% are Catholics, the Church is an important player in their everyday lives and, despite some old indigenous habits and traditions that still remain, their followers’ numbers are small.

How could this be?! I asked myself. How can victims so willingly adopt their tormentors’ religion? Why haven’t they returned to their ancient traditions?

Returning home, I realized how similar our history could have been to that of the indigenous Americans. The conditions among Jews were very precarious as conquerors repeatedly tried to eradicate our observance. This helped me understand that had Jews clung to the new Hellenist beliefs, similar to how the indigenous Mexicans adopted Catholicism, we wouldn’t be practicing our Jewish tradition today.

The true miracle of Hanukkah is that in addition to the Maccabees’ victory and the miracle of the oil that lasted for eight days, our Jewish ancestors fought to maintain Jewish practices, at all costs, carrying it along with them into the future.

Today, with Jews living in exile for two millennia, we are once again facing the problem of assimilation, only this time without being forced by the sword and it’s unlikely that the Maccabees will be coming to our rescue. So, we need to remember to help our children embrace their heritage and welcome back all who have left our fold, so that our Jewish future and progeny will continue on.

About the Author
Soli now lives in the US, but he was born in Romania and later lived in Israeli boarding school Hadasim, as part of the Aliyat Hanoar. He served in the Israeli Air Force, and graduated with a degree in architecture from the Technion. After settling in Jaffa, he moved to the US and had several businesses. He has been married for 40 years, and is the father of 4 and grandfather of 7.
Related Topics
Related Posts
Soli Foger