Hanukkah was the first post-biblical festival in Judaism. It is the only Jewish holiday that is not mentioned in the Mishna. In fact, even its reference in the Talmud is incidental. In tractate Shabbat (21b), during a discussion on Shabbat lights, the Rabbis mention Hanukkah in the following passage:

What is Hanukkah? The Sages taught: On the twenty-fifth day of (the month of) Kislev there are eight days of Hanukkah…for when the Greeks entered the Temple, they defiled all the oil in the Temple. When the kingdom of the Hasmonean dynasty (the Maccabees) arose and defeated them, they searched but could only find one flask of oil that was set aside with the seal of the High Priest. However, it contained only enough to burn for one day. A miracle took place and they lit from it for eight days. The following year they established them as festival days with praise [of God] and thanks.

Note that the Talmud does not say that they instituted a festival because of the military victory over the Hellenic army, but rather because of the miracle of the oil. This, the first mention of this occurrence, is in a source that was completed almost seven centuries after the events described! The Rabbis deflect attention from the miraculous aspect of the military victory, in which a relatively small number of Jews manage to defeat one of the most effective fighting forces in the world, and instead focus on the miracle of the oil, which previously had been unmentioned in any other written source. 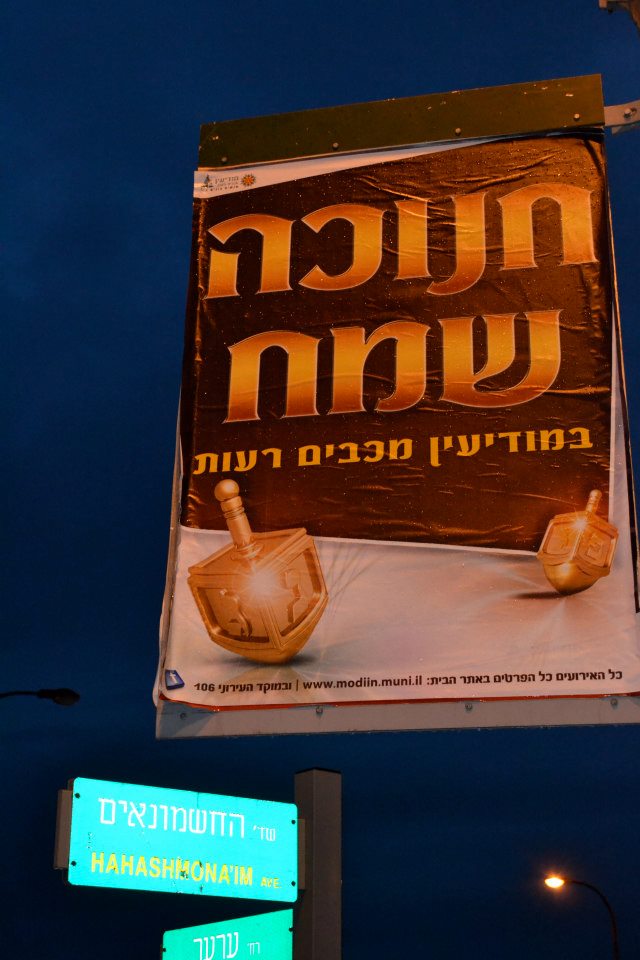 A possible reason for this shift in focus is that the Rabbis were attempting to “demilitarize” Judaism. They were writing in an age when the Jewish people were exhausted and severely depleted numerically after a series of disastrous revolts against the Roman Empire, culminating with the Bar Kokhba Revolt (132–135 CE). The purpose of these military revolts was to shake off foreign rule and hasten the advent of the Messiah. The Rabbis felt that the way to preserve Judaism for the future was not through military revolution against overwhelming forces; rather, they emphasized study of Torah and observance of the commandments (mitzvot). This is what would bring the messianic age, which would arrive slowly, “like the dawn.”

An additional reason for this new emphasis on the miracle of the oil is that the Rabbis were probably disappointed that the Hasmoneans had morphed into what they fought to replace. The succeeding Hasmonean rulers had concentrated both secular and religious power into their hands. In the process they had become extremely corrupt and, ironically, Hellenized. The second generation already carried Greek names, such as Aristobulus and Hyrcanus. This Hellenization gained impetus through the annexation of neighboring, already Hellenized, provinces. Judah Aristobulus proclaimed himself king in 103 BCE and added Philhellene, meaning lover of Hellenism, to his name. Some Hasmoneans even massacred fellow Jews who opposed them and their policies, including Jewish leaders, and they (possibly forcibly) converted pagans to Judaism. Therefore, the meaning of Hanukkah evolved from a nationalistic festival commemorating the founding of the Hasmonean dynasty through military victories and the rededication of the Temple. It became a symbol of Jewish opposition to foreign rule and a celebration of freedom. However, some scholars claim that at most the Jews wanted religious freedom and autonomy and that the Hasmonean Revolt was not a war of independence.

Interestingly, even though the Rabbis vigorously attempted to suppress the military nature of the holiday, it is precisely this point that attracted the early Zionist movement to this holiday. Hanukkah has been observed in contemporary times with growing diligence for two main reasons: First is its proximity to Christmas. The increasingly secularized Jews in the western world have needed a holiday to “counterbalance” the Christian celebrations. 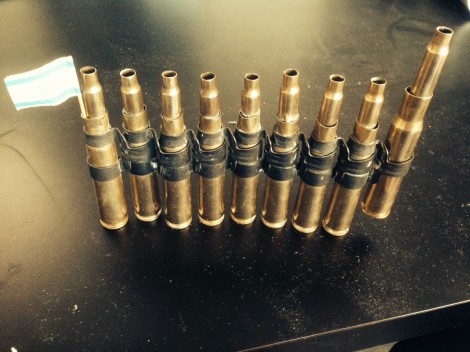 Hannukiah I made out of cartridge cases during my IDF service. Photo (c) T. Book, 2021

Secondly, the secular, even anti-rabbinical, early Zionists latched onto the story of Hanukkah to gain inspiration. The aim of the early Halutzim (pioneers) was to create a “new Jew” to recapture the glories of what they perceived as the wonderful ancient Jewish past in the Land of Israel. The Halutzim wanted to be worthy of the title “descendants of the Maccabees” (Bilalik). They hoped to reestablish a strong Jewish presence in the Jewish homeland. This depended on their reviving the Jewish language, the ability to farm and build, and their ability to defend themselves. In the words of Chaim Herzog, the father of the current President Isaac Herzog,

In Israel today, Hanukkah has become a holiday that inspires the modern nation, as it commemorates the ancient struggle for independence. Today’s Israelis see themselves as successors to the Maccabees, the few who won their freedom and independence by daring to face the many.

The above is an extract from my latest book, published last week by Koren. “Jewish Journeys, The Second Temple Period to the Bar Kokhba Revolt, 536 BCE-136 CE.”

“Jewish Journeys” cover. Photo (c) Tuvia Book and Koren, 2021
About the Author
Dr. Tuvia Book was born in London and raised in both the UK and South Africa. After making Aliya at the age of 17 and studying in Yeshiva he volunteered for the IDF, where he served in an elite combat unit. Upon his discharge he completed his BA at Bar-Ilan University, as well as certification in graphic design. He then served as the Information Officer at the Israeli Consulate of Philadelphia, while earning a graduate degree in Jewish Studies. Upon his return to Israel, Dr. Book graduated from a course of study with the Israeli Ministry of Tourism, and is a licensed tour guide. Tuvia has been working in the field of Jewish Education, both formal and informal, for many years. He has guided and taught Jewish students and educators from around the English-speaking world for some of Israel’s premier educational institutions and programs. Tuvia has been guiding groups for Birthright Israel since its inception and, in addition, has lectured throughout North America, Australia, Europe and South Africa. Tuvia served as a Shaliach (emissary) for the Jewish Agency for Israel as the Director of Israel and Zionist Education at the Board of Jewish Education of Greater New York (Jewish Education Project). He was a lecturer/educational guide at the Alexander Muss Institute for Israel Education (AMIIE) in Israel for a decade. Tuvia has lectured at both Bar Ilan University and Hebrew University. He was a Senior Editor and Teaching Fellow at the Tikvah Fund. He is a research associate at the Hudson Institute. Tuvia is the author and illustrator the internationally acclaimed Israel education curriculum; "For the Sake of Zion; A Curriculum of Israel Studies" (Fifth edition, Koren 2017), and "Moral Dilemmas of the Modern Israeli Soldier" (Rama, 2011) and has a doctorate in Israel Education. His latest book, "Jewish Journeys, The Second Temple Period to the Bar Kokhba Revolt – 536 BCE-136 CE," was published by Koren this year. To order: https://korenpub.com/products/jewish-journeys
Related Topics
Related Posts
Comments