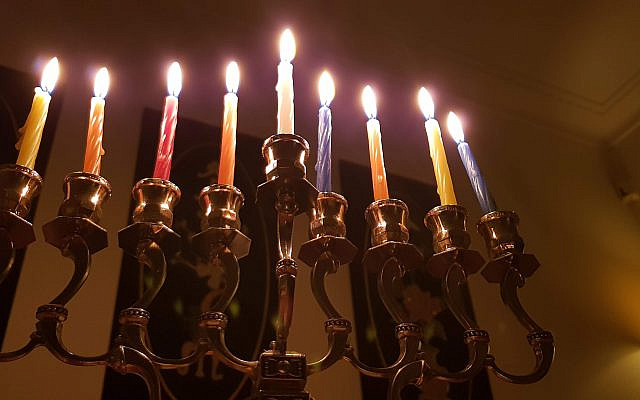 A long time ago in an ancient land, a darkness had descended upon the Jewish people. The country was occupied by the evil Seleucid Empire, led by its king Antiochus. His mission was to destroy the Jewish people by denying them their freedom and identity. He forced them to worship false Gods and idols. He desecrated their temple and tried to force respected elders to eat pork in flagrant violation of Jewish laws.

The Sabbath was outlawed.

Thousands of Jews were put to death.

Fear was like a thick blanket of fog that suffocated the land and her people.

But even at our most desperate hour, hope refused to die and the Jews, a stubborn stiff-necked people, refused to succumb to this oppression and refused to give up their identity.

And from the thickness of this darkness, a light sprung up, ignited by a small bunch of rebels called the Maccabees, powered not by numbers and weapons, but by the unshakable belief in who they were and what they were fighting for.

Their strength lay in their love, not their hate.

Against odds that were insurmountable and a military power they could not match, they somehow succeeded in throwing out a superpower and reclaiming Jewish independence in the Land of Israel.

And when it came time to rededicate the Holy Temple in Jerusalem, a temple that had been desecrated and defiled and debased, they could only find enough oil for one night, and yet a miracle occurred, for the oil that should have lasted one night – lasted eight.

The darkness that was so overwhelming, the oppression that was so suffocating, the evil that was so black – was banished, dispelled by the light of this single jar of oil.

Today, 2200 years later, the story of Hanukkah is not just about our past, but about our future. That battle for our identity against all those who would wipe it away, continues. Even yesterday, 129 countries in the United Nations passed a resolution that said Jerusalem, our most ancient and precious city, steeped in Jewish history thousands of years old, was not Jewish at all, but only Muslim – even though Islam didn’t exist until roughly 800 years after the Maccabees liberated the Jewish temple.

I always find it ironic, but not surprising, that while world leaders wish the Jewish people a happy Hanukkah, they continue to try reverse that victory of ours, by saying that all the battles the Maccabees fought was on land they say we are occupying today.

The story of Hanukkah is a war story about a people who fought for their freedom and their identity against not only an evil foreign empire, but also against many of their fellows Jews who also wanted to oppress that Jewish identity and dismiss all our history and traditions and dedication to the Torah and Hashem. Tragically in today’s society we see many of those Jews still – those who openly side with our enemies in the attempted destruction of our people and our land, willing to give up everything that makes us Jews, on the altar of social acceptance.

But just as they failed in the past, they will fail in the future.

Because most Jews today understand that Hanukkah was about fighting for our identity and in today’s world, that’s never been more important, for if they had failed back then, there would have been no more Jews and no more Israel.

The story of Hanukkah is a war story, but it’s also a love story. It is the story of how we should love ourselves and be proud of who we are, of our traditions, of our nationhood, of our Torah and of our identity.

Freedom is not something that is easily won or easily held, for it can be as fragile as a dandelion in a breeze. And yet we need to protect it and cherish it and honour and respect it and fight for in any way we can, because to lose it would be to allow that darkness to descend upon us once more.

The Maccabees died many years ago, but the spirit they ignited lives on in every Jew, and that flame of light that burns in all of us, must never be allowed to be extinguished.