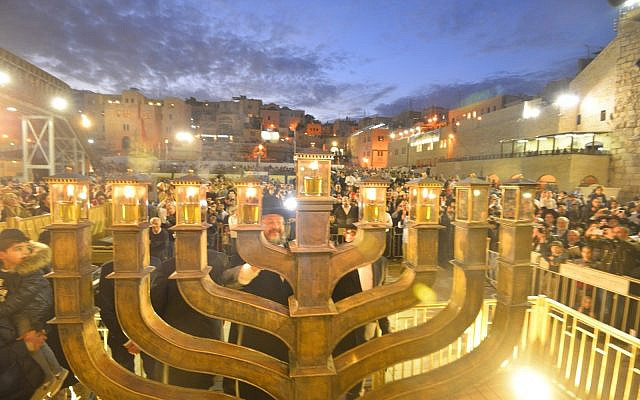 Menorah lighting at the Kotel, via Creative Commons

Every group within Klal Yisrael agrees that there are major problems within the State of Israel. While each wing and subgroup would argue on what those issues are and how to solve them, it seems everyone can agree that these issues exist. Not just small issues, but fundamental problems that will dictate the future of our people.

Focusing on such issues has caused some to question their allegiance to the state. This is absolutely understandable. For 2,000 years our forefathers dreamt utopian dreams of Jewish sovereignty in Eretz Yisrael. It is unlikely that government corruption, weekly protests, constant violence, and persisting deep questions of identity were part of these dreams. Instead of a utopian fantasy, we got a real state in the real world with real problems. Realizing this, many Jews have begun to wonder if the State of Israel is still a worthy cause to serve, still something to be proud of, still a reason to celebrate.

The answer to this question can be found in the celebration of Hanukkah. Writing on the subject, the Rambam codifies the official reason for the season:

“During the period of the second Temple, when the Greek kings were in power, they proclaimed decrees against the Jewish people, abrogating their religion and forbidding them to study Torah or to perform the divine precepts. They laid their hands on their wealth and their daughters; they entered the Temple and broke through it, defiling things that were pure. The People of Israel were sorely distressed by their enemies, who oppressed them ruthlessly until the G-d of our fathers took pity, saved and rescued them from the hands of the tyrants. The Hasmonian great priest took victories, defeating the Syrian Greeks and saving Israel from their power. They set up a king from among the priests and Israel’s kingdom was restored for a period of more than two centuries, until the destruction of the second Temple.

When, on the twenty-fifth of Kislev, the Jews emerged victorious over their foes and destroyed them, re-entered the Temple where they found only one jar of pure oil, enough to be lit for only a single day; yet they used it for lighting the required lamps for eight days, until they managed to press olives and produce pure oil.

Because of this, the sages of that generation ruled that eight days beginning with the twenty-fifth of Kislev should be observed as days of rejoicing and praising the Lord.”

While most of the explanation is common Hebrew-school knowledge, the part about establishing “a king among the priests” should stick out as bizarre and historically incorrect, upon a simple reading of the text. First, the Hasmonean dynasty is regarded in the hindsight of Jewish history as corrupt, oppressive, and self-destructive, making it strange to list its establishment as one of the reasons for celebrating Hanukkah. Second, pointing out that they were kings “from among the priests” shows that Rambam is aware and consciously pointing out this fact, as kings are only meant to come from the tribe of Judah (Bereshit 49:10). Third, Israel’s kingdom was not truly “restored” as its kings were of a completely different and fundamentally illegitimate line than the previously-ruling Davidic dynasty. Finally, the Maccabim never established a monarchy at all. The Hasmonean dynasty was established by Shimon haTassi, a Macabbi who took the title of nasi (prince or president), not melech (king), and established an ummah (commonwealth), not a mamlacha (kingdom) out of a conscience deference towards the Davidic dynasty and the halacha (Jewish common law) that supported their unique claim to royal legitimacy. It was not until forty years and two nasi’im later that Aristobulus I began referring to himself as melech, a title which stuck for the remainder of the dynasty.

The only way to understand these perceived inconsistencies and inaccuracies is to understand that the Rambam was not referring to the establishment of a “kingdom” in the literal sense but in a more general way, to mean a sovereign governing body. The work of the Macabim was not the literal restoration of the kingdom, or the establishment of any kingdom at all, but a more general restoration of Jewish sovereignty in Eretz Yisrael. This, in spite of the corruption and ineptitude of the Hasmonean dynasty, is reason enough to celebrate with “days of rejoicing and praising the Lord.”

Yes, the State of Israel has problems. A lot of problems. Arguably not as bad as the problems in the Hasmonean Dynasty, but problems all the same. However, if we can celebrate the inauguration of the Hasmonean Dynasty with one of the most widely beloved holidays on the Jewish calendar in spite of all of its problems, surely we can find it within ourselves to celebrate the State of Israel as well.