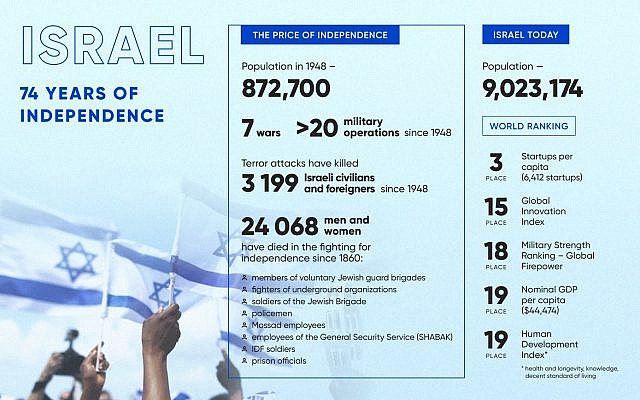 For the first time in 74 years Israel’s Independence Day will be held today without celebratory fireworks, in order not to create additional stress for the people with PTSD (post-traumatic stress disorder). There are more and more of them in Israel due to constant missile attacks every year, and in recent months Ukrainian refugees who survived the Russian shells, mines and missiles have also added to them.

Quite recently, shortly before the war, Israel and Ukraine celebrated the 30th anniversary of the establishment of diplomatic relations. At the third #KyivJewishForum, all its participants talked about the historical kinship of our peoples, about how much we have become closer over these 30 years, about the contribution of Ukrainian Jews to the formation and development of Israel, and about what Ukrainians should learn from the successful Israeli experience in the struggle for independence and in technological development.

Now the picture of the unity of Israel and Ukraine has sparkled with new colors. Israeli special forces volunteers are fighting in Ukraine for its freedom. Israel accepts Ukrainian refugees and provides assistance with medicines, hospitals, protective equipment, and soon, perhaps, with weapons.

To understand how difficult the path to independence is, are able only the people who themselves have been striving for it for centuries, and found it 74 years ago. Then, among the signatories of the Declaration of Independence, there were 10 persons from Ukraine, and the document itself was signed in the house of an Odessa native Meir Dizengoff. Nowadays, almost all areas of Israeli life are somehow connected with Ukraine – politics, economics, business, the army, social and religious activities.

I am proud that immigrants from Ukraine have participated and continue to participate in the building of their own home for all Jews in the world – an independent, free, comfortable and safe State of Israel.