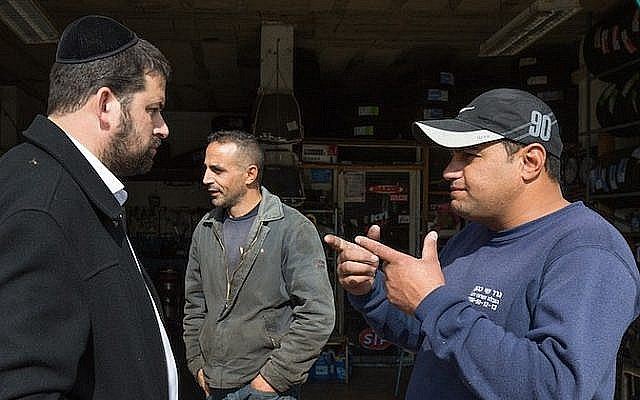 An ultra-Orthodox Jewish man from the Israeli settlement of Beitar Illit seen talking with Arabs as he gets his car washed at the Hussan Junction Palestinian-owned car wash in the West Bank, on November 11, 2015. (Nati Shohat/Flash90)

Israel faces two strategic predicaments whose resolutions entail huge risks and costs: the occupation of the Palestinians, and the culture war with the Haredim.

The political map, ossified by tribal voting, prevents concurrent handling of both: the uproars which would be sparked by any concessions to the Palestinians leave no energy for anything else; and change in the status quo with the Haredim requires secular parties who fiercely disagree about the Palestinians to work together.

The demographics make matters urgent. Do nothing and Start-Up Nation will be replaced by a binational country with a mostly Haredi Jewish portion, within the lifetime of some readers.

Until now governments have prioritized the Palestinian issue: the right pressing for settlement of the West Bank and Gaza in hopes of cementing control; the left struggling to block this and promote separation, if possible within a peace deal.

Nothing has worked as the Jewish settler population keeps growing, which is both an affront to the Palestinians and an own goal for Israel.

Meanwhile, Israel is again gripped in a sort of election fever. The corona crisis and the first-in-the-world second lockdown now ending, the absurdity of Benjamin Netanyahu’s bribery trial and the infighting in the “unity” government have created an end days atmosphere. There is a sense that Netanyahu is not long for his seat, and everyone has scenarios for the day after. What kind of leadership and government will emerge?

It’s time to consider a paradigm shift: parties from the left and right might agree to freeze the West Bank situation as they join forces to reframe the country’s relationship with the Haredim. Public opinion, shocked by the widespread Haredi mutiny over corona guidelines, is ready and senses the need for a change.

Can the Palestinian issue really be put aside for a while?

After all, if Israel does not ultimately detach from the West Bank the current “Palestinian autonomy” fudge will not prevent it from ceasing to be a Jewish-majority country. As the impossibility of separation sets in, the resulting political entity will no longer be able to pretend to be democratic, and it will not even be prosperous (with the Palestinians factored in). Key data point: the 14 million people in Israel, the West Bank and Gaza are equally divided between Palestinians and Jews.

The occupation is a danger and a stain and must end, but this seems impossible for the moment because the Palestinian leadership is not prepared to abandon impractical positions and the Israeli left is incapable of decisively winning elections.

Jewish Israeli public opinion was pushed to the right by the Second Intifada, which featured suicide bombers attacking buses, cafes and malls, followed by their parents handing out sweets and urging their other children to become “martyrs” as well.

Two reasonable offers – from Ehud Barak and Ehud Olmert – were allowed by the Palestinian leadership to float away unengaged, fueling a sense of hopelessness.   And the 2005 Gaza pullout led to a Hamas takeover and intermittent and sometimes intensive rocket fire on Israel, discrediting even among some reasonable people the idea of a similar gamble in the more threatening West Bank.

A few more years won’t change much, provided the settler population is held in check.  If anything, memories of the Second Intifada will fade, which would be helpful. And upheaval over the Haredim could reboot the political map and enable more intelligent policies toward the Palestinians.

Here, then, is a snapshot of the Haredi situation:

There is no law or principle that requires this madness to continue. Liberalism does not mandate tolerance of absolutely everything. It’s pretty clear what needs to occur:

In addition, some combination of the state and private money should provide overwhelmingly resonant aid to any Haredi youth who choose to break out of the ghetto and go to work.

All this will cause a massive outcry. But there is no real way for the Haredim to compel Israel to continue to fund its own destruction. Their expectations will adjust and a realignment will occur.

This is not possible with Likud at the helm, since the right wing’s majorities have always depended on the Haredim. But fortunately, Benjamin Netanyahu’s position has been weakened by his sordid encounters with the law, and there are now two useful insurrections on the right.

The first is Avigdor Liberman’s Israel Beiteinu party which has its roots among secular Russian-speaking immigrants and which broke from the right-religious bloc last year, mostly over the Haredi issue. Now it may be joined by the nationalist-religious Yamina party of Naftali Bennet; this is a far-right party that incudes fascistic elements – but it is not Haredi and is patriotic, if misguided.

Polls show the secular center-left plus these two parties could well command a majority without having to rely on the United Arab List, which is (disgracefully) anathema to Bennet.

Bennet scares a lot of people and it is my fervent hope that he will never be prime minister.  Israel desperately needs the anti-Netanyahu coalition of the center-left and the Arab party to control a clear majority. But once that is achieved a coalition with Bennet is worth considering if it undertakes to do no further harm in the West Bank and tackles the Haredi issue instead.

Revising the country’s suicidal arrangement with the Haredim would do more than address a huge problem. It would restore some faith in civilizing notions that have become strangely radical: that not everything is narrative and facts still hold sway, and that reason has not lost all ability to persuade.