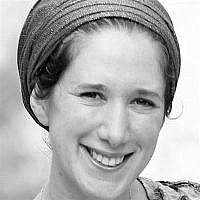 The Blogs
Sara Daniel
Apply for a Blog
Please note that the posts on The Blogs are contributed by third parties. The opinions, facts and any media content in them are presented solely by the authors, and neither The Times of Israel nor its partners assume any responsibility for them. Please contact us in case of abuse. In case of abuse,
Report this post.

Disclaimer: This review of Harry Potter and the Cursed Child does not contain any significant spoilers, but I do discuss some general plot lines and one or two details that are revealed very early on. I can only imagine that if you haven’t read the book by now, you are probably not an HP fanatic anyway, so go right ahead.

Let me answer the first question Harry Potter fans all over the world are asking themselves: “Should I read this book?”

Yes, of course you should. Why ever not? Unless you are the kind of reader who has devoutly avoided the Harry Potter movies in the fear that seeing Daniel Radcliffe, Rupert Grint and Emma Watson in Hogwarts uniform will tamper with the sacred images of Harry, Ron and Hermione in your head, then go ahead — spend a few more hours savoring a new encounter with the magical world.

But be warned, however, that this magical world is a screenplay, not a novel. The magic of the wizarding world that comes to life in Rowling’s indulgent descriptions — the colors, the scrumptious little details, the narrative flourishes and blots — all these are mostly absent from the dialogue, and even from the extensive stage directions. With no available tickets until May 2017, I can only imagine that these voids are filled with special effects and West End scenery, and that Rowling’s meticulous characterization is replaced with convincing acting. As it is, screenplay rather than novel, the widely spaced script reads quickly, and is evocative of the wizarding world rather than transporting — think two-way mirror, not Portkey.

The first scene is a reenactment of the final scene of book seven, “Nineteen years later.” I could forgive the fact the scene is rewritten slightly (and yes, the HP geek in me immediately took note of every deviation from the scene in Hallows), but the adult versions of the series’ protagonists were a letdown. Harry struck me as largely characterless throughout the play; perhaps I’m too accustomed to the narrative focalization through Harry and the extensive insights into his thoughts and emotions to be able to read the adult Harry character as more than a stereotypical father who is unable to connect with his teenage son. Hermione retains her classic know-it-all facade, without any real depth. I imagine that both characters could be brought to life through the right actor, but on paper, they come across as somewhat flat. Perhaps as a concession to the fact that many consider Ron superfluous in the series, this Ron plays the fool outright — he is the butt of many jokes, the comic relief.

I was more disturbed by the re-characterization of Ginny. In the books, Ginny gradually emerges as a strong, brave character — witty, non-girly, tough and popular. The only striking feature of the adult Ginny Potter, however, is her envy, which is wholly absent in the series; she has no good lines, or any of the redeeming qualities of the original character.

The new characters are nothing too special on paper either. A play lacks the room for the depth of character a novel can provide, and Albus Potter and Scorpius Malfoy are merely a classic pair of teenagers with various familiar traits distributed between them (one is bookish with an unrequited crush, one is headstrong, rash, and misunderstood by his father, etc., etc.). You’ve seen it all before.

Overall, the play is in close dialogue with the books. Some parallels are neat and pleasing; others are superfluous. In one early scene, Albus, Scorpius, and a new female character take Polyjuice Potion and masquerade as Harry, Ron and Hermione in the Ministry of Magic. The scene is clever enough, if lacking subtlety. Other parallel elements don’t work quite as well; Harry’s dreams in transition scenes are almost completely redundant, as is the prophecy which neither comes to pass nor is fully explained.

The plot unfolds as many classic plots do; a conflict within a wider conflict, with a climatic twist towards the end that solves both conflicts. This climactic revelation is not quite convincing to any reader closely familiar with the character of Voldemort. For a reader willing to suspend disbelief when it comes to an entire magical world, complete with Boggarts, Patronuses, and Horcruxes, I do wonder if I’m being nitpicky in this respect. Even in a magical world, however, characterization ought to be consistent. In any case, while not fully sound, the twist does lead to a pleasing dramatic climax where past, present and future meet.

Time is a central theme in this work. Harry Potter and the Cursed Child offers a particular future for the characters of the Harry Potter series. It portrays the adult Harry, Ron and Hermione in predictable roles and family situations that hardly deviate from the descriptions Rowling provides in her post-Deathly Hallows interviews. There is no new magic in Harry’s future; we meet the same Time-Turners, the same Polyjuice Potion, the same Chocolate Frogs. Even a magical world, it seems, has its limits — Cursed Child does not introduce a single new magical spell or concept. This particular future is not particularly satisfying, either. We don’t really want Albus to be in Slytherin, and it’s never clear why he is.

Interestingly, while this work invites us to accept this particular future, its plot is most reminiscent of The Butterfly Effect (not a movie I enjoy being reminded of, unfortunately). With a not entirely convincing plot twist, Albus and Scorpius are launched into new alternative futures which are more bizarre and bleaker than their “real” future. Yet I couldn’t help but take a step back and ask myself if this “real future” was significantly more convincing, or more inviting, than either of these alternate futures. What makes a fictitious narrative’s fictitious future its authoritative future? Must we accept this future because J. K. Rowling’s name is on its cover (even though she didn’t actually write the screenplay)? Need we take this story any more seriously than any random piece of fanfiction? How does a story qualify as the accepted narrative future in the reader’s conscious? I found that the nature of the plot brought these questions too easily to the surface, challenging the work’s legitimacy as the “real” continuation of the Harry Potter series.

For now, then, I’m not sure I accept Harry Potter and the Cursed Child as the “authentic” future of Harry, Ron, and Hermione. Perhaps I’ll feel differently if I ever see the actual play, if the acting and atmosphere move me to willingly suspend my disbelief. (I have actually renewed my long-expired passport and begun saving for a trip to London). On its own, the bare script doesn’t draw me in deeply enough to be tucked away in my consciousness with the Harry I grew up with. But should you read it? Of course. You might want to borrow it, though, before you decide whether it deserves a place of honor on your shelf, next to Harry Potter books 1-7.

About the Author
Sara Daniel should definitely be writing, translating, cooking, reading or generally contributing to society instead of browsing on Facebook.
Related Topics
Related Posts
Comments