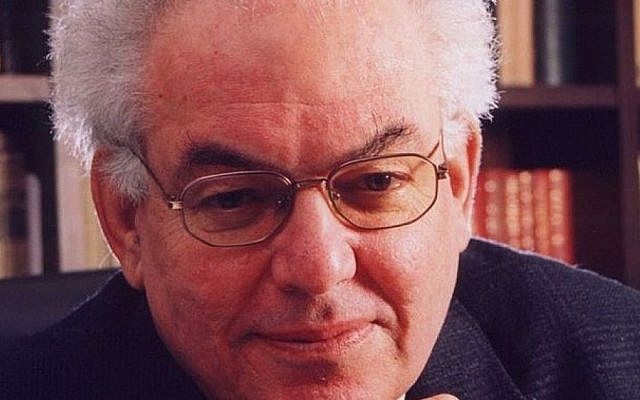 I was blessed in my life to have learned from Rabbi Hartman on multiple occasions and in varied settings; through his books and sitting at his feet. He shaped my rabbinate and made me proud of the Jew that I am today.

With his passing, the world seems poorer and the heavens richer. As it teaches in Lamentations (5:16), The crown of our head has fallen.

Summing up his life in a series of sentences or paragraphs would do an injustice to the impact he made on the modern Jewish world. I would like to touch on what are, for me, a few of Rabbi Hartman’s greatest professional legacies.

One such achievement was to empower rabbis and leaders. The greatest gift I received in my rabbinate has been the opportunity to participate in the Rabbinic Leadership Institute at the Hartman Center – the brainchild of David Hartman. Rabbi Hartman knew first-hand how lonely the rabbinate could be. He also knew intuitively the deep need for collegiality and having forums to ask tough questions and find support.

David Hartman taught countless ancient texts to rabbis around the world, but one lesson seemed to transcend each manuscript: be courageous. Hartman taught in word and modeled in deed that the greatest gift a rabbi possesses is the power to foster change. He was energized to see the elasticity of our tradition stretched by a brave soul who could challenge our ancestors, not discard them; wrestle with them, not submit to them.

Through the stories, teachings and anecdotes that color the life of David Hartman, the blessing he gave me that I most appreciative is the gift of deputizing me – or shall I say, infecting me – with courage.

Rabbi Hartman’s last book, The God Who Hates Lies, was a tour-de-force of how leaders in the community need to be as compelled by the spirit of the law as they are with the letter of the law. Rabbi Hartman reminded all of us that the greatest leaders and heroes in the world are not the people that sit quietly in the pews, rather the ones that step up to the podium and ask, ‘why?’ or ‘how?’ or ‘for what?’ They are the people who wake up after dreams and try to actualize them. They are the spiritual advisers that reflect on the human asking the question, not just the question at hand. They are the people who are unapologetic in their hopes.

David Hartman’s spiritual legacy was in creating organic connections with our tradition and God. He despised a prefabricated theology and loved creativity and individualism. He believed that our voice should be part of the dialogue of our ancestors, not spectators recounting a great discussion. The first tool he gave everyone in his class was a hammer to smash down and deconstruct any canned understandings in our relationship with God, Torah and peoplehood. Once the wholesale thoughts were broken down, Reb David wanted each of his students to build up their own theology and relationship to God, organically. He distanced himself from imitation and encouraged individuality. The beauty in this process was witnessing Reb David learning from his students. He would ask them about their thoughts on God, Torah, Israel and peoplehood. He would beam from ear to ear hearing his pupils answers, like a third grade teacher admiring her students’ art projects – seeing the individual beauty in every representation of the craft; each stroke and color unique to the student and an expression of their own structure that was built organically. That brought David pride. And, it strengthened the foundation of his students’ Judaism.

If one asked Rabbi Hartman a question in class, seeking some erudite interpretation of a text in response, they would often be disappointed. He would rarely give a straight answer. Instead he would say, “That is an excellent question. You should go home and think of an answer to that question. Think about it for a very long time.” David Hartman demonstrated that most times our questions are far more important than our answers. That searching mattered more and that his answer was no more valuable than any one of his students. What better model could any teacher leave his pupils?!

My first face-to-face encounter with Rabbi Hartman was in 1997, as a rabbinical student studying in Israel. He was hosting a class on the revelation of God at Sinai at his newly dedicated Institute in the heart of Jerusalem. During the class Hartman was referring to God on multiple occasions and continuously called God, “He.” Then Hartman stopped himself and said, “When I say ‘He’ referring to God, I equally mean ‘She.’ And, if I say, ‘She,’ I mean ‘He.’ He, She – She, He – all I know is I still love my mother!”

The room erupted in laughter. Through those chuckles, Hartman was sharing the deepest side of himself; his commitment to making everyone feel included in the dialogue and bearing his own journey in the process. David Hartman believed that the texts were not only speaking to him but that he was speaking to them too. He never saw the Mishna or Talmud or Maimonides as history one would read and admire like art in a museum. Hartman believed these texts demanded the incorporation of our modern voice, much like a dancer needs a partner to work in rhythmic stride, step after step after step.

And finally, Rabbi Hartman made room for everyone in the conversation of our history and shared future. He would dance with anyone willing to be his partner, so to speak. That is why today, the Hartman Institute hosts forums for Christian theologians, Muslim clerics and Haredi Jews as well as special IDF officer training. It is one of the only addresses in the Jewish world that makes Reform, Conservative, Orthodox, post denominational and Reconstructionist Jews feel at home. To witness a Beit Midrash brimming with men and women of all ages and orientations, each with a different background, coming together in study feels like a small taste of what the World to Come must offer. That is the fruit that David Hartman planted. We reap from it today. It is sweet.

How much brighter our world is today for the candles David Hartman lit that burn within us; in the wicks of our courage, in the flame of our unique and personal connection to our tradition and God and the brightness that is hearing the many voices in our texts – ours and theirs – voices of yesterday and today.

May our candles shine eternally bright in his memory.

About the Author
David-Seth Kirshner is the senior rabbi of Temple Emanu-El, a Conservative synagogue in Closter, New Jersey. He is the past President of the NY Board of Rabbis, President of the NJ Board of Rabbis and a Senior Rabbinic Fellow at the Hartman Institute. Rabbi Kirshner was appointed to the New Jersey/Israel commission and is a member of the Chancellor's Rabbinic Cabinet at the Jewish Theological Seminary.
Comments

Thinking about the threats to our democracy
Joanne Palmer

‘Run. Get away from the Capitol!’
Steven R. Rothman