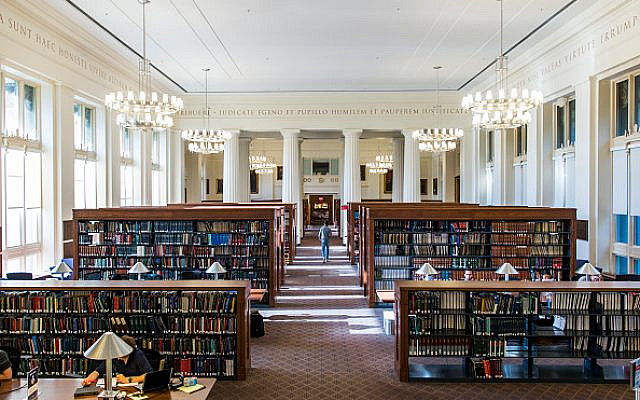 Students working in Langdell Hall Library on the campus of Harvard Law School in Cambridge, MA. Harvard Law School is the oldest continually-operating law school in the United States and is home to the largest academic law library in the world. (Photo by Brooks Kraft LLC/Corbis via Getty Images)

Clinicals serve as some of the most defining experiences in law school. As a student at Harvard Law, my participation in the Asylum Clinic formed the basis of years of pro bono cases which are among the most rewarding experiences of my legal career.

So it was with great chagrin that I read the Harvard Law School’s International Human Rights Clinic and Addameer’s Joint Submission to the United Nations Independent International Commission of Inquiry on the Occupied Territory, including East Jerusalem, and Israel entitled “Apartheid in the Occupied West Bank:  A Legal Analysis of Israel’s Actions.”

I take issue with much of the content of the report which concludes that Israel is guilty of the crime of Apartheid. It displays rather shoddy scholarship for future leaders of the legal world. Illogical conclusions, convenient definitions and assumptions, limited sources, one-sided review, and a total failure to understand the Oslo regime or to recognize the security situation pertaining to Israel speak poorly of the authors. They did not approach this project as advocates for truth and reason free from passion, but rather from a pre-determined bias against Israel. It is fairly clear that they would rather see dead Israelis than imprisoned Palestinian perpetrators.

The most egregious problem with the project and the one I will address, however, is the fact that a Harvard Law School clinic partnered with Addameer to educate its students in human rights law.

You might recall the PFLP from such hits as the Entebbe plane hijacking in 1976, the assassination of Israeli Minister of Tourism Rechavam Ze’evi in 2001, the house invasion and murder of the Fogel family in 2011, the massacre at a Jerusalem synagogue in 2014, the attempted assassinations of Rabbi Ovadia Yosef and Jerusalem Mayor Nir Barkat, and the murder of 17-year-old Rina Schnerb in August 2019 while hiking with her family.

The PFLP boasts quite a robust history of violence. Recognized by the US, EU, Canada, and Israel as a terrorist organization, the PFLP has been engaged in terrorism since it popularized airplane hijackings in the 1960s. What people may not realize is that it has never ceased its terror activities, nor has it ever recognized the State of Israel or any forms of negotiation. It is a firmly rejectionist organization that brazenly seeks the eradication of Israel through violence.

Furthermore, over the past two decades, it quietly but deftly infiltrated some of the oldest Palestinian human rights organizations and transformed them into money laundering fronts to finance its murderous activities with money from European governments. The organizations provided day jobs and legitimacy to PFLP operatives, while funneling money from fraudulently obtained foreign government grants and providing safe meeting locations.

Much of the international NGO community denounced the terror designation of Addameer and its compatriots last October, claiming it to be libel and an attempt by Israel to erase Palestinian civil society. One has to wonder, however, whether Harvard’s clinical professors looked beyond the self-righteous outrage of Human Rights Watch to examine whether there was any evidence to support the disgrace of Addameer before partnering with it as any lawyer worth his or her salt would.

Israel has been tracking this trend in Palestinian human rights organizations for years. The Gilad Shalit prisoner exchange deal resulted in the release of roughly 50 PFLP members back to the West Bank in 2011, where many immediately resumed their terrorist activities including kidnappings, murders, and attempted political assassinations.

Israel began to uncover evidence that some of these PFLP members now masqueraded as employees of a network of Palestinian human rights groups. For instance, three of Addameer’s employees – Khalida Jarrar, Naser Abu Khdair, and Bashir Al-Khairi – appeared on the ballot for Palestinian elections in May 2021 under the PFLP list.

Jarrar serves as Addameer’s vice-chairman while also working as the current head of the PFLP in the West Bank. A senior PFLP official, she accepted a plea bargain after being indicted for a number of offenses including her active membership in a terror organization and inciting the kidnapping of Israelis to be used as bargaining chips. She was involved in the terror cell that killed teenager Rina Schnerb.

Al-Khairi serves on Addameer’s board and is recognized openly in the Arab press as a “historic leader” of the PFLP, a member of the PFLP’s National Council, and head of the PFLP political bureau.

Salah Hamouri, a field researcher and self-described “lawyer” for Addameer, also was arrested and convicted for attempting to assassinated Rabbi Ovadia Yosef in 2005 while working for PFLP.

Mahmoud Jiddah serves on Addameer’s board of directors, but he also carried out two grenade attacks against Israeli civilians in Jerusalem in 1968 and was released in a prisoner swap in 1985.

Addameer runs a youth program to train children in international humanitarian law. Unfortunately, it employs Ismat Mansour as a teacher. Mansour was sentenced to 22 years in prison for participating in the kidnapping and murder of Haim Mizrachi in 1993 and has publicly stated, “I have no regrets…I was part of the struggle of my people.”

So much for the quality of Addameer’s leadership. Now let us consider what they did to subvert Addameer’s original, noble goal of providing legal counsel to indigent Palestinians. According to investigators, who shared their evidence with involved European countries and the US, Addameer and the other disgraced organizations defrauded European donors by doctoring their books to cover millions that they diverted to the PFLP.

They artificially inflated the costs of projects when presenting grants and then passed the surplus on to the PFLP. Employees were listed on the books twice, first as an employee of a specific project and then of the NGO; the second salary went to the PFLP. The NGOs collected donor money from Ireland, Norway, Spain, Switzerland, and Germany for equipment they never purchased and projects they never fulfilled.

These purported leaders at Addameer directed a massive scheme to raise money from European governments ostensibly for their Palestinian clients and human rights projects, and then funneled the money to the PFLP to finance acts of terror.  Witnesses disclosed the existence of an internal committee composed of known PFLP terrorists Walid Hanatsheh, Itarif Rimawi, Khitam Saafin, and Absul Razeq Faraj. They were responsible for managing the transfers of the money raised by the human rights organizations to the PFLP. The internal committee oversaw a separate external committee which reported directly to the PFLP central committee.  Hanatsheh, Rimawi, and Faraj were directly involved in planning the bombing resulting in Schnerb’s murder.

These are the activities that comprise Addameer’s legacy.And this is the organization with which Harvard’s IHRC clinic partnered to produce “scholarship” for the UN and an educational opportunity for its students.

As a general rule, any entity whose leaders pop up on Office of Foreign Asset Controls (“OFAC”) lists is not a quality partner for legal scholarship.

In 1999, I worked in East Jerusalem at al-Haq – one of the organizations classified as a terror entity alongside Addameer. At the time, the lawyers with whom I interacted and activists I met were good, honest, hard-working people and humanitarians. It pains me to learn how these valuable organizations have become corrupted over the years until their very missions have been subverted and contradicted by the violent crimes they facilitate. That does not change the fact that these organizations are no longer legitimate donor recipients.

My alma mater failed its clinical students. My hope is that Dean Manning will take note of this egregious error and withdraw the report from the UN. It is hard to imagine Harvard Law School tolerating such biased work with discredited partners.

As a proud alumna, I am watching and hoping.