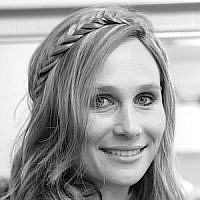 The Blogs
Tova Kramer
Apply for a Blog
Please note that the posts on The Blogs are contributed by third parties. The opinions, facts and any media content in them are presented solely by the authors, and neither The Times of Israel nor its partners assume any responsibility for them. Please contact us in case of abuse. In case of abuse,
Report this post.

When I hear the words Hadassah Hospital — My heart gives a little flicker — it’s a part of me. I am proud to be a part of that huge institution — working there from the start of my career as a clinical dietitian — learning from the best, working with the best — treating patients my best. Hadassah for me has always been a symbol of the best care possible.

I started my career as a dietitian in the Bone Marrow Department of Hadassah — one of the emotionally hardest places to be on a good day. It was my first encounter with cancer patients, mortality and many other aspects. What constantly amazed me was how the medical team- doctors and nurses — I would call the in my head “angels dressed in white” — were constantly there- giving of themselves night and day — bringing hope, care and love to all those around them who needed it. While it was the hardest department in the hospital — I had never seen such teamwork — every Monday morning after doing the rounds, the doctors, nurses and all those working in the department would sit and eat breakfast together and under the leadership of Professor Reuven Or and Dr Michael Shapira they would relate an idea from the Torah portion of the week- and connect the team — through good humor, care and concern not just for the patients, but for the carers as well.

Fast forward a few years and a few different departments later- I found myself working in the Pediatric Hemato-Oncology department. Once again, one of the most if not the most- emotionally hardest places to be. I would start the day asking the intern doctors why they chose this department to specialize in. – after a few weeks- it was plain to me why. You cannot walk into the Hemato- Oncology department and leave the same person. These children- who want to live, fight to live, dream to live have all the reasons in the world to hold on to those dreams- because of the dream team behind them. Starting from the top down. Professor Mickey – beside for being a renown doctor is a mentch. He will take the time of day to speak to the cleaner, nurse, patients, parents, students – and explain to them what they need to hear. He knew every nurse’s name in the department and made sure that they were all looked after. All the doctors and nurses follow his lead – the care, concern, quality of life and love given to each patient was mind blowing to me. The team that works in the department made up of the teachers from the school, the volunteers, the nurses, doctors, cleaners- are one tight knit group- where care and love go beyond the normal boundaries- where the children and parents can be sure and safe that they are in the best hands.

I have been on maternity leave for the last few months- and have not been working at the hospital. I have been reading the news and seeing what has been going on – and I am saddened by the state of events. All the senior doctors and residents that make up the Hemato-Oncology department have resigned because of a unilateral decision made by the hospital administration that children undergoing bone marrow transplants will undergo them in the adult Bone Marrow Transplant department and not in the pediatric department as was usually done. This is due to the fact that the doctor who performs the Pediatric Bone Marrow transplants has become the head of the adult Bone Marrow department and therefor it would make sense for all those undergoing transplantation to do it under her care in her ward. The doctors who have resigned have done so because they feel that the quality of the care for those children will be compromised and they are not able to stand behind this decision.

While I am not a doctor and my part in treating the patients was medical nutrition therapy – I can say that having had the opportunity to work in both departments- there is a clear difference in the treatment of children in the bone marrow department and in the children’s department. – From the medical side they would be fine- the head of the department is an amazing doctor in her own right – but on an emotional level – it’s just not the same – I have seen this first hand – between the children that come from overseas and who are treated in the bone marrow department and children treated in the pediatric department. Kids have to have hope and color and activities around the clock and a team of carers who have been trained to work with children and who know these children. Not just a pediatric doctor specializing in bone marrow transplants. This is what they get in the children’s department- and the parents have to have the other parents to connect with. And that is just a drop in the ocean…

But today- after I have seen the news and read what my colleges have written on face book I am so sad.

HOW COULD THIS HAVE HAPPENED???

The only department in Jerusalem dealing with the very sick children in this city has just lost all its doctors? And no matter what the head of Hadassah says that on Sunday they will bring in more doctors and everything will be ok… – how can it be ok? The fact that some of the children have to drive now to Tel- Aviv to get treatments. An hour and a half drive away for a child with neuro-blastoma is life threatening.

The fact that the new doctors do not know how the different children react to the courses of treatment. I will never forget hearing Dr. Mira explain to the nurses “this child reacts like this when he has this therapy so watch him closely…”

The fact that these children have been left and the parents have been left- without their doctors who have told them that they will do everything to save their child’s life.
Its absurd. and I feel that not only is this a huge loss for this city but it is a huge failure on the part of our society. We have the sickest, weakest people here – parents who just need to be looking after their sick children and we haven’t protected them – we have left them to fend for themselves. And they did. They started a group, raised money, went to the best lawyers to petition the opening of a new department with the doctors that they love and trust. – but were refused.

I didn’t think this could happen – I don’t think anyone did.

Where were we?
Where were the women of Hadasssah? – Hadassah – was started by Henreitta Szold as a milk clinic to prevent and treat sickness of the children of Jerusalem – that has grown into this enormous institution today. What would Mrs Szold say? (I was told “we are letting the management deal with this and not getting involved”)

Where was the municipality??? Once again, – the children of your city Mr. Barkat? Yes- you met with the parents – you heard them – and?…

Professor Rottenstein – a group of the best doctors came to you and told you that by doing what you were doing, you were compromising the care of their patients. Why could you not have listened??? I know it is hard as the head of a hospital to take into consideration everyone- but surely not at the expense of young children who have their lives ahead of them – there should have been another way. – you may have found new doctors but you haven’t solved the problem.

And it is said when you point a finger at someone you are pointing four fingers back at yourself.
Where have I been? I did write something months ago- when the doctors wrote their resignation letters- but I was advised against publishing it. I made some phone calls and tried to speak to the people involved from the side. I regret not doing more. Obviously not as much as the children who have been turned out to other hospitals or to the new doctors who don’t know them. Not as much as the parents who’s worst nightmare has not only come true but who now are left completely in the dark.

I do ask and dream and hope that we somehow can find a way out of this horrible situation- for the doctors whose only goal here has been to treat the sick children with uncompromising quality of care, for the parents who just want to see their children get better and for the children who are fighting to live. And for the city – so that all parents and children of Jerusalem and the surrounding areas know that there is somewhere to go if G-d Forbid the worst should happen…

With the festival of Shavout upon us- the festival when we as a nation are supposed to receive the 10 Commandments and the Torah- the book that keeps us ethical and moral and a light unto the nations- my call to action is – if there is someone who can shine a light and shed some hope on this situation- please do somehow, because one light that brought so much hope and light and life to so many people in this city has just been switched off.

About the Author
Tova Kramer is a registered clinical dietician specializing in the fields of pediatrics, eating disorders and weight loss. She lives in Jerusalem with her husband and five children.
Comments