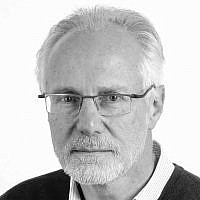 The Blogs
Glen Heneck
Apply for a Blog
Please note that the posts on The Blogs are contributed by third parties. The opinions, facts and any media content in them are presented solely by the authors, and neither The Times of Israel nor its partners assume any responsibility for them. Please contact us in case of abuse. In case of abuse,
Report this post.

Hate may be the best hope for peace in the Middle East.

This (perfectly serious) thought was triggered not by some great work of philosophy or political science but rather by a Facebook feed. For it was there, amongst the pop psychology hints and the stagey holiday snaps, that I found the essence of the conflict zeitgeist. Not left against right or South against West, or anything so grand; just righteous anger addiction, more commonly known as habitual, unreflective hatred.

The specific posts that brought the point into focus appeared immediately adjacent to one another. The one featured a series of grotesquely jingoistic quotes from a minor mullah, while the other involved a young Israeli soldier high-fiving a colleague after sniper fire felled a Palestinian nurse. I can’t vouch for the authenticity of either, but then that’s got no bearing on my thesis. It’s the fact that they were there which matters – and that they were put there by smart, well-educated, seemingly well-adjusted individuals. Individuals living 6000 miles away from the actual theatre of conflict.

So why the optimism? Well if decent people, with no actual skin in the game, can get so enraged on behalf of the side they’ve chosen that they’re able to picture the other side as demonic, sadistic, sub-human, it surely means that they’re not far from an epiphany. Intellectually at least. In insisting that the enemy be not only wrong but exulting in its wrongness they prepare the ground for their own illumination.

Surely they must be able to recognize – in their type two, “thinking-slow” brains – that this reading of the situation is deeply problematic. That it’s somewhere between ungenerous and untenable; between casually racist and egregiously wrong. And then, having broken the spell, so to speak, they can begin to rehumanize the “other” and to build a new way of seeing the conflict. A way not much different to the old one, except that it’s no longer a simple morality play, with one side pure and blameless and the other side evil and wrong.

This is not to say, of course, that there aren’t cases of groups of people in thrall to badness. To the contrary, history is littered with them, right up to the very recent past. Rather all I’m saying is that we should:

There’s also another implication that seems self evident to me, but that could possibly reflect my own bias. It’s that actual hatred, and violence, is more likely to emanate from those opposing the status quo than from those supporting it. From the Palestinians rather than from the Israelis, in other words. This is not to exonerate the latter, or to commend them – or to damn insurrectionary violence – it’s just a reflection of inbuilt power dynamics.

These considerations all apply to people like me and my Facebook friends (and most readers of this article). Different considerations apply on the ground – where hatred is far more likely and understandable – but faraway attitudes can have very significant real world consequences. The way we, in the “gallery,” respond to the goings on, impacts the antagonists themselves, pushing them either in the direction of more hatred or less. They care about what we feel – about what “the outside world” feels — and that casts on all of us a big responsibility. Public intellectuals are the ones who matter most, obviously, but, in the wired world, every single one of us is a meaningful contributor, wittingly or otherwise.

It’s an awkward truth to tell but hatred can be wonderful. It’s almost as powerful a force as love, and it’s far less demanding in that there’s no chance of its going unrequited. Being rejected by the object of your love is exquisitely painful, but there’s no comparable risk with the object of your hate. You control your own agenda, in other words.

Hate is galvanizing, and it’s addictive. It’s also terribly destructive though – inside us and out – and I want to believe that most of us know that, intuitively. This then is an appeal, to hate lovers on both sides, to do some serious self examining and to then start expressing themselves a bit more carefully, intelligently, nobly.