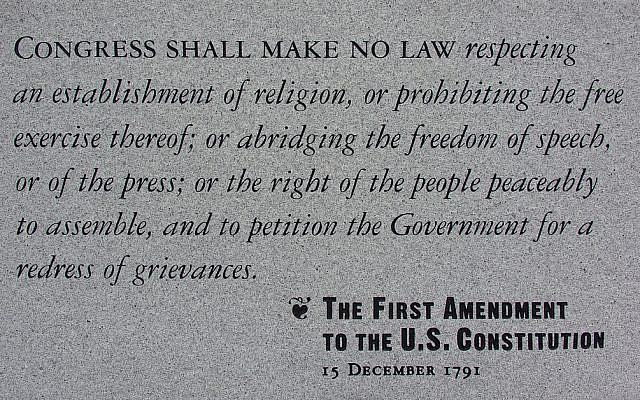 "The First Amendment" by euthman is marked with CC BY-SA 2.0.

The First Amendment is first for a reason: freedom–whether in speech, religion, press, or assembly–is the cornerstone of American identity. The restrictions are few and far between. Short of shouting “Fire!” in a crowded theater, the U.S. allows its populace to express what would be considered hate speech in other industrialized nations with no legal consequences. It’s hardly surprising then, that 2020 saw hate crimes rise to the highest levels in over a decade, with nearly two-thirds “motivated by a bias against race, ethnicity or ancestry,” per FBI estimates.

Obviously, hate speech is not in itself a hate crime, but we cannot deny that the former creates the conditions for the latter. Hate speech is quite literally defined as epithets, slurs, or statements “intended to incite hatred or violence against a group.” The words do not exist in a vacuum, they aren’t verbal filler–they are a direct threat to human rights, the rule of law, and democratic cohesion and coexistence. Hate speech is particularly prominent in times of struggle, as people seek a scapegoat for things such as unemployment, illness, or sudden social shifts. And the onset of a global pandemic definitely qualifies as all three.

We’ve already seen how COVID-19 has driven a surge in anti-Asian hate crimes, with the FBI reporting over 9,000 just last year, but Americans have also leaned into the storied history of anti-Semitism, targeting Jewish people and institutions. Anti-Semitism has even surpassed partisan divides: while conspiracy theories abound about Jewish people manufacturing the disease, earlier this month saw eight schools in Santa Monica defaced with posters claiming Jewish people are behind the anti-vaccine movement.

With the internet at their fingertips, hate speech perpetrators are able to reach users around the world at any time of day. Anonymity makes it easy for users to propel terrorism on social media platforms, in website comments, or on their personal blog posts. Even with community guideline policies on most social media platforms, perpetrators find a way to slip through these policies, especially before their content can ever be reported or discovered by those willing to take it down. In a connected world, perpetrators are able to get away with saying almost anything to any marginalized group overseas.

None of this comes as a shock. Traditionally, hate speech is aimed at already-marginalized groups, and Jewish Americans have consistently been the most targeted religious minority, accounting for over half of all faith-based hate crimes in the FBI’s 2021 annual report. Look at the past five years: the 2018 mass shooting at Pittsburgh’s Tree of Life Synagogue, the 2019 mass shooting at Chabad of Poway in California, or January’s synagogue hostage crisis in Colleyville, Texas. Every time this happens, it’s not just the immediate victims who are affected. Hate crimes impact entire communities, resulting in marginalized groups feeling (rightfully) vulnerable. I could point to similar increases in hate crimes against other marginalized groups: Black Americans, Latinos, Muslims, immigrants, the LGBT community, disabled Americans, the list goes on.

The Trump administration may have made hate speech–and by extension, hate crimes–part of the mainstream, but the impact has persisted long after his term. In 2021, San Francisco reported an over-500% increase in anti-Asian hate crimes. If that’s the state of one of our most liberal and diverse cities, the implications for elsewhere are chilling.

And it’s not just the U.S.–globally, hate speech is on the rise, and violence isn’t far behind. In 2019, vandals defaced a Holocaust memorial and Jewish cemetery in Greece. The next year, attacks grew to encompass more cities, including the capital. The Lopez-Obrador government in Mexico, which has dismissed domestic violence as a serious problem and cut funding to women’s shelters, is facing the resulting surge in femicides. India ended 2021 with a government-funded Islamophobic ad and started the new year with an app targeting Muslim women. Worldwide, hate crimes are threatening our fellows, our social fabric, and our political futures.

The philosopher Karl Popper was likely thinking of his escape from Nazi Germany when he presented his paradox of tolerance. That is to say that any tolerant society, in order to maintain itself, must retain the right to be intolerant of intolerance. Freedom is a human right, but only insofar as it does not infringe on other human rights–including human life. Freedom of speech is no different.

But even as we accept that hate speech should be regulated, the exact method to do so proves tricky. The UN Office on Genocide Prevention and the Responsibility to Protect doesn’t have a clear answer, but it does have four guidelines for any such policy: that it preserves freedom of expression, that it become a mutual responsibility across all sectors of society, that it include the digital landscape, and that it feature constant data collection and research to evolve alongside the problem.

My dear friend and colleague, Rabbi Abraham Cooper, the associate dean and director of Global Social Action Agenda for the Simon Wiesenthal Center, has a history of fighting digital terrorism through the Center. “The idea of online hate and terror posing a danger is not an abstraction,” Rabbi Cooper said during the 2019 release of the Digital Terrorism and Hate Report Card. “We’ve seen the impact foreign terrorist groups who use the Internet to spread their messages of hate and to organize. Now we’ve seen the model replicated in the U.S. to tragic effect.”

Liberal democracies such as Canada, France, Germany, and New Zealand all have laws designed to curtail hate speech, and yet every single one of them currently outscores the U.S. in the latest Freedom Index detailing political and civil liberties. The Supreme Court acknowledged the destructive nature of hate speech in 2017’s Matal v. Tam case, but that same ruling ultimately decided that the aforementioned destructive force falls within the bounds of the First Amendment. And so we’re in for the long haul of social and legal reforms. Because as long as hate speech is protected, its victims are not. Victims of hate speech deserve to be protected, but for now we will continue to see how protecting hate speech will play out.