The Blogs
Reuven Bobby Weinmann
Apply for a Blog
Advertisement
Please note that the posts on The Blogs are contributed by third parties. The opinions, facts and any media content in them are presented solely by the authors, and neither The Times of Israel nor its partners assume any responsibility for them. Please contact us in case of abuse. In case of abuse,
Report this post. 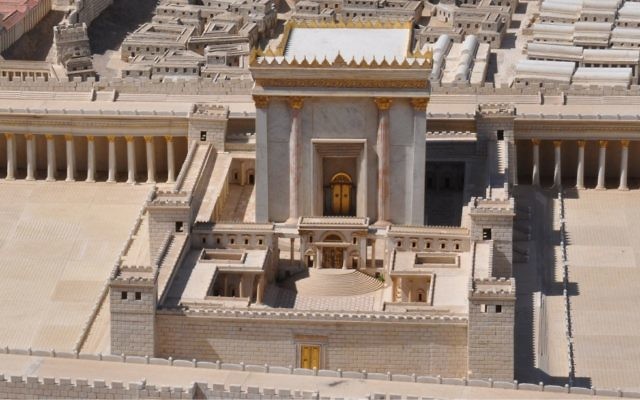 Just over the “hill” — known as the Mount of Olives — from my house, sit the remains of the Second Temple. Every year at this time, we fast and mourn its destruction, and pray that the pesky dome is removed and a Third Temple is built. Every year, we review the odd story of “sinat chinam” (“free” hatred between Jews) involving “Kamtza and Bar Kamtza,” which the Babylonian Talmud tells us in Gittin 56a. But are we understanding it correctly?

Every year, I make it a point to listen to Rabbi Shmuel Irons, The History of the Hatred that Destroyed the Beit Hamikdash. I don’t know if it’s still available on the internet, but if it is, it’s well worth it. Most of the information below comes from that class.

The story: A host — oddly unnamed, so I’ll call him Sheldon — throws a party, to which he invites the leading Sages of his time and his ol’ buddy Kamtza. Except, Kamtza’s invitation is mistakenly delivered to Sheldon’s enemy, Bar Kamtza. What can you do?… Israeli Post Office. Surprisingly, Bar Kamtza shows up — as opposed to just sending a gift. Sheldon demands he leave, but Bar Kamtza is embarassed to get kicked out like some drunk guy at a club at 2 a.m. (not that I’d know). Bar Kamtza tries to negotiate, eventually offering to pay for the entire shindig, if he’s allowed to stay, but he isn’t. Ticked at both Sheldon, and the Sages who didn’t stick up for him, Bar Kamtza slanders the entire Jewish community to the emporer who — skipping ahead — is convinced the Jews are rebelling and decides to destroy Jerusalem and the Temple.

Rabbi Irons suggests that Bar Kamtza was… wait for it… a Sadducee (Tzeduki). Sadducees were THE heretics of the Second Temple era. They were the inheritors of the mityavnim (Jews who supported the Greeks from the Chanukah episode). They supported the Roman government, denied the Oral Torah and the afterlife, and were locked in a constant battle with the Pharisees (the aforementioned Sages).

Now, everything makes sense. Sheldon is “Orthodox” and supports the Sages. Bar Kamtza is the exact opposite. Of course, Sheldon wants to kick him out, and of course the Sages didn’t object, because he represented the antithesis of everything they stood for. They are principled men and won’t compromise their values, no matter how much Bar Kamtza’s paying. Finally, Josephus tells us the Sadducees were known for is being in cahoots with the non-Jewish government. So of course, if you’re a Sadducee and you want revenge, that’s where you go. Everyone acted exactly as they’d be expected to, and it ended in disaster.

Rabbi Irons has an interpretation of what sinat chinam means, but I’d like to propose my own. Sinat chinam may mean the “hatred for which I’ll pay no price.” I can hate — probably should hate — this person and who would blame me? Just look what he is.

What’s amazing is that the Babylonian Talmud was written by the disciples of the Sages — albeit in a later generation — and they’re saying, “We were completely wrong.” They should have leapt to the defense of a Sadducee. Not that they should have stopped opposing his beliefs and actions — in that they were 100% right — but this wasn’t about those. One can’t allow oneself to let disgust of an idea carry over into personal hatred. Instead, you have to “love your fellow Jew as yourself.”

In yeshiva, the example they gave us was arguing with your study partner over what Rashi means. If Bar Kamtza was a Sadducee, then that would be laughable.

What it really means is, if you’re in the Orthodox camp, you have to love the Women of the Wall, Reform rabbis and Meretz MKs and those who sell pork chops in Jerusalem. Ouch.

If you’re a peacenik, you have to love us settlers. Hug a Kahanist.

If you’re a Zionist, say nice things about Satmar.

If you are a Satmar, tell yourself, “That woman in a miniskirt is my sister and I need to be concerned for her welfare.”

If you supported Hillary (or Bernie), send a note to wish the Kushners well. Or the opposite.

Remember, they may be wrong, misguided, and perhaps even dangerous, but Moshe Rabbenu even tried to save Datan and Aviram. We may have to oppose and try to stop “their” ideas and actions (whoever the “they” is), but we have to be careful about we treat “them.”

I’ll admit this is hard for me. Being ba’al teshuvah, I can easily relate to non-religious Jews. Israeli Haredim, on the other hand… It’s often hard to imagine we’re the same religion. But that’s the challenge, and if it were easy, we wouldn’t be fasting, would we?

May we merit the rebuilding of the Temple soon. If not this year, have an easy fast.

About the Author
Reuven (sometimes Bobby) came from a mixed Jewish-Christian background. He became ba'al teshuva (Jewishly observant) in his 20s with the intention of making aliyah, which didn't happen until his 40s. His daughter, Shani, also blogs and serves in the IDF as a medic. She was a lone soldier until her parents made aliyah in 2017.
Comments