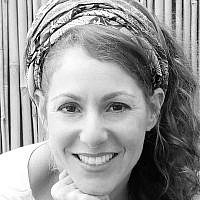 The Blogs
Yael Harris Resnick
Apply for a Blog
Please note that the posts on The Blogs are contributed by third parties. The opinions, facts and any media content in them are presented solely by the authors, and neither The Times of Israel nor its partners assume any responsibility for them. Please contact us in case of abuse. In case of abuse,
Report this post. 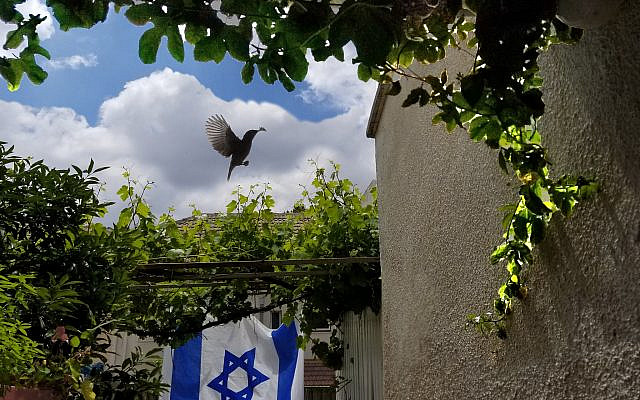 A hummingbird builds her nest at the entrance of the Resnick home during quarantine.

A few weeks back, when we were deep in the depths of quarantine despair, the kids reminded me how back in the US  when we homeschooled by choice we would order a butterfly kit online each spring. Little caterpillar eggs would come straight to our door in the mail and over the course of 6-8 weeks we would nurture them and watch the miracle of metamorphosis.

There is something about watching life happen before your eyes that inspires wonder and appreciation in a way like no other. It encourages a contagious hope and positivity in your soul.

With live creatures not allowed in the mail here in Israel (not to mention the delayed shipping times), I prayed for a caterpillar to find its way into our lives naturally. We have a garden and we have many butterflies flying about. It was day far not one of my strangest prayers.

To my surprise and delight we were sent something even better. Overnight, a hummingbird couple had started building a nest in the passionfruit vine right by our front door. For days we watched them gather feathers and twigs. For weeks we observed as the female sat in the nest and the male fluttered close by. We became sensitive to how we opened the front door (and tried not to slam it closed) and whispered when we entered and exited. We didn’t want to scare them away. They became part of the family.

We named them: Quarantina (Tina) and Bidudu (Dudu is a nickname for David in Israel and Bidud means quarantine).

They were a positive distraction and symbol of hope as a plague festered outside the safety of our home. While we waited patiently for the curve to flatten and for Tina to lay her eggs, we looked forward to new life on the other side of this nightmare: a more sensitive world filled with renewed priorities, the environmental benefits of less travel and production and people appreciating their time spent outside the confines of an office or classroom. After so much isolation, how could there not be more compassion, love, peace and harmony on Earth?

We had envisioned a positive outcome to this terrible time and that was enough to keep us content despite the challenges of being confined.

Then, one night, out of nowhere there was a storm. We awoke in the morning to the inevitable: a torn vine and the sad sight of a fallen branch, barely holding the nest securely. Tina and Dudu were not there.

We waited all day. No sign of them. My heart didn’t want to let go. For days we waited and watched. They didn’t return.

A few days later Israel opened up on restrictions. I was anxious to rejoin society. What would it be like to transition back to normalcy after months of being inside and isolated? Surely the well-rested world we had envisioned would welcome us with open arms.

I was disappointed and deeply troubled to see that the world was the same as before. Maybe even worse. Rudeness. Judging. People arguing about social distancing rules. Inconsiderate drivers cutting people off, crossing lanes illegally, honking horns. Two cranky neighbors called the police on us for petty things instead of talking to us. Litter on the streets. Impatience. Anger. Hostility. Blame.

Meanwhile, our birds didn’t return. I cried. For them. For us. For the world. For sickness and storms and hate and intolerance.

Had we not learned anything? All this time alone to think about our actions and we return even more audacious and defiant than before? The painful realization of that was almost too much to bear.

Because I am human I think in extremes. Seeing all the negative things almost made me forget the good. All the helpers and heroes, kindness, support and solidarity that we have seen in the world through the thick of every crisis and especially this one.

Yesterday morning my son yelled to me, “Do you hear that chirping? It’s Tina and Dudu!” We ran outside. We saw two hummingbirds collecting feathers and twine. Then we watched as they flew over the rooftops.

It was probably a different pair of birds. I’d like to think it was our Tina and Dudu, immediately rebuilding once again, despite the trauma and injustice they suffered.

There will always be storms. That’s the nature of the world. The world is an unstable, scary place. There will probably always be hatred, intolerance and pain. That’s human nature.

But there is also always hope. There is always goodness and kindness and the choice to make a positive difference.

We missed out on seeing our little hummingbirds build their family but they taught us an even bigger lesson than we originally thought they would. Don’t stick around and wallow in the negative. Take every storm and allow it to inspire you toward making a change for the good.

“I may feel insignificant, but I don’t want to be like the other animals watching the planet go down the drain. I’ll be the hummingbird, I’ll do the best I can.” — Wangari Maathai

About the Author
Yael Harris Resnick made Aliyah from Los Angeles 7 years ago and lives in Ginot Shomron with her husband, Benjamin and their 4 children. She's a multi media artist, most well known for her biblical women and Israel themed artwork and for producing ArtTrivet: decorative Judaic table runners. She enjoys finding the humor and irony in everyday life and believes that stories can inspire, entertain, and help others.
Related Topics
Related Posts
Comments