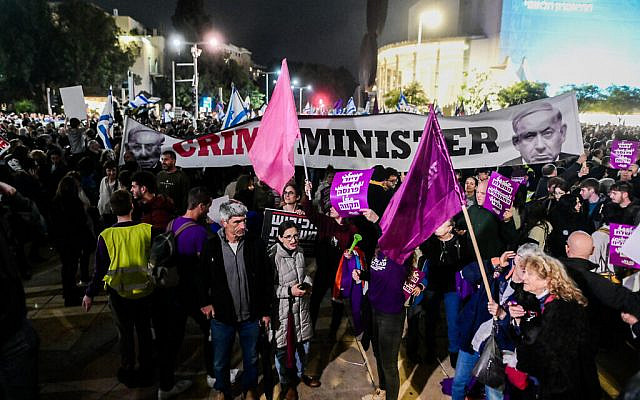 During the 1993 Oslo Peace Accord negotiations, a hot-headed congregant slapped the Rabbi of a Modern Orthodox suburban New Jersey synagogue. The congregant’s action was then justified by a fanatical local newspaper opposed to the rabbi’s views, stating: “The rabbi deserved it,” referring to the rabbi’s support of the Israeli government. All the rabbi had said at the time was: “The Israeli government knows better than us what is best for Israel.”

I’m reminded of this incident by the current stream of virulent statements against the newly elected Israeli government, claiming that it is undemocratic and must be brought down. One rabbi on the Upper West Side in NYC went as far as stating that he would no longer recite the weekly prayer for the well-being of the state of Israel.

I see this as an example of ‘liberal militancy’, a phrase I coined years ago when friends on the left side of the political spectrum refused to talk to me after I dared question their blind support of President Obama, whom I had voted for as well.

Growing up in Israel during the 1960s and ‘70s, I witnessed much political upheaval and arguments between the right and left. I recall when Menachem Begin was elected Prime Minister in 1977, and Labor supporters (mostly centrist left) thought it was the end of Israel as they knew it. Yet their language was restrained, relative to the vicious and toxic tone that would creep into the political discourse in later years. Ironically, it was Begin who brought about the peace accord with Egypt, after which the country aligned itself behind his leadership. Tragically, our subsequent internal fighting led to incitement and division in the country, causing Rabin’s unimaginable assassination.

Division in Israeli society has once again reached a dangerous level, and I wonder how the same left-leaning lovers of Israel can justify their inflammatory speech today without worrying about a recurrence of past events. Jewish history is loaded with examples of hate among rivaling groups that led to disastrous outcomes, still we have not learned our lesson.

It is in times like these, a closer look at Menachem Begin’s leadership style is helpful to learn how to maintain unity even in harsh times. Begin in the 1940s, as head of the Irgun military organization, refused to retaliate against the Haganah for the betrayal of their fighters (to the British). Additionally, in 1948 he demonstrated enormous self-control after the sinking of the Irgun ship, the Altalena, by Rabin’s authorization. The restraint he showed was inspired by his unwavering commitment to a unified future Israel; a future which, sadly, is being betrayed by today’s politicians and their supporters.

I do not support some of the politicians in this government, but I find it hubris to believe that our views are the only correct ones or to feel justified in vilifying a democratically-elected government. Ironically, it was fair play for the left to support the recent coalition which relied on Arab parties, some of which were opposed to the State of Israel, yet they went on to rally against the current government’s reliance on a right-wing Jewish party for its coalition. This seems to be the utmost hypocrisy. Add to this, anti-Israel extremists are riding on the coattails of the current unrest. At least two signs at the protest in Israel at Saturday evening included Nazi references. One portrayed Justice Minister Levin with a symbol of the Nazi SS, and another compared the government to the Third Reich. With Gantz threatening ‘Civil-War’ and urging mass protests to ‘make the country tremble’, we’re joining a new climate of global insurrection.

When Trump lost the recent election, many were rightfully enraged by election deniers. Similarly, claims that this government is not a democratic one – although it won a decisive majority – are disingenuous to say the least. Voters knew the record of the people running, and still they voted them in.

Finally, let’s reflect on the backdrop to these election results. Not only are we in a state of war, but we’re also in the midst of an escalation of terror acts following years of appeasement and false hope that the Palestinians would finally find their way to coexistence. The ‘moderate’ Palestinian Authority is fueling what they hope would be a new intifada, still the left seeks more concession. The arguments against their grim reality of life within walls and roadblocks ignores the fact that this is the result of years of terror inflicted on innocent Israelis.

I believe that Netanyahu should have opened the door to a new generation of leadership in the Likud, and I disagree with the politics of Ben-Gvir and Smotrich, but I believe in the integrity of Israel’s political system, and I don’t see myself as superior to Israeli voters.

If we look closely at history, we’d see that governmental policies and elections often swing back and forth, reaction and counter-reaction, acting in response to previous ruling governments. A left-leaning regime leads to the election of a right-wing one, with policies switching direction to extreme left and right as neither obtain the desired results. Nixon’s term led to Carter, Reagan and Bush brought us to Clinton, Bush led to Obama, Obama to Trump and back to Biden; it’s a never-ending pendulum of unmet expectations. The media amplifies the loudest complaints from the street, and leaders play up to the loud minority that highjacks the political process. It’s naïve, at best, to assume that either trend would generate the results we want, and still, we give in to radical voices.

Let’s stop this madness and allow the duly elected government to follow its mandate. We should use our voices to argue our cases within our given channels of communication in the right forums, whether it is against changes to new court protocols or to policies we object to, but let’s stop the incitement.

Finally, I think that diaspora Jews in general, and our rabbis and leaders in particular, would do well to lead their flocks toward patience, tolerance and constructive advocacy. Virulent expressions don’t solve problems—they just create bigger ones.

About the Author
Soli now lives in the US, but he was born in Romania and later lived in Israeli boarding school Hadasim, as part of the Aliyat Hanoar. He served in the Israeli Air Force, and graduated with a degree in architecture from the Technion. After settling in Jaffa, he moved to the US and had several businesses. He has been married for 40 years, and is the father of 4 and grandfather of 7.
Related Topics
Related Posts
Soli Foger