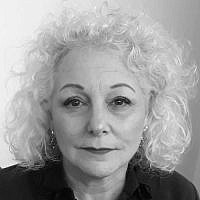 The Blogs
Ellin Yassky
Apply for a Blog
Please note that the posts on The Blogs are contributed by third parties. The opinions, facts and any media content in them are presented solely by the authors, and neither The Times of Israel nor its partners assume any responsibility for them. Please contact us in case of abuse. In case of abuse,
Report this post.

Walking home today, I was stopped on my street by the sight of the neighborhood hedgehog wobbling about the sidewalk in a drunken circle. Leaning against a low wall of a neighboring yard, another woman had stopped as well. At first, I thought she was also enjoying the serendipity of coming across this sweet little animal. But we both quickly agreed that this creature was in distress. Was he hurt or simply taking his last steps after a long hedgehogian life? Hedgehogs are primarily nocturnal — a solid clue. It was at that moment, when we both looked at each other, sizing up whether either of us was going to put our plans on hold and help this little animal, that another unique, “only in Israel” story began to unfold. 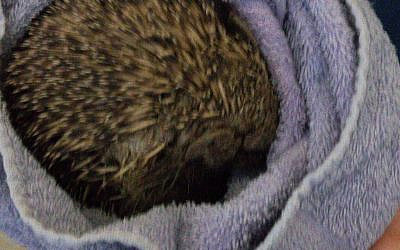 I could feel his tiny heart beating furiously.

I made Aliyah in 2012 and have, since my first four years living and working with abused and abandoned children in a foster home in Afula, scrutinized my new world and adopted country through a very fractured and critical lens. I can’t help but weigh every situation in terms of how it would have played out in New York (although I doubt there are many urban hedgehogs wandering the streets and broad avenues of the Big Apple). I don’t compare these situations so much as, “Well! In New York, we would have done it THIS way!” as I do, “Go figure! This would NEVER have happened in NYC!” I wonder, relish, and revel in the differences. I don’t want to live a transposed NYC life in Israel. I much prefer the unexpected, exotic, often frustrating, and at times direct ways things are handled here. No artifice. Just real.

But the great equalizer, Hebrew fluency, is woefully absent in my life. Even after 4 levels of ulpan, I still find myself paralyzed when faced with a situation wherein the requisite vocabulary and its proper conjugations are nowhere to be found in the jumble that has become my American-Israeli brain. I ridiculously jump back to my default second language of Italian or struggle through a painful, hacking foray into remnants of my high school and college French, held captive to the spiderweb-like traps that have taken up residence in my brain.

And here we return to the Israel story. This trim, young, fashionable woman incongruously dragging two motorcycle helmets, became my partner in this urban wildlife rescue. With its tiny heart pounding in fear, this little thing, who by now was nestled in my gym towel and protectively cradled in my arms, had become my charge and responsibility. In for a penny, right? “Who should we call?” she asked in Hebrew. “Call 106, the city hall,” I answered, amazed that I even knew such a useful piece of information. “My Hebrew is too weak,” I demurred. “Could you please do it?” She nodded with a gentle smile, then proceeded to make a succession of phone calls and texts: first to the city hall, then to Teva, the wildlife organization, who promised to get back to us. But honestly, how many volunteers are actually waiting by their phones so they can spring into action on a Friday afternoon to rescue a very sick, smelly, and spiny rodent who, it soon became evident, was covered in scabies? “Let’s take it to the closest vet,” we both agreed. “Maybe Teva will get back to us and we can leave it in the care of the vet until then. But first,  could you please help drop off my shopping bags at my apartment down the street? I can’t bring this hedgehog into my apartment – the dog would go nuts.” “Sure!” she answered.  And there we were. Two strangers. Meeting by happenstance, hell-bent to rescue this little creature, whose labored breathing had been replaced by little heartbreaking, hedgehog peeps. It was in my arms now, and I had to see it through. Abandoning it in a yard or placing it under a shrub to fall prey to the feral felines that rule Tel Aviv was not an option. For better or worse, I had to see this through.

And finally, after realizing that the first vet wouldn’t help, I carried this little bundle to my vet, knowing that they would either transport it to Teva or would mercifully send it on his way to hedgehog heaven. I said goodbye to this lovely young woman on Ibn Gavirol after we departed, heavy-heartedly, from the first vet so that I could walk a mile to the second, and we shared a hug between strangers. This sort of stranger-bonding has only happened to me in Israel, a country where many strangers run, unselfishly and without forethought, to the aid of one another. In these instances, there is no need for any fluent or shared vocabulary. For me, this was one of the true Israel stories seized upon with the singular view of someone who all-too-often evaluates their new world through a critical, Aliyah lens.

Nothing happens in my life haphazardly, I am sure. This hedgehog adventure weighed heavily on my heart (I still don’t know this little creature’s end story) until I realized that (coincidentally?) today would have been my mother’s birthday as well as the day we buried her, 33 years ago. Hers was a life dedicated to helping anyone who got a raw deal. She purposefully sought out the downtrodden, if only to give them a brief respite and a reminder that they were not alone in this world. She, the creator of the moral compass that rules my life and occasionally pushes me to tend to smelly, injured creatures. They say that you should do a mitzvah in the memory of someone you loved. For better or worse, this little creature provided the opportunity for me to do just that. Mom, I hope it met with your approval.

About the Author
Ellin Yassky is a Tel Aviv resident who made Aliyah in 2012 from New York to Afula (because isn't that how everyone makes Aliyah?). After 30 years of producing and editing art books, it was time for a complete re-boot. Since her arrival, she has worked as a development professional at various non-profits, delving deep into the non-touristy aspect of Israel.
Related Topics
Related Posts
Comments