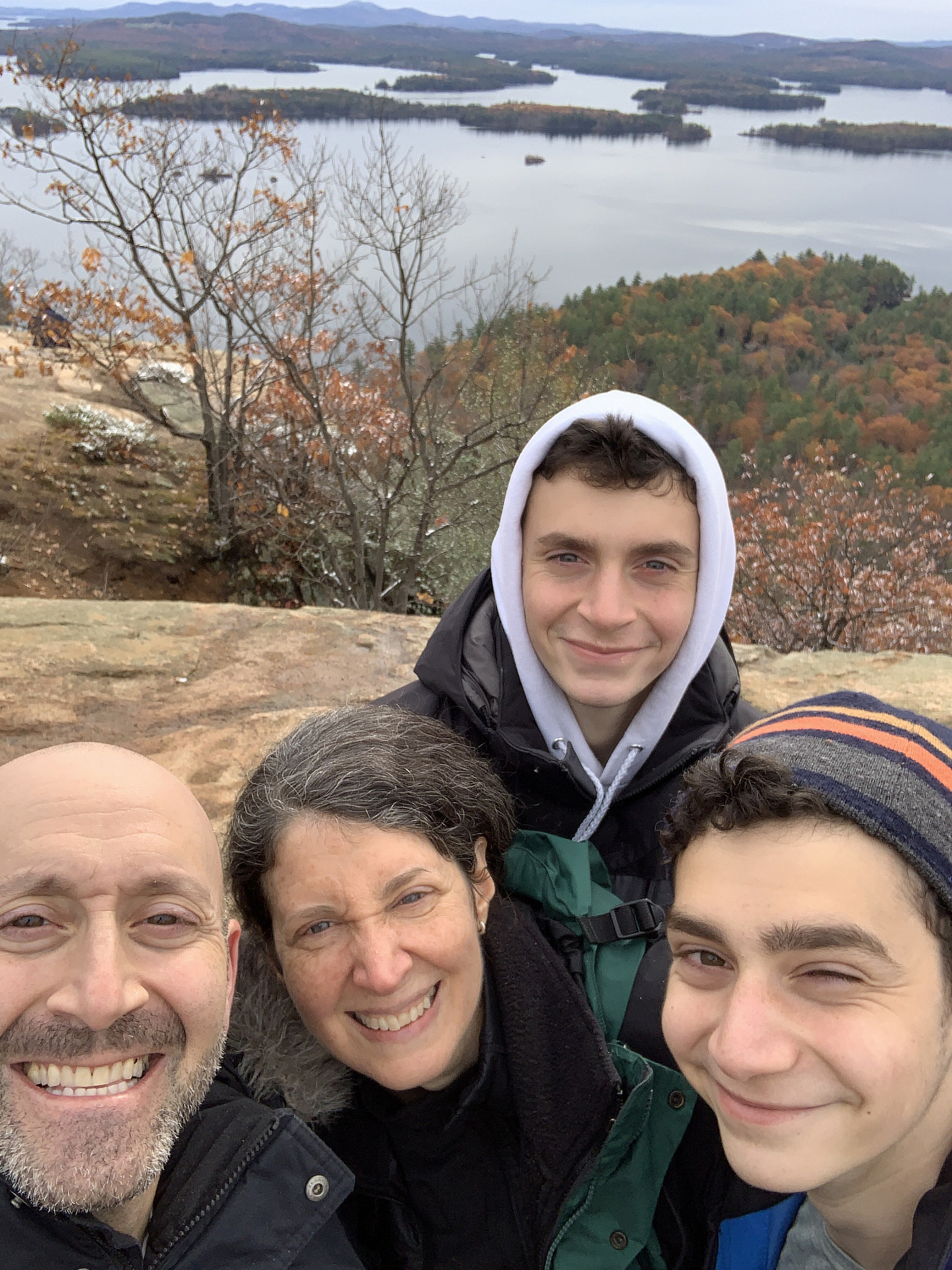 Last Shabbat I got to get away with my boys and Sharon and over the weekend I was thinking back to when my kids were younger.

Thirteen years ago, Sharon and I had our hands full with three kids under the age of 6. Amidst the sleep deprivation and all those diaper changes, I remember thinking, this is going to get much easier when our kids are older.

Well, fast forward all these years, and the years do go by quickly, and while I do not have the same responsibilities as the parents of young children, I have to say, it’s not easier; if anything, it’s harder.

Trying to deal with screen time amidst a pandemic is no piece of cake and the complexities of the issues that teens and their parents face these days are really not easy.

That said, having teens who are thoughtful, compassionate, and who teach me each day how to be a better person is the most amazing gift I could ever ask for.

They debate me and challenge and help me refine my thinking on so many issues. Nowadays, they even recommend books, movies, and TV shows for me.

Recently, Matan, my thirteen-year-old, asked me to read a book he just finished. So, I started this amazing book: Humankind: A Hopeful History by Rutger Bregman. While I have not finished it, I am already blown away by this book and how it takes down the cynical view that beings are fundamentally selfish and unkind.

He opens the book with an amazing example from World War II which is worth sharing. In order to defeat Britain, Adolf Hitler, yimah sh’mo, may his name be erased, began a bombing campaign called the Blitz. It was predicated upon an idea that if the British population broke under the terror of his bombers, it would bring about bedlam and pandemonium among the British people. Then Britain would surrender.

Even Britain’s great Prime Minister, Winston Churchill believed that this would work and that three to four million Londoners would flee the capital under the strain.

This strategy was based on a book published in 1895 by the French thinker Gustave Le Bon entitled: The Psychology of the Masses which claimed that people respond poorly in a crisis.

As soon as a crisis occurs, Le Bon wrote people “descend[s] several rungs in the ladder of civilization.” Once people panic, violence ensues and society degrades into chaos.

Bregman relates that Hitler briefed his generals on October 19, 1939 about his plan: the Luftwaffe – the German air force – would mercilessly bomb London and the population would panic, hide in the shelters, never to emerge.

Almost a year later, on Saturday, September 7, 1940, 348 bombers crossed the Channel; it was a beautiful day and many Londoners were out enjoying it. At 4:43 PM, the sirens sounded and everyone looked to the sky to see the planes drop their first bombs. It became known as Black Saturday and more than 80,000 bombs would be dropped on the city throughout the next nine months during what would be called the Blitz.

Entire neighborhoods were wiped out. 40,000 people were killed. But Bregman points out that people did not get hysterical; they did not descend into inhumanity. He cites the eyewitness of Dr. John MaCurdy, a Canadian psychiatrist who drove through a poor neighborhood that was devastated by the relentless bombing.

“All that remained was a patchwork of craters and crumbling buildings. If there was one place sure to be in the grip of pandemonium, this was it.

“So what did the doctor find, moments after an air raid alarm? ‘Small boys continued to play all over the pavement, shoppers went on haggling, a policeman directed traffic in majestic boredom and the bicyclists defied death and the traffic laws. No one, as far as I could see, even looked into the sky.’” 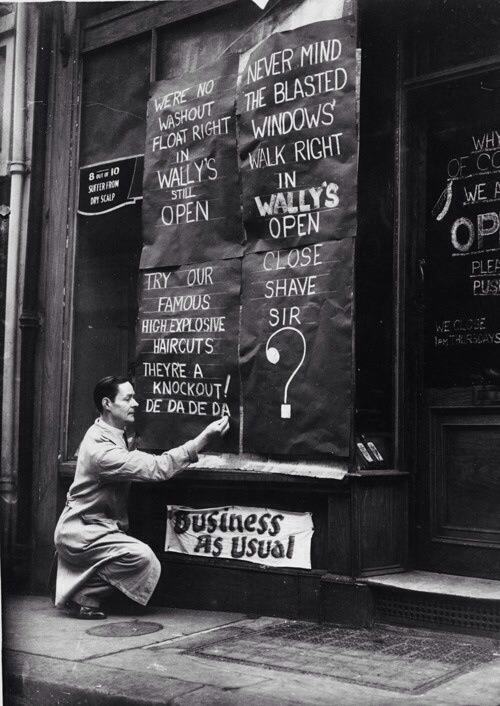 “Evidently, Hitler had forgotten to account for one thing: the quintessential British character. The stiff upper lip. The wry humour, as expressed by shop owners who posted signs in front of their wrecked premises announcing: MORE OPEN THAN USUAL. Or the pub proprietor who in the midst of the devastation advertised: OUR WINDOWS ARE GONE, BUT OUR SPIRITS ARE EXCELLENT. COME IN AND TRY THEM.

“Within weeks after the Germans launched their bombing campaign, updates were being reported, much like the weather: ‘Very blitzy tonight.’ […]”

The mental toll did not materialize as public mental health actually improved. Alcoholism tailed off. There were fewer suicides than in peacetime. British society actually became stronger in the face of the Blitz.

Bregman argues that people are fundamentally good, even in the face of unbelievable challenges.

But there are two key points that I want to make. 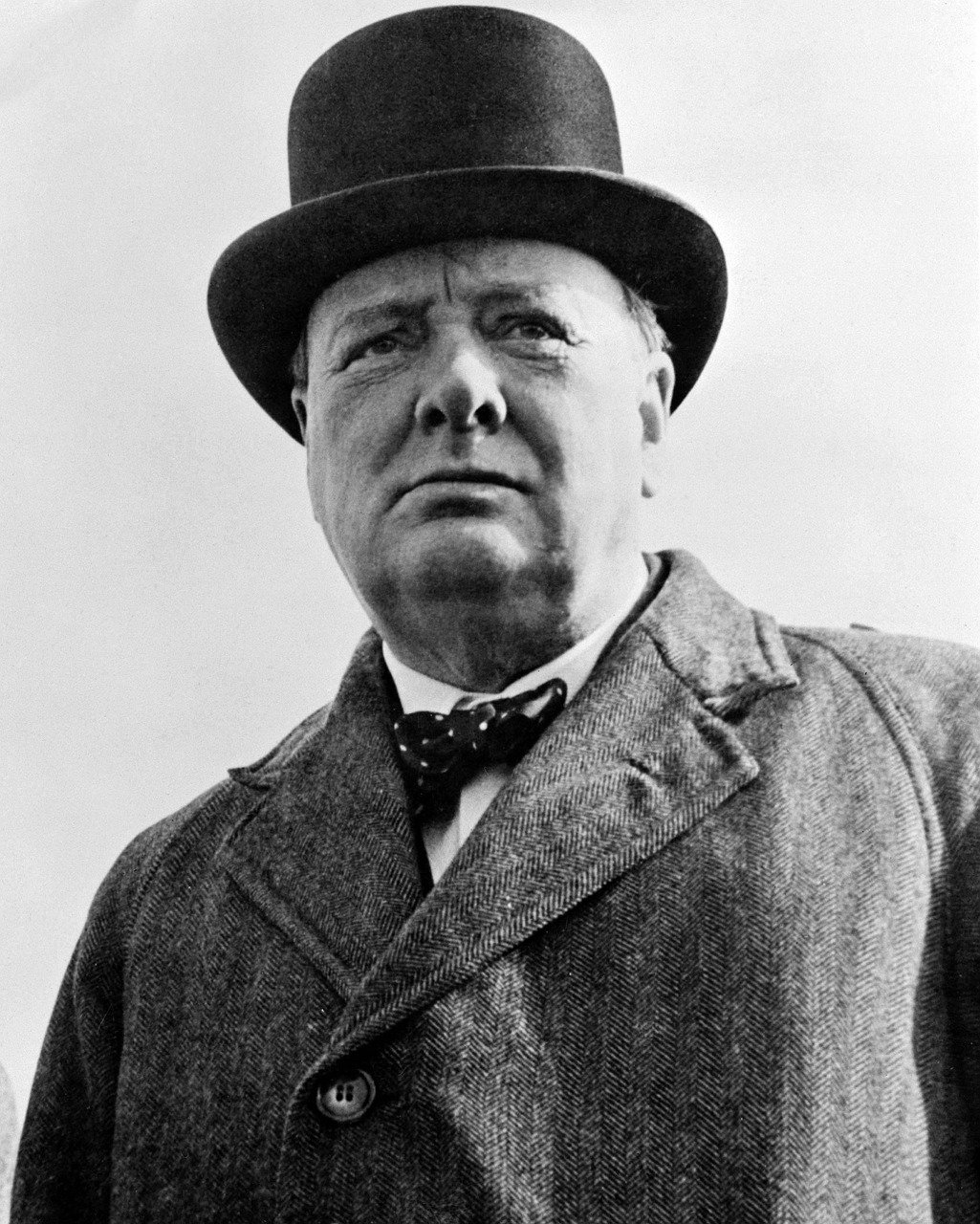 First, Britain had a strong, moral, clear, and compassionate leader in Winston Churchill. We have been lacking that.

And, they were united in the face of a common enemy: the Nazis.

Today, we are living in challenging times: we have a deadly, contagious pandemic that has taken the lives of almost 240,000 American lives.

If we had done what they did, and you extrapolate that to our much larger population, there would still be fewer than 2,500 deaths. If we had followed less strict guidelines, but much better than what we have done and followed Australia, a society more like our own, we would have 11,000 deaths. That means that some 230,000 people died unnecessarily.

That is most tragic. Inexcusable. Horrible.

Our country is divided between those who believe in science and those who seem not to; those who are willing to take basic preventive measures like wearing masks and those who do not.

The election has sharpened this divide – this is a country that is split between urban and rural dwellers. I could see that last weekend driving around the middle of New Hampshire, but let us find ways to listen to each other and come together. Let us see this as a moment of change. A moment of hope. A moment of opportunity.

Parashat Va-Yera is filled with moral messages and acts of kindness.

I want to hone in on one episode that I think offers us a guide for this moment. The Torah states: V’hu yosheiv petah ha-ohel k’hom ha-yom – Avraham was sitting at the entrance of the tent in the heat of the day. (Genesis 18:1)

So Avraham could see if anyone was passing so he could invite them in for some water, food and take care of them. He went out of his way k’hom hayom – in the midday heat in the desert.

And that’s just what Abraham and Sarah do as they quickly care for their three visitors as they serve them a hastily prepared, but delicious meal.

This is simple kindness.

This is welcoming strangers.

This is not caring about if your guests are different from you.

If they hold a different political opinion.

If there are immigrants.

If they are from a different place or country. It did not matter to Avraham.

It is a simple, common decency.

It is something we should all practice.

It is something that was woven into the fabric of this country, but the fabric is worn; it’s a bit tattered and torn in places.

We have let people trample all over it and stomp on it. We have watched our civil discourse Twitter away as social media has eaten away at the way we communicate. We have lost some of the basic norms of how our government should act.

We lost sight of our model of Avraham, sitting in the heat of the day not caring about which party you align with, the color of your skin, the car you drive, or if you are an urban or rural dweller.

We have lost our way a little bit.

But, we can find our way back.

Hillel reminds us that the whole Torah can be summarized by the Torah’s central teaching: “V’ahavta L’reiakha Kamokha – love your neighbor as yourself” (Lev 19:18) a seemingly simple commandment, but one which is actually not so easy.

Rabbi Isaac Luria the great 16th century Kabbalist realized it was hard to do this and gave us a tool to help make this stick – he inserted the following formula into the morning service: “Hareinee mekabel/et alai mitzvat haBorei: V’Ahavta L’reiakha kamokha – I hereby accept the obligation of fulfilling the Creator’s mitzvah as it is written in the Torah: ‘Love your neighbor as yourself.’”

Start by reciting this.

Start each morning with this verbal intention and then try to practice it.

First, love yourself – not always easy. Then bring some love to another person. Someone around you. And then keep widening your circle, your tent.

Maybe we can be more like Abraham. Imagine then what our country could be like once again.

It’s time for our country to start healing and coming together. After all the divisiveness of the last four years and of this election, it’s time to stop.

And start with kindness.

Let us remember that while this, in some ways, is a harder challenge than the Blitz since it is not from an external enemy like the Nazis, it is an invisible virus and divisiveness and hatred and internal discord and disagreements about basic truths and facts and these are truly hard to overcome.

Let us begin with basic kindness.

Let us begin by remembering that people are fundamentally good.

Everyone has a divine spark of light, of goodness within them.

The leader we have chosen for this moment we hope will provide the kind of leadership that Winston Churchill did – calm and compassionate, reasonable and reasoned. He will set out to tackle Covid and to unify the country for all its people. 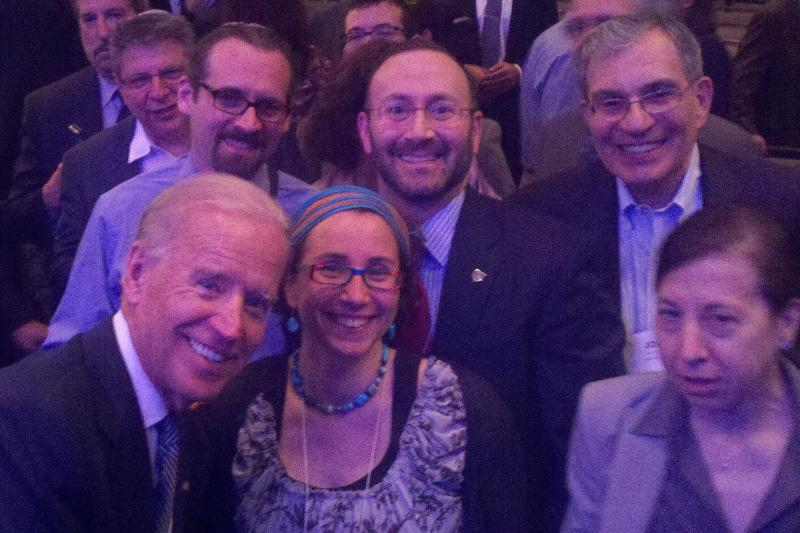 Rabbi David Lerner (center) with other rabbis and President-Elect Joe Biden at the 2012 Rabbinical Assembly Convention in Atlanta, GA (Courtesy of Rabbi Lerner)

Let us all come together to support our great country in its time of need.