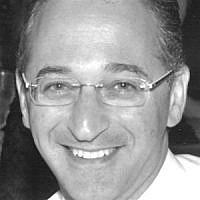 The Blogs
Nigel A. Spier
Apply for a Blog
Advertisement
Please note that the posts on The Blogs are contributed by third parties. The opinions, facts and any media content in them are presented solely by the authors, and neither The Times of Israel nor its partners assume any responsibility for them. Please contact us in case of abuse. In case of abuse,
Report this post.

We must choose. To exercise our free will is not only a civic duty as part of a democratic society, but is in fact the very essence of what it is to be a Jew. And so, as I suspect many of us thoughtful and as yet perhaps somewhat undecided voters do these days, I was channel surfing the other night, looking for that final nugget of insight that will help “seal the deal” one way or another with some measure of integrity to justify our choice as we go to the polls.

As it happened, I landed on Fox at just the moment when Megyn Kelly was interviewing Newt Gingrich and watched what seemed to me like the unraveling of a political activist who knew his side was losing. Plainly speaking, Gingrich, a well respected and revered conservative thinker, known almost as much for his detached persuasiveness as his intellect, was coming unhinged. Kelly seemed to have clearly touched a nerve. In typical fashion over the next 24-48 hours, the media seized on the drama and has been reporting various perspectives on what triggered the meltdown.

Oddly enough, however, I now see numerous comments online and in social media, citing the non-“lame-stream” media version of events cheering the “Megyn Kelly ‘Smackdown’ by Newt,” as evidence to support that their side is winning. And I think to myself, this is (what in the medical world is called) the pathognomonic sign of our disease. Newt exploded before even giving Kelly a chance to finish her question. He didn’t hear the critical “IF” that prefaced the hypothetical soft ball she was trying to give him. In short, we are just not listening anymore. And I don’t just mean to each other. In some cases, we are not even listening to ourselves.

Many of the comments, which I’m sure many of you have also seen, generally run along the lines of “I’m done with Megyn Kelly” and “I’m sick of Fox News and the mainstream media.” I think we can all recognize that something is seriously wrong when even “Fair and Balanced” Fox News is now lumped in with the “lame-stream media” and is considered part of “the liberal conspiracy”. I will admit, I too have been openly critical of media bias. It is a real problem. But perhaps worse than bias, is the dereliction of duty to pursue the truth. Most “news” outlets now have completely abdicated that sacred trust for the sake of stirring controversy and generating ratings. The hardnosed reporting and tough follow up question that characterized once venerated endeavors as the The Washington Post, New York Times and the investigative journalism of 60 Minutes in the 70s, are now no more than interesting relics on display at the Washington Newseum. And in the meantime, our democracy has been severely eroded and has become, as the politically correct police might say “intellectually challenged.”

How long will Republicans continue to cling to the idea that the world is flat? How long will Democrats deny the existence of boundaries? No wonder there is such a deplorable state of dysfunction in our democracy. As soon as someone tells us all we’ve had too much candy, we cover our ears and scream like a bunch of 2-year-olds. In the particular example I presented here, Megyn Kelly is clearly not the problem. The candidate is. “The fault…lies not among the stars…”

Republicans probably have never had a better chance to run the table in an election. They have the most vulnerable, flawed opponent you could have wanted to run against. They have millions of disaffected and independent voters, many formerly registered Democrats like myself, unhappy with Obama and disappointed over Romney’s delayed enlightenment, that would have happily cheered the Republican ticket. And who did they pick to be the standard bearer? A second rate con man who’s more famous for tearing people down than building anything that was valued for more than his name, offers no substance, and is supported feverishly by some who view our election simply as way to vote people they don’t like “off the island.” He exploited their anger and fears and made the GOP his biggest mark, in the process destroying the Republican Party and true conservatism. He just grabbed and kissed them all without asking. But they didn’t even notice because, after all, he just swallowed a Fox News flavored Tic Tac that they all thought made him “refreshing”. Much like him, they have lost sight of what’s really important and have substituted love of “winning” for love of country. Democracy, apparently, has a new sheen.

For me, like many American Jews who worry about the rise of global anti-Semitism and the dangers of brutal Islamic extremism, this election cycle has proven to be a very difficult moral dilemma. Like it or not, the attitude, no less the policies, of the United States towards Israel have a fundamental effect on the status of the one and only homeland of the Jewish people. At stake on the world stage are no less its struggle for survival, indeed its very legitimacy that becomes increasingly existential with every passing threat. In years past, American Jews have by an overwhelming majority traditionally voted Democrat. There are many reasons both historic and philosophical why this is so, that I won’t try to address here, but suffice it to say, it is a well established demographic and historical fact.

American Jews, however, like other groups of voters, have never been monolithic. And just like other groups, we as voters tend to sort ourselves out based on our life experience, social backgrounds, economic priorities and education, with one unique exception. As we enter the voting booth, many of us also ask ourselves that one extra question that goes to the core of our unique identity: which candidate will be best for Israel? If you’re looking for the answer to that question here, you won’t find it. Don’t skip to the end, the title isn’t a giveaway, there’s no magical Hogwarts sorting hat, there is no shortcut.

But if I may humbly offer some guidance through this tumultuous and distressful election, read on. This time, I believe there is a deeper, greater challenge for us as both individuals and as a people than which “team” to root for, that will require some soul searching for what it truly means to be Jewish. And what better time of year for that reflection, than right on the heels of the “days of awe” of Rosh Hashanah and Yom Kippur.

If you know me or have read any of my previous blogs, you have some idea of the ideological journey I have taken since becoming a US citizen in 2000 when I was proudly, finally able to cast my first vote. Yes, that’s right. The first ballot I ever cast as a US citizen, was in Florida, in 2000, for THAT election. In those days it was pretty much a no-brainer. Before Obama, there was in fact another major historic breaking down of barriers, even if it wasn’t the top of the ticket. I still have my Gore-Lieberman yarmulke and my Hebrew transliterated bumper stickers and badges. I even have a picture shaking hands with Mr. Lieberman. I was all in. None of us could ever have imagined the colossal incompetence which threw our country into a constitutional crisis, that I would venture to say we still haven’t fully recovered from, and none of us ever wish to revisit.

Since then, we’ve had 9/11, the Afghanistan war (right war, wrong time), the Iraq War (wrong war, right time) a Wall Street/economic breakdown, a banking crisis, a housing market meltdown and gridlocked congressional partisanship looking to exploit all of it (wrong war, wrong time, all the time).

And while we were busy shouting at each other on cable news and social media, serving the ever-insatiable appetite of advertisers and ratings lords, we didn’t even notice the rest of the world was growing up without a parent. No leadership, no guiding principles, no vision, no policies, no rules of conduct. Just the blood sport of character assassination and hyperbole in the “Colosseum” of cable news, designed to keep you “rooting” for one side or the other. “Were you not entertained?” one might ask.

While the “pay to play” culture of the Clintons merits serious concern (though it is not my primary reservation with Hillary) and threatens the integrity and justice of a Democracy, our sages liken the one who accepts a bribe as a drunk. And interestingly, there is no specific form of punishment in our texts for the acceptance of a bribe, despite the uniquely emphasized admonition in the Torah of “Justice, justice! Shalt thou follow.” Our sages teach that the emphasis is enough because nothing in the Torah is repeated without merit, indicating that the penalty for such violation may simply be some imperceptible form of divine retribution. In popular culture, we might refer to such events as “karma.”

The corrupted are viewed by some as otherwise a perhaps perfectly wise and rational person, but intoxicated by the “drink” of power and privilege. When the drink wears off, there is often shame and an attempt to hide what one may have done while ״under the influence”. Justice is supposed to be blind to temptation. By contrast, however, the one who offers the bribe, is treated as the one who would put a “stumbling block before the blind”, a very serious offense with immediate and serious consequences.

Donald Trump has frequently boasted that he was once on the other side of the “pay to play” equation, peddling influence on politicians to suit his needs. Now in similar brazen fashion, he dismisses one of the basic pillars of our democracy: the peaceful transition of power by the acceptance of election results. A person who has no respect for such a fundamental tenet of our democracy in my opinion, has no business even voting, much less running for office. He has no shame. He would put a stumbling block before the blind.

We are duty bound as Americans to vote, and as Jews with free will to vote our conscience. If you want to vote for Trump because you believe he is better for Israel, I can respect that. If you want to vote for Hillary because you think she will keep the bedrock our democracy safe, even if corrupt, I can appreciate that too. Ultimately however, I find comfort in the words of one of my Rabbis who I have had many conversations with on this topic. The President of the United States does not protect Israel, the Almighty does. As long as the Jewish people are united, Israel will be fine. It is a very difficult choice we all face, and I don’t fault anyone for their beliefs or convictions. But in the end, we must remember again what it means to listen, and to listen to each other. We must return to the most quintessential directive of our faith —

About the Author
Nigel Spier is a practicing OB/GYN in Hollywood, Florida who has served as Chief of the Department of OB/GYN at Memorial Regional Hospital, President of the Broward County Medical Association and on the board of his local chapter of ARMDI. He is active in many Jewish organizations and charities and is an eternal optimist and advocate for reform, peace and global prosperity.
Comments