The Blogs
Shira Silkoff
Apply for a Blog
Advertisement
Please note that the posts on The Blogs are contributed by third parties. The opinions, facts and any media content in them are presented solely by the authors, and neither The Times of Israel nor its partners assume any responsibility for them. Please contact us in case of abuse. In case of abuse,
Report this post. 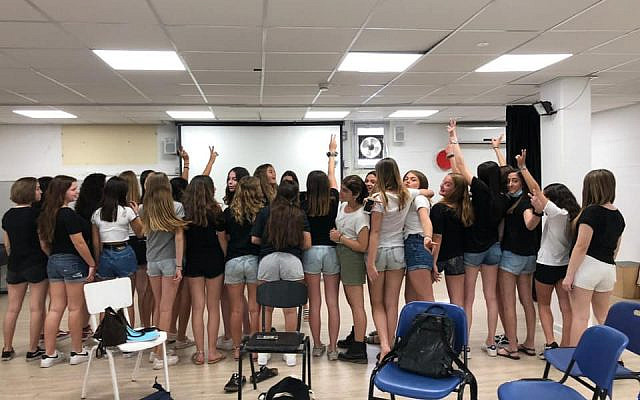 High school girls in Raanana, Israel protest their classmates being sent home for wearing shorts, in violation of the dress code, despite the unusually high summer temperatures. (Facebook)

If you live in Israel, I am almost certain that at some point during the last four days you have rolled your eyes and complained about the heat. If you haven’t, it must mean you haven’t ventured out of your cool air-conditioned apartment into the unseasonal 40 C heatwave.

For thousands of children across the country, this heatwave has coincided with their first week back at school after a two-month lockdown, and has presented additional problems to the already existing ones.

These problems came to light almost immediately, when, across the country, young girls started being sent home from school due to their inappropriate mode of dress. In too many schools, girls were sent home for wearing shorts, while boys wearing shorts entered freely.

This conversation takes place every year at the same time. It is an ongoing debate, one which men inevitably control. They insist that the teachers will be distracted by young girls in shorts, that the boys are incapable of concentrating if a girl next to them is comfortable and cool, and that it is a sign of a damaged generation, that they would even dare to imagine a world where they can dress how they want.

However, this year the conversation immediately changed tone, when a news story broke on the 19th of May, about a girl who had been forcefully humiliated by her teachers and peers, because of what she wore to school.

When her mother sent her to school in the morning in a sleeveless dress emblazoned with the school logo, she never imagined that just a few hours later, she would receive a call from her daughter, begging and crying to come home.

When she arrived to school she was told by her teachers that her dress was inappropriate, and violated the school dress code. In order to rectify this, she was given a shirt. Now, if the root of the problem had really been about uniform violations, she would have been told to put the shirt on over her dress, and that would have been the end of the story.

But it wasn’t about uniform violations, because it never is. It was about control, humiliation, and degradation. The 7-year-old child was instructed to remove her dress and wear nothing but the shirt and her underwear.

Except, unfortunately it isn’t, because this is just one instance, in one city, in one country.

This has happened countless times, in countless ways across the world, and will continue to happen until women are given back our own bodily autonomy, and are seen as equal to our peers, and male counterparts. This 7-year-old child will now have to deal with the repercussions of what was done to her for years to come. We cannot possibly know the level of the trauma she will experience from this.

The scale of the impact this will leave on her, from the teacher who was supposed to be there to build her up and teach her values, and to the classmates who are at just the right age to be as cruel as they possibly know how, is too much to measure.

Girls and women grow up knowing from all too young of an age that if we want something done, we are going to have to do it ourselves, because it is a rare day when a man in a position of power uses his voice for us.

Much to their credit, the schoolchildren of Israel are not different. Across the country, young girls have been using their power in numbers to come to school dressed appropriately for the weather, knowing that their teachers cannot possibly send every single girl home. In instances where this has failed, they have simply moved to stand outside the school buildings, chanting and protesting together, demanding equality in the classroom.

It also feels important to note that this is not the first time that children and teens have led the way when the adults in this country have failed them. In late 2019, we saw high-schoolers protesting in the middle of Tel Aviv against homophobic remarks made by then-education minister Rafi Peretz.

The age of believing that children, and young girls especially, should be seen and not heard is far behind us. Nevertheless, the outdated idea still persists, leaking its way into the education system, reminding girls that for every two steps they take, they will be forced to take one step back.

I am hopeful that the events of the last few days will lead to wider conversation, one which makes space for girls and women, and listens to our accounts and stories rather than just talking over them. Whether it will or not remains to be seen, but for now I am just hopeful that these young girls know that they are worthy of respect and of being treated as equals, regardless of what they choose to wear in 40 C heat.

About the Author
Shira Silkoff is a proud LGBT Olah Chadasha from the UK, who left behind their comfortable London life in 2017 in favour of the promised land. But promised to whom exactly? Their strong left-wing opinions have often left her wondering what Israel means to them, and she hopes to share these discoveries with the world at the same time as she stumbles upon them herself.
Related Topics
Related Posts
Comments