When you open your machzor this week on Rosh Hashanah, first take a moment to consider how the Hebrew letters on the page got there. For about 200 years, Jewish communities in America had to rely on European printers for their prayer books. Although the first known Hebrew printing here occurred in 1640, the “Bay Psalm Book” was intended for Christian users, as was a Hebrew grammar book used at Harvard College in 1735. 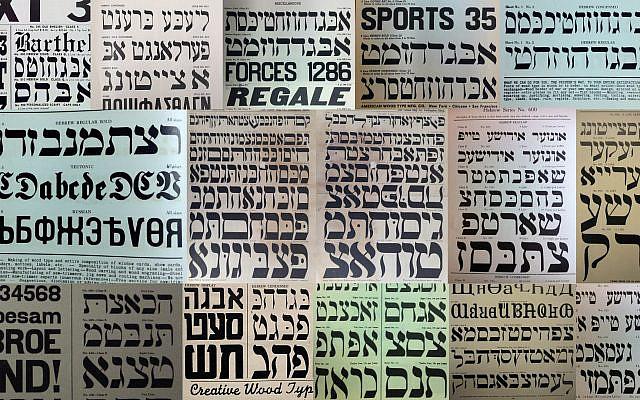 Now because of an innovative program of the Rochester Institute of Technology’s Cary Graphic Arts Collection, intriguing Jewish history and printing technology, graphic design and typography are intersecting in new ways. In 2014, the Cary acquired a rare collection of 40 Hebrew wooden type alphabets used by the Jewish-American press at the turn of the 20th century. Since then, it has embarked on a journey of discovery in the details of the beautiful letters, after meticulously cleaning them with the reliable Jewish kitchen staple known as Crisco. 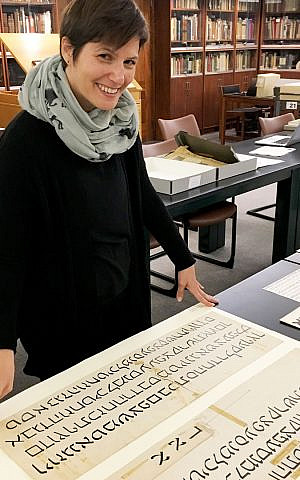 Shani Avni in the Cary Collection. Photo by Amelia Hugill-Fontanel

Shani Avni, the Ismar David Visiting Assistant Curator at the Cary Collection, explains that most of the early printers of Hebrew did not know the language, so they produced type trying to emulate handwritten scribal shapes.

Even later Jewish printers faced other challenges. Although today we would never run out of the Hebrew letter nun, for example, (a click of the keyboard will give us as many as we want), an American printer in the early 20th century might have turned a gimel into a nun by patching the wooden gimel at its bottom edge. Likewise, a single printed line or word might have Hebrew letters of different sizes, since print shops producing posters in Hebrew and Yiddish were limited by the amount of type they actually had on hand in a single size.

Why Preservation Through Use Matters. The RIT Cary Collection program involves hands-on experiential learning with old printing presses and type. “We can learn so much from actually using early print technology,” Avni tells her students. “It helps us understand why images and letters look the way they do and offers unique insight that you cannot learn by sitting in front of a computer. It answers questions you may not have even thought of asking.” 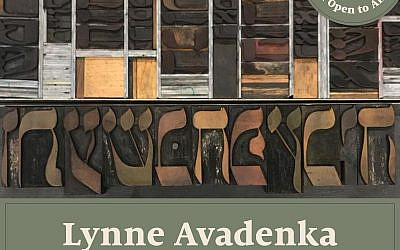 Register Now for Lynne Avadenka Visits the Cary Collection. One such question could be whether and how women were involved in the early stages of Hebrew printing. On September 1, Cary Collection Artist-in-Residence, Lynne Avedenka, will be presenting a public program on Zoom based on her extensive research on this topic. In this presentation, she will talk about the project and the prints she made at the Cary, which will be part of her 2022 solo exhibition at the Jewish Theological Seminary Library Gallery in New York City.  Click here for the free registration.

On any laptop today, we can choose from dozens of font styles. Until the early 20th century, Avni says, there was only one predominant Hebrew style of type. Known as “meruba,” which means “square” in Hebrew, it had none of the variations we take for granted, such as italics or script. In the world of wooden type, these existed mostly for languages with Latin-based letters. 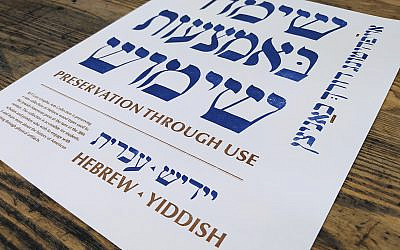 Multilingual Letterpress prints like this one highlight the commitment of Preservation Through Use. Image courtesy of the RIT Cary Graphic Arts Collection

The more we learn and engage with the beauty of the Hebrew alphabet, the greater our appreciation of how the letters themselves—and how they have been printed—are a treasure of Jewish cultural and religious life. Through its insightful commitment to preservation through use, the Cary Collection reminds us that even in the digital age, high-touch and high-tech can be a great combination.