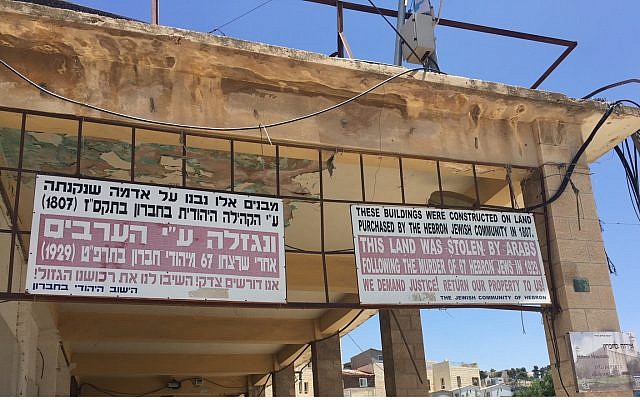 A building in Hebron. (courtesy)

Hebron is a complex city that ignites different feelings. At its core, Hebron is a religious city where Judaism and Islam’s forefather Abraham lived and bought property. King David began his rule there, and all of Judaism’s matriarchs and patriarchs are buried there. On a historic level, Arabs have lived in Hebron for hundreds of years. Jews have lived in Hebron for thousands of years. Tragically, Jews have been murdered in Hebron for just as long. My own family has felt this loss. A relative of ours was murdered in Hebron by Arab terrorists who called themselves Palestinian freedom fighters.

On the political level, Hebron is a city of conflict. The city is overwhelmingly populated by Arabs and a few hundred stalwart Jews who keep up the Jewish presence in the city. The center of the city hosts the Cave of The Patriarchs, the Maarat Hamachpielah. It is here that Adam and Eve, Abraham and Sarah, Isaac and Rebecca, and Jacob and Leah are buried. Centuries ago Herod built a large structure above their graves that is now used as a Mosque and Synagogue. This sacred place of prayer has been desecrated time and time again by acts of violence by both sides.

The area surrounding The Cave is a space of great sadness and dysfunction. What was once a bustling marketplace is now almost completely silent and desolate. After years of Palestinian Arab terror that brought the deaths of innocent Jews, a small area of a few streets are closed off. Almost all of the Arab shops are shuttered. Only Jews and a few local Arabs are found walking around. I can’t imagine the frustration of the Arab shop owners whose shops stand closed. Once a point of pride for their owners, these shuttered stores now stand as a testimony to the impossible circumstances they find themselves suffering. I’ve met these businessmen and listened to their stories. I feel for them. I’ve extended my hand in friendship. Most have accepted, only once was I rejected.

Israeli soldiers stand guard every few hundred meters through these empty streets. Their anxiety is written all over their faces. Violence has been known to strike at any moment in Hebron. Walking the silent streets from the Cave to the Jewish Museum a few blocks away feels like a walk through a ghost town. The tragedy of Hebron’s desolation hits home hard. One can imagine the streets once crowded.

Ironically, I’ve visited this city mostly with groups critical of Israel’s policies in Hebron. These groups exploit the silence of these few streets to promote their own agendas. They use the shuttered stores and the lack of Arabs walking the streets to demonize Israel as an unjust power that oppresses the local population.

These groups omit the Jewish history of the city. They portray the Jewish residents not as the returnees to their city that Arabs had occupied, but as extremists who have no right to live there – because they’re Jewish. They omit that property that Jews currently reside in has been legally purchased by Jews. These groups don’t mention the thousands of ongoing acts of terror the Arab population inflicts on the small Jewish minority of Hebron. They neglect to mention the corruption of the Palestinian Authority. It is this corruption, and not the Israeli policies, that hold the Hebron Arabs from advancing and improving their quality of life. They don’t mention that 97% of the city is open to Arabs but closed to Jews. They prefer to only visit the Jewish kilometer of the city and showcase it as if the entire city looked like these few streets. The hide the rest of Arab Hebron, with its stores and businesses open to the Arab population.

Of all the lies these groups tell, their characterization of the Jews of Hebron as extremist terrorists is the worst lie of all. Twenty five years ago an evil, and probably deranged, Jew committed the ultimate sin. He desecrated The Cave and God’s name by murdering 29 Arab Muslims as they prayed. While there are small and minor groups of extremist Jews who approve of this terrorist, the overwhelming majority of Jews consider him evil. To those who listen and believe the anti-Israel groups, one would think the entire population of Hebron, nearby Kiryat Arba and the entire settlement movement admires him and his act. Nothing could be further from the truth. This terrorist’s place in Jewish history is relegated among Judaism’s worst people and his name is mentioned in shame.

The city of Hebron is occupied by unending tragedy. I will not fall trap to the knee jerk response of demonizing the Jews or Arabs of Hebron. As one of Israel’s most sacred cities, Hebron should be a city of peace between the brotherly religions of Judaism and Islam. The two religions share the patriarch Abraham. His lesson of ethical monotheism should unite the two peoples. Unfortunately the city is occupied by dysfunctional violence. Its people are exploited by the most extreme among them. Israel is forced to restrict movement of the Jewish and Arab residents due to legitimate security concerns and both people suffer from the results. A visit to Hebron should be uplifting and inspiring. Unfortunately for me, the inspiration I experience is marred by the human tragedy I witness. Until the extremists are marginalized, this city will continue to exist as a tragedy.