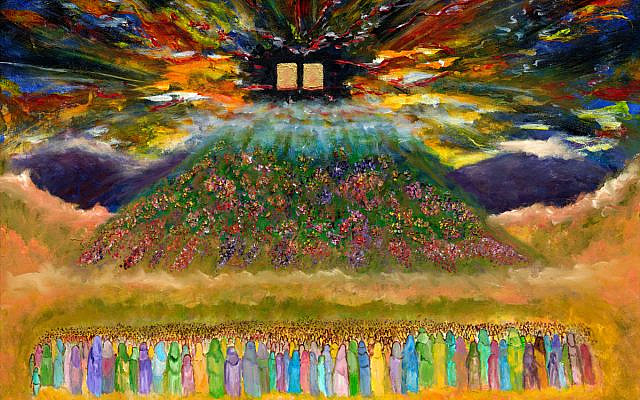 The word for belonging to no one is hefker – wilderness, midbar, is a makom hefker, an un-owned, unbounded place. Hefker appears prominently twice in the cycles of Jewish observance. At the beginning of Passover, we declare that any chametz we still have on our premises is now “ownerless/hefker, like the dirt of the ground.” And in the Shemitah year, all produce, everything that grows from the ground, is automatically hefker, and can be eaten by anyone.

The wilderness is unbounded, open to all. Similarly, Rambam tells us that it is a violation of the Shemitah year to lock up or fence in one’s fields (Mishneh Torah, Hilkhot Shemitah 4:24). They need to be accessible not just to every person, but to any wild animal, because, the Torah says, “all her produce (that grows without cultivation) will be for you for eating, and for your servants and for your hired worker and your stranger and for your domesticated animal and for the wild animal of the field” (Lev 25:6).

This means that in Shemitah, our fields literally become a direct extension of wilderness, and must be restored to the state in which humanity has no special right to cordon off the land for itself.

Letting the wild animals into our fields is also one giant step in the direction of the covenant described by Hoshea between God and all the animals, and read this Shabbat in synagogues outside Israel: “I will break bow and sword and war from the land and they will all lie down in safety” (Hoshea 2:20). (It is also a great fixing of the “fear and terror” that is set upon the animals after the flood in Genesis 9.)

This principle also creates a strange paradox. Leviticus 25:5 says that in the Sabbatical year, “your set-aside grapevines n’zirekha you will not store/hoard tivtzor.” According to Rashi on Lev 25:5, this means that even though anything in the field can be harvested by anyone – including the owner of the field – if the owner intended in their mind to set aside particular grapevines for their own use, they are davka not allowed to eat any of the grapes from those vines.

This applies to words of Torah: if you learn them to share them and teach them, they can become yours, but if you “hoard” them and don’t put them to use for the benefit of others, they are not yours either.

The most elaborate explanation of this connection between wilderness and the giving of the Torah can be found in the 8th century book Midrash Tanchuma: “The Torah was given through three things: through fire, through water, and through wilderness. Through fire, as it says (in Exod. 19:18), ‘Now all of Mount Sinai was smoking…’ Through water, as it says (in Jud. 5:4), ‘YHVH, when You went forth from Seir… even the clouds dropped water.’ Through wilderness, as it says, ‘in the Sinai wilderness.’ And why, the midrash asks, was it given through these three things? Just as these are free (chinam) to all who come into the world, so too are the words of the Torah free to all who come into the world. Thus it said (in Isaiah 55:1), ‘Ho, all who are thirsty, come to the waters (of Torah); even if you have no money, come, get food, eat…without cost’ ” (Tanchuma, Bamidbar 6; also in Bamidbar Rabbah 1:7).

Isaiah’s vision of a gift economy is the true nature of wilderness. It is also literally a definition of the food system in the Shemitah year: if you are hungry, come gather without money.

So doesn’t this mean that Shemitah puts us all in the right state, literally and figuratively, to receive revelation, to renew the covenant? That’s a great question to meditate on, and it aligns with other deep ties between Shemitah and Sinai.

II. There are more answers in the midrash to the question, “why wilderness?” that illuminate what the midrash means by hefker.

The most succinct is this: “Why wilderness? Because whoever does not make themself ownerless (hefker) like the wilderness cannot acquire the Torah. Therefore it says, ‘in the Sinai wilderness’ ” (Midrash Tanchuma ibid.).

Why wilderness? Here are some other explanations:

The Shemitah also teaches us to treat everyone equally, rich or poor, Jewish or not-Jewish (Rambam, ibid., Rashi on Lev 25:6). This is not just a nice thought. According to Rashi (ibid.), hefker means that the rich and the poor may both take from whatever grows. That is why, according to Beit Hillel, if you declare goods to be ownerless in order to give them to the poor, but you don’t also give them to the rich, then they are not really hefker – because making something hefker must follow the same rules as Shemitah, rules ordaining equality between all (Mishnah Pe’ah 6:1).

Why wilderness? Other answers: Because the only one who can uphold the Torah is one who makes themself like the wilderness and separates from everything worldly (Bamidbar Rabbah 19:26). Because just like the wilderness is unsown and uncultivated, unburdened by human society, so too must a Torah scholar be unburdened, must be a true ben/bat chorin (Midrash Tanchuma Buber, ibid.). Of course, this is exactly how we are supposed to treat the land in a Shemitah year: leave it unsown and uncultivated.

The midrash tells us a few more things about what one must do to gain or uphold Torah. These include “standing oneself naked,” and “making oneself nothing.” And there are verses to remind us of these teachings, based on double meanings: “I, Wisdom, dwelled naked/clever” (Prov. 8:12) – because the word for naked and clever are the same; and “And Wisdom, from where may it be found?” (Job 28:12) – because in the literal verse, the word for “where,” mei’ayin, is like ayin, “nothing”, so the verse can be read as, “And Wisdom from nothingness can be found.” (Sotah 21b).

What most of these motifs have in common is not being bound by social norms and conventions – by things like hierarchy and status. Those are the same norms we are commanded to break in the Shemitah year, when every person and every animal can go into anyone’s field and take whatever produce they need, when everyone must be treated equally.

Why wilderness? Here are two answers from the Maharal (16th century).

2) But also, because Torah represents the highest fulfillment of what humanity can become, and its perfection is such that it contains within itself exactly what each person needs in order to reach that perfection. Therefore, Torah belongs to everyone (all humanity), rather than to no one (Tiferet Yisrael , 16:8).

In this Shemitah year, we begin reading the book of Numbers, Bamidbar, the day before the holiday of Shavuot. So in this year of 5782, the tie between these three realms of wilderness – Torah, and Shemitah – is directly woven into the cycle of our lives.

Can our “Shemitah consciousness” become a source of revelation itself? Perhaps that revelation would be about how to fulfill the Torah’s mission to create a sustainable world, a world where we “choose life”!

One more midrash: the first book of Kings says that Yoav (David’s general) was buried in his house “in the wilderness.” The Talmud asks, was his house a wilderness? Rather, it means that “he made his house open to all,” just as the wilderness is open to all (Sanhedrin 49a).

Yoav was known for savagery, not kindness (see II Samuel 2:19-23, II Samuel 20:9-12), but this kindness of welcoming the diversity of people to his home was important enough, according to this midrash, to become the defining feature of his life.

If we become like the wilderness, we become the very place in which Torah is revealed, and not just the subjects to whom Torah is revealed. If at first wilderness means venturing off alone and separating from society, and if secondly it comes to mean seeing all people as equal in relation to Torah (and the land), in its fullest expression, it will mean welcoming the diversity of human beings that make up society, the vulnerable, the poor, the stranger, as well as the diversity of species that make up this world, into the circle of revelation, into the home of one’s spirit.

May we be so blessed to travel those stages and reach those levels, so that when Hashem seeks a partner in revelation, the One will look upon us and say (to quote the end of this week’s haftarah) “you are My people.” and we will say, “You are my God.”

All these texts in Hebrew and English can be found here: www.sefaria.org/sheets/241167