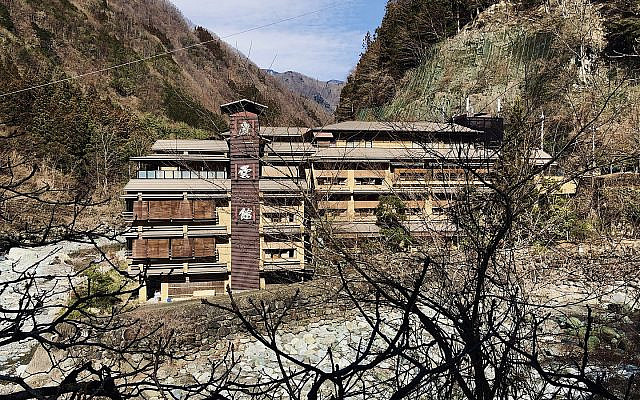 In the year 705 CE, Fujiwara Mahito, the son of an advisor to the 38th emperor of Japan, Tenji, was walking through the Japanese Kai Mountain region, near Mount Fuji, when he discovered a hot spring (“onsen”).  Fujiwara was so refreshed by the spring that he decided it had healing powers, and he built a small inn on the spot. Later, he built a road to reach this mountain destination. He encouraged both the local townsfolk and weary military commanders to come and take the waters.

The year 705 was during the brief Keiun era, during the reign of Monmu-tenno, so the inn was dubbed Keiunkan. The full name of the hotel is Nishiyama Onsen Keiunkan.

The hotel is certified by the Guinness Book of World Records as, “The world’s most historical inn.” The inn opened its doors before the first Japanese coins were minted. Guests would barter items such as rice or arrowheads to stay at the Hakuho Springs.

The year 705 was the year that Justinian II conquered Constantinople. The nine-year-old Prince Osred of Northumbria defeated Eadwulf I and became king, assisted by bishop Wilfrid. In the Middle East, the Umayyad Caliphate started minting coins that replaced the former Bysnatine and Sassanian coins. In China, following a coup, Zhong Zong was placed on the throne, ending the Zhou dynasty and restoring the Tang dynasty. At about that time, Al-Walid I began construction of the Al-Aqsa Mosque in Jerusalem.

As you can imagine, the guest list at Nishiyama Onsen Keiunkan over the centuries has been quite impressive. Tokugawa Ieyasu, the founder of the last shogun dynasty that ruled Japan from 1600-1868, stayed there twice. Tokugawa Ieyasu ruled Japan from 1603-1605. One of his most formidable enemies, the samurai warlord, Takeda Shingen, known as the Tiger of Kai, stayed there for several nights. Some historians suspect that Tokugawa stayed there to meet a spy within Takeda’s army, which may have ultimately led to the samurai’s downfall and the unification of Japan.

The hotel is still in the same spot. Nowadays, it takes between 3-5 hours to get from Tokyo to the hotel. The road passes through a rocky valley, which is not particularly scenic, with fewer and fewer buildings the further you drive. But once you arrive, according to the reviews I have read, it is everything you would expect and more.

The place is relatively small, only 37 rooms. Each room has a traditional tamati-mat floor and futon. There is a moon viewing platform. Staff wear traditional Nibu-Shiki kimonos that originated in the eighth century. And of course, the baths and showers are there, with water coming straight from the hot spring, infused with sodium, sulfur, chlorides, and calcium nitrate, maintained at 40 degrees Celsius.

But this is not a travel blog. I’m not giving you recommendations for your next vacation (or maybe I am, but that’s not the point).

The truly remarkable thing about Keiunkan is that has been owned by the same family for the past 52 generations. Since the eighth century, the hotel has been passed from father to son without break. How incredible is that?

The current president of the hotel, Kenjiro Kawano is a direct descendant of Fujiwara Mahito who stumbled upon the mineral waters all those centuries ago.

Except that is not quite accurate. Ownership of the hotel was indeed passed from father to son. But often the son was not a biological descendant, but someone adopted as an adult to continue the family business. So, although the current owner is the great-great-great…grandson of Fujiwara Mahito, he may not be biologically related to him.

This practice, of adopting adults as heirs is widespread in Japan to this day. In fact, the vast majority of adoptions in Japan today are of men aged between 20-30. Usually, the adopted heir will first marry into the family, and then his father-in-law will legally adopt him.

There is a saying in Japan, “You can’t choose your sons, but you can choose your sons-in-law.” This practice of adopting an employee as a son who will take over the business has many practical advantages, including avoiding inheritance tax. Often the adopted son will inherit a family business even if there are also biological sons.

For example, the founder of Toyoda Automatic Loom Works, Toyoda Sakichi, was encouraged in the 1930s by his son, Kiichoro to branch out into the automotive industry. But Sakichi needed funding, so he arranged a marriage between his daughter and a young man from the Mitsui family, which had been an early investor in his looms. His new son-in-law changed his name from Kodama to Toyoda Rizaburo and in 1939 became the first president of the Toyota Motor Corporation. Kiichoro founded the car company, changed its name from Toyoda to Toyota and did eventually take over from his new brother as president. But he had to wait his turn.

Suzuki Osamu is the Chairman of the Suzuki Motor Corporation. He was born Osamu Matsuda and began as a loan officer in a local bank. But then he married the granddaughter of Michio Suzuki and was adopted as the heir of the company, changing his own name to Suzuki. He is actually the fourth generation of adopted sons to head Suzuki. His own son-in-law, Hirotaka Ono, was being groomed to take over the company, but died in 2007 aged 52. So the 92-year-old Osamu still heads the company.

Adopting a successor as an heir is a solution to the age-old question of inheritance that Moses grappled with in this week’s Torah reading of Pinchas.

Let God, Lord of spirits of all flesh, appoint a man over the congregation. Who will go out and come in before them, who will lead them and bring them; so that the congregation of God shall not be like sheep without a shepherd.

Moses said, ‘Now is the moment to ask for myself. If daughters inherit, then surely my sons can inherit my position.’

Your sons did their own thing and did not learn Torah. Joshua who served you is worthy to serve Israel.

The question of inheriting positions of leadership in Judaism is complicated. Traditionally, kingship was passed down from father to son, though after Jeroboam’s Revolt, the Northern Kingdom of Israel only had nine kings out of 19 who were the son of a previous king. But in the Kingdom of Judah, all the kings were descendants of King David.

Similarly, for the position of High Priest, the son of the previous High Priest would be first in line to inherit his father’s position, provided he was his equal in wisdom and fear of God.

Rambam (Hilchot Melachim 1:9) goes further and says that for any position of authority, a son is first in line to inherit the position, provided they are their father’s equal in wisdom or fear of God. And even if they are only their father’s heir in fear of God, they should still be appointed and taught the wisdom they lack.

However, throughout history, it was very rare for a religious leader to inherit his position from his father. In the days of the Mishna, the position of Nassi, which was both political and religious, was inherited by the sons of Hillel. But very few of the other rabbis mentioned had illustrious fathers. Similarly in the time of the Talmud, it was rare for sons to inherit the rabbinical position of their fathers. When we complete a tractate of Talmud, the prayer includes the names of Rav Pappa’s 10 sons, because they were the exception rather than the norm (and it is unclear whether they actually inherited their father’s position).

A historically significant question of inheritance was played out after the death of Rabbi Shneur Zalman of Liadi in 1812. He was the author of the Tanya, a foundational text of Hasidut, and the first Rebbe of the Chabad movement. He lived in the second generation after the founder of Hasidism, the Baal Shem Tov. When the Baal Shem Tov passed away, his closest disciples had taken over leadership of the nascent movement, rather than his own son Tzvi.

When Rabbi Shneur Zalman passed away his disciples were torn between following his son, Dov Ber (who moved to the town of Lubavichi which gave the movement its name), or the Rebbe’s closest student, Rabbi Aharon HaLevi of Strashelye.

Rabbi Aharon had been by Rabbi Shneur Zalman’s side for over 30 years. Many of the Hasidim left Liadi and followed him to Strashelye, because of his brilliance and his charisma.

Rabbi Aharon and Rabbi Dov Ber disagreed on the correct method of expressing emotion in prayer, and the correct way of teaching the kabbalistic wisdom of Hasidut. In many ways Rabbi Aharon was the intellectual heir of Rabbi Shneur Zalman.

Nowadays it is widely accepted in Hasidic circles that only a son or a close relative can replace a Rebbe. But at that time there was no clear tradition.

Rabbi Dov Ber passed away in 1827 and was replaced by Menachem Mendel Schneersohn, his son-in-law, who was also a grandson of Rabbi Shneur Zalman. Rabbi Aharon passed away in 1842. At that time, most of his disciples decided to return and become Hasidim of Rabbi Menachem Mendel, who they felt was his grandfather’s equal in Torah scholarship and fear of God. Rabbi Menachem Mendel is also known by the name of his most famous book, “Tzemach Tzedek” – “Righteous Scion” and he lived up to his title.

Many of us wish, like Moses, to have children worthy of continuing our work in the world. We hope our genes will live on and have a positive impact on the world. But sometimes that is not the way things work out, and instead our students take over from us. And as we learn from Joshua, that is also part of the Divine Plan.

My current series on WebYeshiva is entitled, “Rebuilding After Destruction Through Text” and is live every Tuesday. You can listen to the live or recorded Torah classes on WebYeshiva. I’ve also started sharing more of my Torah thoughts on Facebook. Follow my page, Rabbi Sedley.